Sometimes the most cathartic way for people to fight to secure and protect their freedom and future is to return to their past. That’s certainly the case for both the villainous Firefly family in the cult classic ‘House of 1000 Corpses’ series, which also includes its first follow-up, ‘The Devil’s Rejects,’ as well as its filmmaker, Rob Zombie. Now, on the eve of the theatrical release of the franchises’ second sequel, ‘3 From Hell,’ almost a decade-and-a-half after its immediate predecessor, the genre auteur is delving back into his early career. The new feature once again celebrates the next chapter of his most infamous characters in his most noteworthy and creative franchise.

Lionsgate and Saban Films is set to release ‘3 From Hell‘ in nearly 900 select movie theaters nationwide next week, on September 16, 17 and 18, 2019, through Fathom’s Digital Broadcast Network. Fathom Events will broadcast the unrated version of the next entry in the trilogy to theaters with each night featuring unique bonus content. Tickets for the September 16, 17 and 18 nationwide release of ‘3 From Hell’ are available at FathomEvents.com/3FromHell.

Brake generously took the time recently to talk about portraying Winslow Foxworth Coltrane, the recently reunited brother of Baby and Otis Firefly, in ‘3 From Hell,’ during an exclusive phone interview. Among other things, the actor discussed how Zombie is his favorite director to work with on movies, as the actor appreciates the filmmaker’s unique creative nature and drive.

The conversation began with Brake explaining why he was interested in playing Winslow in ‘3 From Hell.’ The draw for the actor was “Rob Zombie, first and foremost. This was the third time I worked with him,” after Brake starred in 2009’s ‘Halloween II’ and 2016’s ’31.’ “There’s no director that I say this about other than Rob Zombie, but I don’t even have to read the script” to agree to star in the movie.

The filmmaker “usually gives me a call or sends me a text, and he’ll ask, ‘What are you doing in May,’ or whenever the shoot’s going to be. I say, ‘Nothing, if you have something coming.’ So whenever Rob has something in mind for me, I’m on board, because I love working with him. He’s my absolute favorite director,” the performer revealed. He humbly added, “That’s not to take away from the other directors I’ve worked with, but if I had to pick one, it would without a doubt be Rob.”

Brake also shared that he knew about the legacy of ‘House of 1,000 Corpses’ and ‘The Devil’s Rejects’ before signing on to star in the upcoming feature. “So the fact that this movie was going to be the long-awaited sequel to those projects, and that I was going to be a part of it, was absolutely fantastic,” he further gushed. “Of course, the part was also great fun to do. When it comes to Rob, I’m in, no matter what.”

Following up on his relationship with Zombie, Brake once again emphasized that starring in ‘3 From Hell’ was “another fantastic experience; he’s just amazing! I’ve also worked with such incredibly great directors as (Steven) Spielberg, (Brian) de Palma, Ridley Scott and Frank Darabont, who started ‘The Walking Dead.’

“I’ve enjoyed working with them all, but if you made me pick my favorite, it would have to be Rob. He’s such a creative force, and whenever you’re with him, he just oozes creativity,” the actor continued. “So it’s incredible working with Rob.”

Brake, who then referred to his character as Foxy, described him as “a loose, crazy guy. We also had a lot of fun doing improvisation on this movie, which was great to do in character as Foxy. Whereas with ‘31,’ we stuck closer to what was written. So working on these two films was different in that way,” the performer shared.

“But Rob always write a good script to begin with, and he starts off shooting what was written. Rob will then encourage us actors to then explore the scene, and we come up with ideas. There were a number of times where he would come up to me after we did a few takes, and say to me, ‘Okay, this time, try this…,’ and he would whisper some ideas to me off-camera. He would then go back behind the camera and say, ‘Action!,'” Brake divulged.

“I’d then have about five seconds to pull it together and do some crazy monologue to Bill, who’s such a great actor. Sheri’s also a great actress, and would respond in improvisation back to me,” the actor added. “How much of that improv ends up in the film varies from bit to bit, but Rob definitely lets you go for it. You know when he’s enjoying it, because you can hear him laughing behind the camera, which is always a great thing. I think Jeff Daniel Phillips (who played the Warden of the prison the Firefly family serves their sentences in, and escapes from,) made Rob laugh more than any of the rest of us!”

The conversation then switched into one of the things that Brake enjoys the most about Zombie’s movies, which is how the filmmaker balances the gore with the comedy. “But I think you need that humor to offset the violence. Films are like life, which also has its moments of both horror and humor. If you have just one of them, it wouldn’t be true life,” the performer emphasized.

“What’s great is that Rob finds a balance between the two in his films. We shoot all of these crazy scenes, which have all of this madness and mayhem. But at the same time, we’re also having a great time, and laughing our heads off in between, and sometimes even in the middle of, takes,” Brake revealed. “I think having that balance is one of Rob’s many gifts as a writer-director.

Following up on his working relationship with Moseley and Moon Zombie, Brake gushed about how he loved building the sibling relationships with his two main co-stars. “One of the things that I felt, almost immediately when we started shooting, was the chemistry between the three of us,” he admitted. “You never know if that chemistry’s going to translate to the screen, but hopefully people will see that when they see the film. But the three of us had great chemistry on the set.

“I hadn’t worked with Bill before, so it was exciting to get to work with him for the first time on this movie. He’s a wonderful actor. I have worked with Sheri before (on ’31’), and I absolutely adore her, as both an actress and a person. When I did ’31’ with her, my favorite scenes are the ones at the end of the movie, when we’re together,” the actor enthusiastically shared. “They’re my favorite scenes because she’s brilliant in them. So I already knew how great she was going into (‘3 From Hell’). So to have the chance to play a whole different role opposite her, and to have her in a whole different role, which she’s a master at, was a whole lot of fun.”

Brake’s “first scene in this movie was with Bill and Sheri, and she walked in during the middle of the scene, in full Baby mode. I remember sitting there, thinking, she’s awesome. I then realized that the camera was on me, and I thought, oh, I have to be thinking as Foxy!,” the performer shared with a laugh. “Foxy was probably thinking the same thing, that this woman’s crazy, but cool.” 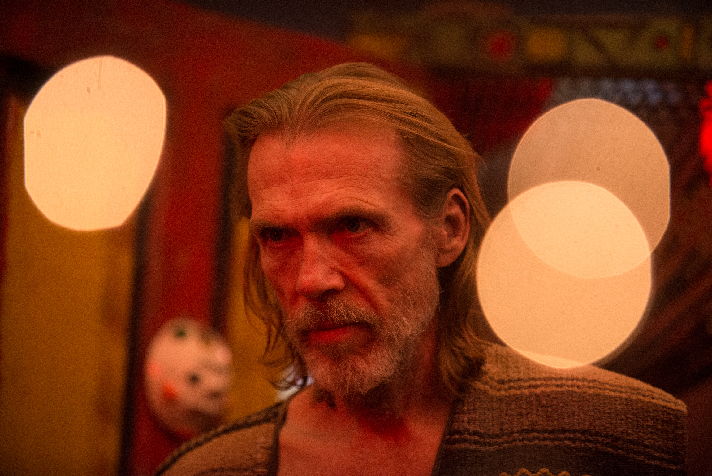