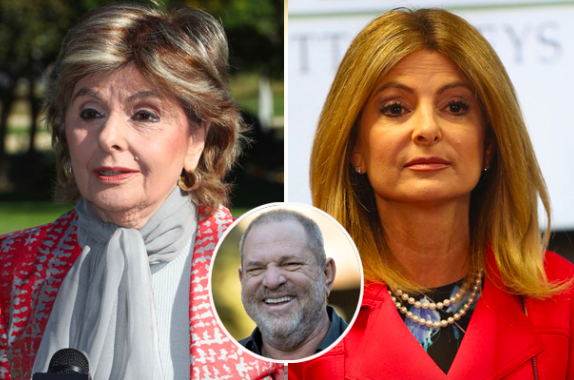 Another week another firing for the Allred Bloom Firm. This time, according to the New York Post, it’s a high profile accuser of the late Jeffrey Epstein who seemingly pulled the plug on Gloria Allred after the Harvey Weinstein stink around her just became too much. Earlier this week Bloom was fired from representing one of Usher’s herpes accusers in a very similar situation.

Rumors have swirled for weeks since the book She Said came out which detailed Bloom’s efforts to trash victims of serial rapist Weinstein by planting fake stories about them. One of her clients, Elizabth “Butterfield 8” Taylor is said to be considering firing her after the book came out–though she could easily also be firing her for Bloom having pushed her to perjure herself in a case aimed at FilmOn CEO Alki David. (The humiliation for Bloom in losing this trial can’t be overstated: Not only was David representing himself–he didn’t even make a closing argument–and still TV lawyer Bloom couldn’t convince the jury). Another Bloom client, Chasity [sic] Jones is thought to be considering firing her despite an earlier win as she faces David on appeal.

Refinery 29, quoted Busy Philipps saying she can’t imagine a client continuing to work with Bloom after the She Said revelations. (In truth, no one may have to bother firing Bloom if efforts to disbar her go through).

Some of the defections could be clients realizing they’ve led to believe false claims will go through on the strength of having the word “MeToo” attached to them. The tide has clearly turned on that money train for Bloom & Allred. In France, the originator of MeToo there was recently fined $20,000 for defamation of a man she accused.

Allred is also facing investigations by state bars that could result in her removal. The New York Post reported the Epstien victim situation, speculating that the Jane Doe fired Allred.

Even in the most current case in Los Angeles, Allred was too scared of the media to show up–or perhaps was asked not to by client Lauren “Beefeater” Reeves, who testified she drinks a bottle of gin a day sometimes. Instead she sent Nathan “Droople” Goldberg.

One visitor to the courthouse overheard Reeves yelling at Goldberg in the elevator after he seriously botched the examination of one witness, Jake “Cum Ghost” Weisman. The theory in the halls is that Goldberg coached Wiesman to perjure himself when he said he saw Reeves get choked to the point where she couldn’t breathe, and that her accuser said, “I want to fuck you violently.” The testimony was such a stretch that even Reeves, who is known to have a very shaky relationship with the truth, was not amused. Goldberg himself is so visibly flustered and out of control in Judge T.A. Greene’s courtroom in Los Angeles, it wouldn’t be surprising if he quits or is fired soon.