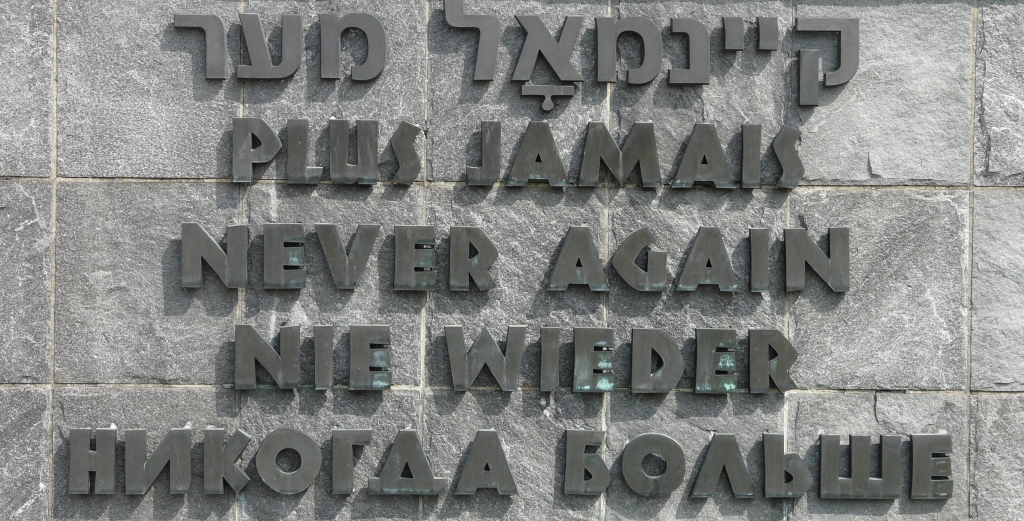 This marvelous film has been released under the radar.

“Never Again is Now” is expertly edited to combine archival films of Hitler and the war with life in Europe today. After the racist attacks and ultimately the deaths of six millions Jews 1941-45, the slogan “Never Again” was heard throughout the world. Those of us who are Jews and people who have moral firmness in their spines thought that we had heard the last of atrocities like those culminating seven decades ago.

Looking now at Europe, we may find it difficult to imagine that France has been the locale of terrible beatings and bombings against Jewish sites, but it’s even more surprising that anti-Semitic attacks are taking place in the Netherlands, particularly in Amsterdam and the Hague. Most of the violence comes from the growing Muslim populations in Europe, but the traditional citizens of sites like Amsterdam and Paris have sometimes caught the disease. We Geert Wilders, leader of the Dutch Party for Freedom, raining criticism of his country’s Muslims. We generally believe that far right politicians in Europe are themselves anti-Semitic, but in this case he receives a filmed audience from the Jewish director.

The most important concept emerging from the film is from Ayaan Hirsi Ali, a Muslim born in Somalia who had left for Europe and ultimately the United States. When interviewed by Evelyn Markus, the director, who asked whether anti-Semitic incidents would have occurred if there were no Israel, Hirsi Ali delivered a nuanced reply that anti-Semitic sentiment lies buried in some people, with Israel serving merely as an excuse to demonstrate. Hey, it’s not as though everything was peachy for the Jews before the creation of Israel. People have had a need for scapegoats long before the last two centuries and have found victims among minority groups like the Armenians in Turkey, the Rohinga in Myanmar, the Romani in Europe, the Coptic Christians in Egypt, and the Hutus against the Tutsis in Rwanda—among so many others.

Personalizing the film, Evelyn Markus spoke of her parents’ surviving the Holocaust, her mother liberated while on a cattle car heading to a death camp in Eastern Germany. Markus, who notes that she is not only Jewish but gay (her partner, Rosa Zeegers, enjoys a large role, sharing a home with the director for decades.) The two are dismayed that often violent demonstrations against Jews—not Zionists, necessarily, not Israelis, but diaspora Jews—have made their former country unrecognizable thanks to loud demonstrations by Muslims who shout “Kill the Jews wherever they live.” Even non-Jews are marked for assassination if they are critical of Islam. Theo Van Gogh, a Dutch filmmaker critical of Islam in a short doc, was assassinated: stabbed by a jihadist with an anti-Semitic note stuck to his chest. Zeegers, who had passed by a pro-Palestinian demonstration, could scarcely believe the calls of “Hamas, Hamas, Jews to the gas,” a shout which by the way was duplicated even in football stadiums by the visiting teams.

Still it’s refreshing to hear that most Muslims living in Europe and the U.S. go about their business and are not political, and that a few, like the wonderful Ayaan Hirsi Ali, note that violent demonstrators are not in the spirit of Islam, that they are caused by political Islamists. To prove a point—and without extra dialogue—Markus films a sign during a demonstration that calls for Sharia in the Netherlands! So: that’s what you get when you allow too many political Islamists into your country. Instead of gratitude, they would like to overthrow the government, cover women, maybe even ban music, movies, and “Western” culture. It’s almost enough to turn people on the left political spectrum to become conservative.

By quoting the anti-Nazi Dietrich Bonhoeffer “Silence in the face of evil is itself evil,” Markus appears to want us to speak up against, well, evil. People are speaking up, but that does not seem to cut much ice in Europe. At least here in the U.S. where Jews can still walk with kipot on heads, even tallit on their bodies, we could use an administration in D.C. that does not consider the neo-Nazis marching in Charlottesville to be “fine people.”

This documentary is vivid, it’s riveting, even mesmerizing. It’s a call to action but it does not really tell us what we can do to end the growing divisions in our society since free speech makes the situation even worse. Can anyone?