Vanishing witnesses, a sketchy shrink, the courthouse debut of the Mangina, and the laughable bungling by Nathan Goldberg as Allred Maroko & Goldberg and Lisa Bloom collaborate in a cynical exploitation of the MeToo movement for profit 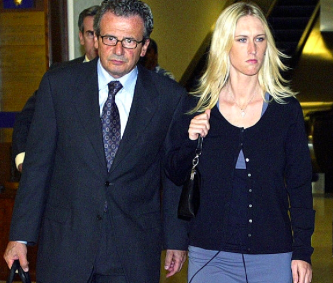 It’s been another crazy trial. And much has been made of Alki David’s unorthodox behavior in Judge T.A. Greene’s courtroom. He often is unable to contain what he says is his disgust at the false allegations being hurled at him by sputtering Nathan Goldberg who is representing former employee Lauren Reeves. In fact David’s attorney Ellyn Garofolo has expertly exposed bald lies and contradictions in the testimony by plaintiff’s witnesses.

1. Lord of the Freaks
Lauren Reeves worked at FilmOn twice. Once in a period spanning 2014 and 2015 and once in 2016. In between those two stints, Reeves attended the red carpet premiere at the Egyptian Theater in Hollywood of the mockumentary about the FilmOn workplace, Lord of the Freaks.

The film, though depicting an exaggerated version of Alki David and things that happened on his BattleCam channel, is shock content, often funny, and it’s clear that everyone at the office is involved in the production of this kind of content. Watch the Lord of the Freaks trailer here. That’s why the jury has visibly scoffed at Reeve’s claims she had no idea what kind of content was being made at FilmOn.

2. The Witnesses that Backfired

The witnesses called by Goldberg all blew up in his face. Jake Weisman, director of the movie Cum Ghost starring Carmen Electra, gave an account of a meeting on Canon Drive in Beverly Hills that contradicted Reeve’s own account, claiming David had actually choked and that she couldn’t breathe and added dialogue that had not appeared in any deposition. In fact, evidence entered into the trial, texts between Wiesman and Reeves, show that they were lightheartedly joking about the meeting the next day. (David testified he put his hand gently on her shoulder and quoted a line from “The Jungle Book” for comic effect: “Look into my eyes…” Witnesses in the trial confirmed that David would frequently do this, quoting Mowgli as if he might hypnotize you, as a joke with many employees.)

3. The Shrink Who Shrunk

Goldberg’s next witness further damaged Wiesnam and Reeves’ credibility. Dr. Buf Cindy Meyer of UCLA, who has testified for Allred Maroko & Goldberg some 30 times and testified she expected to be paid for her time in court on Reeves’ behalf too, said Reeves had never given a similar account as Jake Wiesman had. Reeves was referred by Goldberg the day after the firm agreed to take her case, and the firm paid for her therapy sessions over three years, racking up at least $19,000.

Meyers also said that Reeves accounts in the three years of therapy sessions of her last day working at FilmOn were much milder than Reeves presented in court. The plaintiffs seem to be confused about whether they want to say the door was closed or open in the office where she was meeting with David. (Their witness, a VP of Sales, said it was open).

Meyers also testified that Reeves’ grip on reality seems very shaky. That her purported fears of Alki David are paranoid delusions that are not his fault. And that she told fantastical tales in their therapy sessions.

Meyers is just collateral damage to Goldberg–she did such a bad job in this case, from a plaintiff’s perspective, it’s unlikely she’ll be asked back to be a professional witness again. Sources involved with UCLA told Shockya they’re considering opening an investigation into her behavior.

Meyers also stated, very clearly, that Reeves’ drinking problem (she stated that she drinks a bottle of Beefeater’s gin a day), and her paranoid behavior (she often imagines people are hiding in bushes and going to jump out and kill her) and other symptoms of PTSD, stem from her abuse as a child in Alaska, where her 7-foot tall goldminer father would beat her with a belt and make her shovel snow in 40 below winters. Reeves was further abused by a boyfirend called T.J. who threatened to kill her and beat her.

At the beginning of the trial Goldbeg had scheduled Chasity [sic] Jones and Elizbath Taylor to testify–both clients of his partner Gloria Allred’s daughter, Lisa Bloom who have sued David.

The point of having them was to let them make their own, unrelated allegations, which is a kind of character assasination only allowed in sexual harassment cases. In fact, these witnesses who have their own financial gain in mind, are called “MeToo” witnesses.

Mysteriously, they disappeared mid-trial. The defense tried to subpoena Taylor, intending to put her on the stand to show how Jones, Taylor, Reeves and other colluded with the Bloom Firm and Allred Maroko & Goldberg to work together on their allegations against David. (Texts among them offer payment and jobs in exchange for testimony, and in one case say, “You will get money and you won’t have to go to trial.”) But Taylor evaded the defenses subpoena–despite having just been at trial for 30 days a month before.

“I can only surmise,” said Venable’s Ellyn Garofolo to Judge Greene. “That the plaintiff knew the evidence of conspiracy was credible and didn’t want it to come out in the trial.”

(The only other explanation is that Garofolo had been so good at exposing Taylor and Jones’ lies in the previous case–which ended in a mistrial in Alki David’s favor 8-4–that Goldberg was scared to have them examined by Garofolo on the stand again.)

David has made it very clear he is working on a suit against the Bloom Firm and Allred Maroko & Goldberg for their role in this conspiracy including offering witnesses cash for testimony.

6. How Bloom and Allred Got Happy With Harvey

At the beginning of all this the book She Said came out which exposed Lisa Bloom’s horrific behavior on behalf of accused serial rapist Harvey Weinstein. In memos to Harvey, Bloom mocks her former MeToo clients, saying they were lying and crazy. She also plots out a way to use social media and planted stories to damage Harvey’s victims such as Rose McGowan.
Many have called for Bloom to be disbarred over these actions. Jezebel called her “A bad feminist.” Mama Allred is also on the hook for arranging hush money payments to protect Harvey Wienstien–huge payouts of which she likely pocketed a whopping 49%.

7. Comedy and The Mangina

The defense showed that FilmOn was producing irreverent and sometimes distasteful comedy at it’s office and studio in Beverly Hills. It had been for years, and Reeves was brought to FilmOn by a veteran of the company for her comedy skills. Garofolo showed that the office camaraderie Reeves uses in her allegations was the day-to-day tone of every work day, for every employee at FilmOn. Humor of the type intended for the shows being produced was constantly being workshopped. Alki David’s jokes to Reeves were the same jokes he told many other employees. And Garofolo showed that Reeves knew they were jokes and participated in the joking the whole time she worked at FilmOn. The Mangina, a comical stunt David pulled at the office, was never targeted at Reeves in any way–and by the way, contrary to Goldberg’s limp closing argument, never involved nudity.

Meanwhile, Alki David is sponsoring legislation before Congress that would give civil employment cases the same common sense privacy rules that family, medical and insurance law have. Read about that in the Washington Times. He makes it very clear he values the MeToo movement—but sees Bloom and Allred as predatory profiteers cynically exploiting the movement and their own clients for cash.

That’s it. We’ll see soon if the Jury was bamboozled by Goldberg’s meandering and spastic diatribes or saw this for what Alki David convincingly showed it to be: A con job.