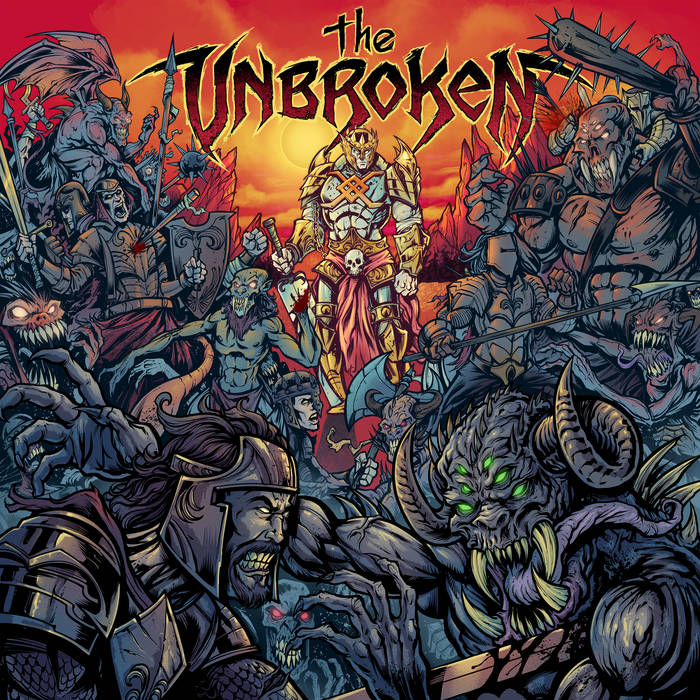 The cover for The Unbroken’s heavy metal EP, ‘Human Crown.’

Being apprehensive over not just how leaders are manipulating the general population, but also the mindless way the public is undoubtedly following those rulers, is a powerful emotion is modern society. The musicians of the up-and-coming Brooklyn-based quartet, The Unbroken, is sharing their qualms over the way current culture is relegating to past times in certain respects on their recently released heavy metal debut EP, ‘Human Crown.’ The new five-track album from the band, which is led by lead vocalist, Chester Oszustowicz, is proving what a progressive stance they have on liberating the masses from unquestionably following officials.

The Unbroken is also unique in the fact that it’s a daring group that’s dedicated to punk rock ethics through its dominating, modern metal sound. The musicians’ potent vocals and instrumentation, as well as their compelling lyrics, have been guided in part by their influences, including Metallica, Pantera and Slipknot. But the rising quartet also adds their compelling own blend of pulsating metal-punk rock sounds with surprising moments of soulful emotions, which will surely leave many fans of the genre captivated.

‘Human Crown’ begins with its distinguished first entry, ‘Stuck In The Way.’ The song features a masterful command of the guitars and drums, which effortlessly support Oszustowicz’s heavy metal vocals. The singer emotes his objection over how the person he’s been involved with has failed to live up to their potential and the promises they made. He also proclaims that their dreams have never been fulfilled because the person he’s been with has been self-deceiving. The other person has also chased everybody who cares away, so now there’s nothing to left save. Oszustowicz also emotionally proclaims that he wants more out of life than what he was given, and they won’t be able to grow until they overcome their limiting ways.

‘Stuck In The Way’ then leads into the hard-rock-driven tune, ‘Suffering In Silence.’ The sophomore track, which is one of the best entries on The Unbroken’s debut EP, features classic ’80s instrumentation that support Oszustowicz’s clearer vocals, which help raise the band feel more commercial. The vocalist emotes that he isn’t afraid to accept the sentence he receives, as he won’t pass the blame for his actions. He further shares his true nature when he proclaims that he’ll shine in the darkness.

‘Human Crown’ then transitions into its middle-and title-track, which opens with a surprising, soulful rock guitar introduction. The unique song chronicles how people shouldn’t be proud when they turn their back on everybody, especially when they easily believe, and follow, all the headlines without question. Oszustowicz warns his listeners that people will continue dying unjustly if the human condition doesn’t improve.

The Unbroken’s record begins to wind down with the penultimate tune, ‘I Never Forget,’ on which Oszustowicz proclaims that he can’t easily take what everyone has been telling him. He further proclaims that he refuses to continue supporting political messages that only end up harming the masses, and he’s consumed by the hatred he feels for the wrongs committed against society by those who are in charge.

‘I Never Forget’ then transitions into ‘Nothing Left To Sell,’ the last entry on ‘Human Crown.’ Much like the EP’s title track, the last song is driven by soulful guitar riffs and drum strumming, as he declares that there’s no part of his soul left to sell, and he wants to forge own path in life, as he refuses to be repressed anymore.

Being concerned over not just how leaders are negatively influencing the general population, but also the automatic way the public is undeniably following those rulers, is a strong emotion is modern society. The musicians of The Unbroken are sharing their objections over the way current culture is relegating to past times in certain respects on ‘Human Crown.’ The new EP from the band is proving what a progressive stance Oszustowicz and his bandmates have on liberating the masses from unquestionably following officials.