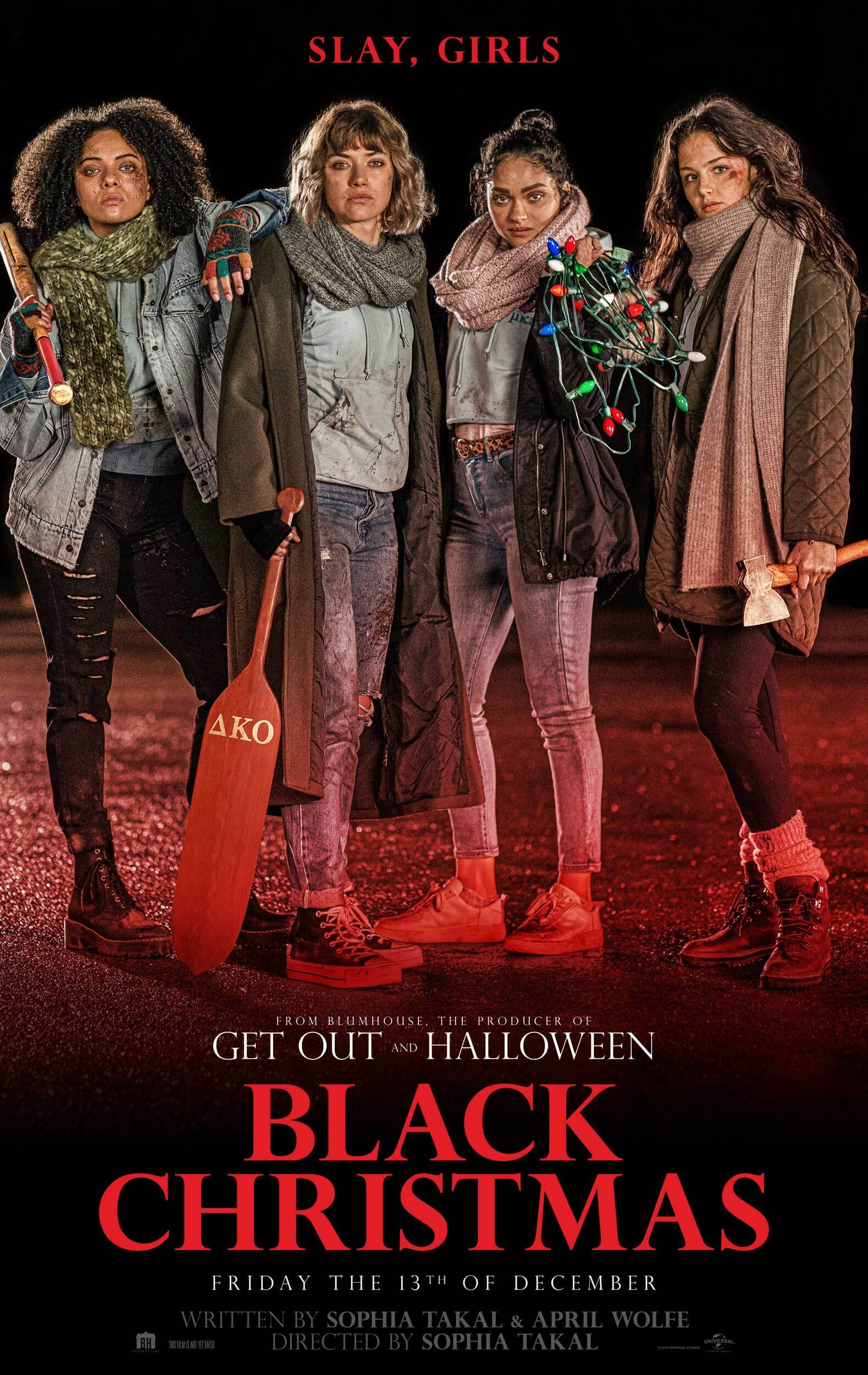 Slasher horror films make history and slay at the box office when they offer unique perspectives on protagonists’ will to survive. The new thriller, ‘Black Christmas,’ is doing just that by being a major studio horror movie that was directed by a woman, Sophia Takal, who also co-wrote the script with another female genre veteran, April Wolfe. The drama, which is a re-imagining of helmer Bob Clark’s 1974 cult classic film of the same name, offers a terrifying new take that’s subversive, edgy and anchored by a modern female perspective of women empowerment.

‘Black Christmas’ is set at the end of the fall semester at Hawthorne College, as its students are preparing for their last few finals before they head home. The sisters of the school’s Mu Kappa Epsilon (MKE) sorority, including strong-willed Riley Stone (Imogen Poots), athlete Marty (Lily Donoghue), fearless rebel leader Kris (Aleyse Shannon) and the always positive Jesse (Brittany O’Grady), prepare to celebrate the holidays by attending several parties on campus. Riley is a bit apprehensive about attending the festivities, however, as she’s still contending with being assaulted by former AKO fraternity president, Brian Huntley (Ryan McIntyre), a couple of years ago.

While Riley is supported by her MKE sisters to fight back against Brian and the other men who are repressing women, a mysterious black-masked stalker begins killing some of their fellow sorority members. As the body count rises, Riley and her friends begin to question whether they can trust any man, including Marty’s beta-male boyfriend, Nate (Simon Mead); Riley’s new crush, Landon (Caleb Eberhardt); and even their esteemed classic literature instructor, Professor Gelson (Cary Elwes). Whoever the killer is, he’s about to discover that the young women aren’t afraid to fight back, and protect themselves from becoming a victim.

Takal and Wolfe generously took the time recently to talk about co-scribing and helming ‘Black Christmas’ during individual phone interviews. Among other things, the filmmakers discussed how when they decided to co-pen the new version of ‘Black Christmas,’ they felt it was important to pay homage to the original movie, while also creating their own story that reflects the modern sense of women empowerment and feminist bonding. The filmmakers also shared that they feel the characters, especially the leading females played by Poots, Shannon, Donoghue and O’Grady, were powerfully presented on screen, due in part to the actresses’ immediate connection with each other on the set in New Zealand.

The conversation with Takal began with her explaining why she decided to co-write the script for the new version of ‘Black Christmas,’ and what the process of collaborating with Wolfe on the screenplay was like. “Blumhouse approached me about making this movie early this year. They said, ‘We have the rights to ‘Black Christmas.’ We don’t have a script, but we’d like for it to come out this December,'” she shared with a laugh. “I was like, oh, that sounds scary!”

But the co-scribe revealed that she “was excited about the opportunity, because I love the original so much. I not only love the artfulness of the horror (in the first film), but also how fresh and contemporary this new movie is, and how it deals with women’s issues and politics. So I thought it would be great to have the opportunity to tell a story that’s equally fresh and modern for 2019, and also inspired by the (original) movie.”

So Takal “began writing a few drafts, but I wasn’t particularly happy with what (I had written) on my own. So I then approached April Wolfe, who’s a wonderful writer, as both a film critic and screenwriter. She’s also very familiar with the horror world,” she explained.

“We talked about how to make a movie that’s fresh and contemporary, in terms of the female characters, and what women are going through now,” the co-writer added. “The first ‘Black Christmas’ is one of the original slasher movies…so we wanted to move the slasher genre forward, and talked about how we could do that.”

When Wolfe agreed to help Takal co-scribe the new version of ‘Black Christmas,’ the duo felt it was important to pay homage to the original movie, while also creating their own story, like the director mentioned. Wolfe added that they didn’t “get hampered by the original, because if our story was going in a certain direction, then we had to follow where it was going. The way that we saw the characters that we created was that their issues in part laid in their dynamics, which brought them, and the overall story, in a different direction. Also, I love the original so much that I didn’t want to play around with it too much.”

The new movie is a unique slasher in the sense that it interweaves comedy into the horror and mystery elements of the overall dramatic story. Takal added why she felt it was important to include that comedy into the story. “We wanted to make something that was fun and lively, while also being scary. We also wanted to play with audience expectations of what it means to be a slasher movie in 2019.”

After co-penning the screenplay, Takal went on to direct the mystery thriller, which she described as being a “really fun time. The actors who I worked with, including Imogen, Aleyse, Lily and Brittany, were all so hard-working and talented. The crew was also so incredible. I worked with this great cinematographer, Mark Schwartzbard, who I’ve worked with before (on the 2016 horror film, ‘Always Shine’).

“We were all there on location in New Zealand, with the purpose of making this film together…I come from the indie world, so I wondered if that feeling of camaraderie and community that I had on my indie films was going to be there on a bigger studio movie like this one,” the helmer admitted. “It was there, which helped make it such a wonderful experience.”

Further speaking about the actresses, Takal then explained what the casting process was like for the drama. “Imogen was someone who I had wanted to work with for a really long time-I think she’s an extraordinary actress. So I sent the script to her, and luckily enough, she agreed to be in the movie. The other actresses all auditioned for their roles, and they were all my first choices for their parts.”

Once the performers signed on to appear in ‘Black Christmas,’ the director was able to spend some time with them, in order to build their characters’ bonds. “Since we shot the movie in New Zealand, the actresses flew in about a week early, and we did back-story improvisations.” She explained that “We took experiences that the characters may have had before the events of the movie started, and improvised what may have happened. That way, while we were shooting, they had a shared history and memories. That also created a sense of physical comfort between the women.”

Once the script and the casting were completed, Wolfe shared that she spent some time with Takal and the actresses on the set in New Zealand during the pre-production stage, before filming began. Wolfe was on hand to help by offering her ideas and guidance, while the director collaborated with the performers on their characters’ backstories and motivations. “It was great writing a script with the person who was then going on to direct it, because she knew whether or not she’d be able to bring it to life on the set,” Wolfe revealed.

Once principal photography began, Wolfe returned home to America, but was still available throughout the shoot to speak with Takal over the phone. The two would talk if the helmer felt a part of the story needed to be re-written, but didn’t have the time to do so herself.

Going back to the physicality between the women, as well as the process of working with the actresses to create the stunt work and action sequences, was something that Takal cherished. “I had a really great stunt coordinator, Jon Costelloe, who put together some incredible stunts. I think the actresses had a good time working with him, because he was patient, and never made them feel unsafe,” she shared.

Also further speaking of the fact that ‘Black Christmas’ was shot in New Zealand, the helmer called the experience of filming on location “really fun. It was a country I had never been to before. It felt like movie camp, because even the people who worked on the film who were from New Zealand lived in Auckland and Wellington, but we mainly shot on the South Island, so we were all away from our families,” which helped the cast and crew bond on the set.

The new reimagined version of ‘Black Christmas’ is also unique from the original film in the fact that it features a strong sense of women empowerment, Wolfe divulged. “The way that Sophia and I talk about feminism is really direct. We’re both very open about everything, and are of the same mind. Going in this certain directions felt really necessary…So, the way that we approached incorporating the feminism into the story felt very natural, even though we have different styles and writing tones.”

Cancel reply
Midnight Family Review: One way or another, you are urged to go along for the ride
The Women Film Critics Circle Awards 2019’s Best Movies
To Top