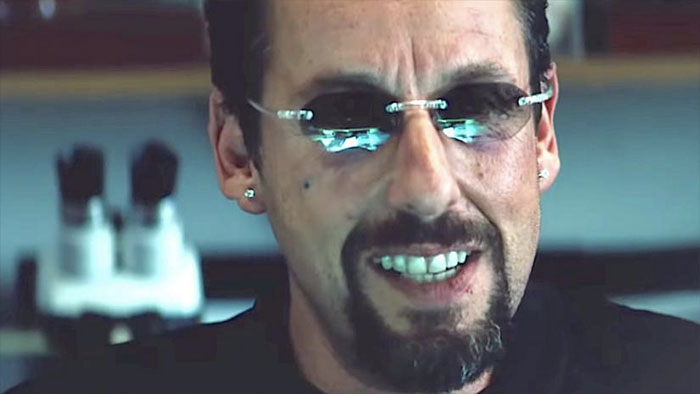 If you like your movies over-the-top like “The Wolf of Wall Street” and “Inglorious Basterds,” then has A24 a movie for you! The pace doesn’t let up for a second, the photography evokes New York on amphetamines, and Adam Sandler gives the performance of his lifetime. Yes, that Adam Sandler, moving up from a waterboy for a football team, a manchild with a stutter, to a jewelry merchant on New York’s 47th street with a gambling disability. “Uncut Gems,” directed by Josh Safdie and Benny Safdie following up their New York-centered pic “Good Time,” about an attempt by a guy to get his younger brother out of jail. Given that “Uncut Gems” shoots many of its scenes inside a midtown jewelry store which has a way of locking people inside, the Safdies are right in their métier.

Even if you have a hearing disability you’ll have no problem understanding the dialogue. The shouting is combination of the floor of the Chicago Futures Market and Donald J. Trump’s ersatz press conferences that are drowned out by his chopper. Anchoring the proceedings, Adam Sandler in the role of Howard Ratner knows and loves gem stones. He does not think that he could make the kind of life he wants at his desk in the back room, preferring to risk gambling on basketball games. He has faith that his main man, Kevin Garnett of the Boston Celtics (who plays himself), will sink enough baskets and pick up enough rebounds to make him an instant millionaire.

The shouting, in fact, starts right in the beginning, not in New York but in Ethiopia, where a large group of miners who had just extracted a fellow worker from a grievous accident. The bosses are getting hell for allowing unsafe conditions, but when two miners re-enter the tunnel they find a large rock with brilliant opal stones imbedded as though fashioned by an expert cutter.

On a hunch, Howard buys the rock, then lends it out to KG who convinces Howard that he will buy it. To contrast Howard with his long-suffering wife Dinah (Idina Menzel), who is aware that Harold has a woman, Julia (Julia Fox) on the side, the couple are at a theater to watch their daughter perform in a play. Dinah is sitting with her teen son, but Harold who should be with them, is running about outside, all in the service of making his fortune while at the same time avoiding or putting off his creditors.

Harold is larger than life, just like Trump, and like the president he is wrapped up in himself, playing a high-wire act that finds him tending to his business but more involved in actions that could make big trouble for him. He is a rabid sports fan, liking the Celts not as a mere hobby but as his chance to make it big financially. It would be nice to say that a win that bring him over a million dollars would allow him to retire, but you can bet that he will gamble it away within a month.

Daniel Lopatin’s score, particularly in the miners’ scenes, can be madly intrusive, making one wonder why the bold and furious action would not serve to excite the moviegoers. For Darius Khondji who is behind the lenses, no action that he captures is too fast. The ensemble cast are terrific, but wouldn’t it be great if Adam Sandler, seeking the big movie guild prizes this year, winds up competing for the over-the-topness with “Dolemite”’s Eddie Murphy?

Cancel reply
Baltic Tribes Set to Scare Audiences in Exclusive Trailer and Poster Premiere
Midnight Family Review: One way or another, you are urged to go along for the ride
To Top