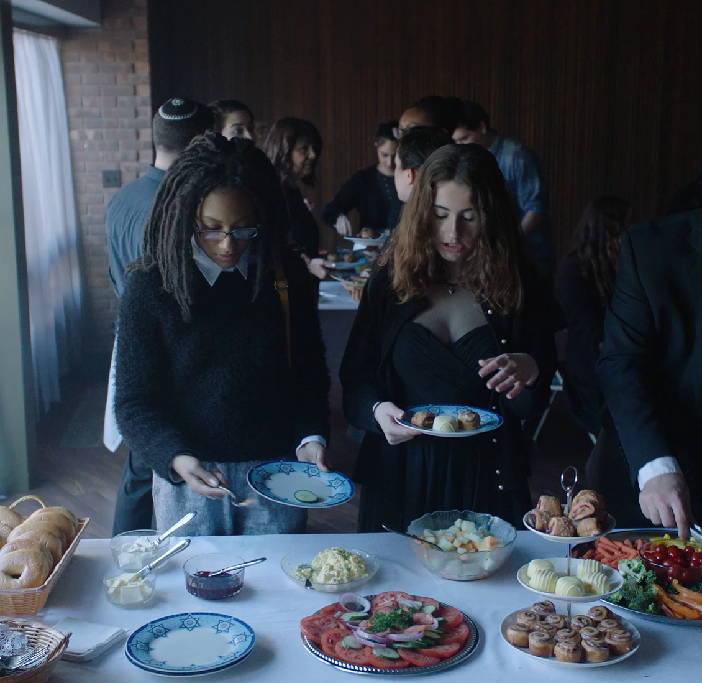 Crushing the standard field of vision that’s regularly showcased in movies, and fearlessly venturing into uncharted territory, is often an intimidating, but much needed, process. First-time feature film director, Olivia Peace stunning proved that there are still unexplored characters and storylines that need to be discussed in American cinema in her new drama, ‘Tahara.’

The coming-of-age ‘Tahara’ had its World Premiere this past Saturday night, January 25, during the 2020 Slamdance Film Festival. The movie is set to have its second screening during the festival tomorrow, January 28, at 6:15pm MST at the Treasure Mountain Inn Gallery in Park City, Utah.

‘Tahara’ follows Carrie Lowstein (Madeline Grey DeFreece) and Hannah Rosen (Rachel Sennott), who have been inseparable for as long as they can remember. When their former Hebrew school classmate, Samantha Goldstein, commits suicide, the two girls go to her funeral, as well as the “Teen Talk-back” session, which is designed to be an opportunity for them to understand grief through their faith. But, after an innocent kissing exercise turns Carrie’s world inside out, the best friends find themselves distracted by the teenage complications of lust, social status and wavering faith.

The drama, which Peace also edited, was written by Jess Zeidman. When the helmer first read the screenwriter’s script, she found that the story is a powerful manifestation of her tastes and lifestyle, as well as her inclinations as an artist.

Carrie is a black, Jewish, queer teenager who’s just beginning to explore her sexuality. In the process, she tries to understand how her romantic feelings towards Hannah will not only affect their friendship, but also her status in school. This type of protagonist has never truly been explored in coming-of-age stories on screen before. That made Peace the perfect filmmaker to direct the drama, as she’s also a black queer woman who’s just now able to explore her identity in a feature narrative.

Zeidman wasn’t afraid to infuse ‘Tahara’ with bold dialogue that courageously interweaves comedic elements into emotional circumstances. Those situations contend with issues that regularly plague adolescence, from unrequited lust to trying to maintain social status, as well as wavering faith and betrayal. While the story that’s told in the movie is set over the course of just one day, Carrie and Hannah experience a relatable roller coaster of emotions. They go from being platonic friends to being forced to cope with one-sided romantic admiration, and feeling hurt and mislead that they can’t truly communicate, despite being friends throughout their adolescence.

The friendship between Carrie and Hannah is gracefully brought to the screen by up-and-coming actresses, DeFreece and Sennott. The duo brought an authenticity to a friendship that has become unceremoniously familiar and mundane, as Hannah has inadvertently begun using Carrie as a way to get what she wants. It isn’t until Hannah purposefully took advantage of her relationship with Carrie to grab the attention from one of their classmates, Tristan Leibotwitz (Daniel Taveras), that Carrie finally realizes how self-serving her friend can be at times. The realization is a gripping shock that’s sure to stick with viewers who have also had to confront uncomfortable situations in their relationships.

‘Tahara’ is a heart-wrenching, but equally important and needed, drama that feels completely of the moment. Through DeFreece and Sennott’s impressive, compelling breakout roles as teenage girls who are grappling with their feelings about such vital topics as lust, social status, wavering faith and betrayal, the drama proves that there are still unrepresented characters and storylines that need to be discussed in American cinema. Even as a first-time director, Peace shows that she’s a filmmaker to watch; she built ‘Tahara’ on a foundation of diversity and inclusivity, both in front of, and behind, the camera, that’s representative of the entire world.