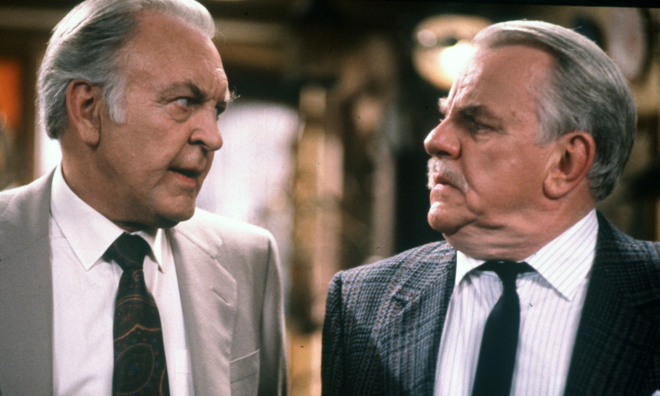 Actors Windsor Davies and Donald Sinden star in the British sitcom, ‘Never the Twain,’ which is airing on Forces TV.

Actors Windsor Davies and Donald Sinden’s characters are once again engaged in a game of one-upmanship, as their hit British sitcom, ‘Never the Twain,’ has been brought back to life on Forces TV. In honor of the one-year anniversary of Davies’ passing, the television network is broadcasting repeat episodes of the popular 1980s television comedy series.

Two episodes of ‘Never the Twain’ will be shown tonight, from 8-9pm local time, on the Forces TV channel on Filmon TV. On the first half-hour episode, which starts at 8pm, Davies’s character, Oliver, regrets an act of kindness when he offers to help a poorly Simon, who’s played by Sinden, recover from a cold. On the second half-hour episode, which starts at 8:30pm, Simon and Oliver create mayhem when Ringo (Derek Deadman) invites them to dinner, in hopes of impress his evening-class teacher.

The series follows antiques dealers Oliver and Simon, who are also bitter enemies. The two former business partners had a falling-out, but they remain next-door neighbors, both in their homes and shops.

‘Never the Twain’ can be watched live, or recorded and watched at a later time, on FilmOn’s Forces TV channel. FilmOn enables viewers to watch live and recorded UK and international television shows, movies and music videos in a variety of genres, including news, sports, drama, comedy, horror, lifestyle, shopping, pop, EDM and blues.

Cancel reply
Explore the Musical Journey of Ed Sheeran: Then to Now in Filmon TV’s Musical Television Special
Steven Chase Has Made New Friends in Stan the Man Exclusive Clip
To Top