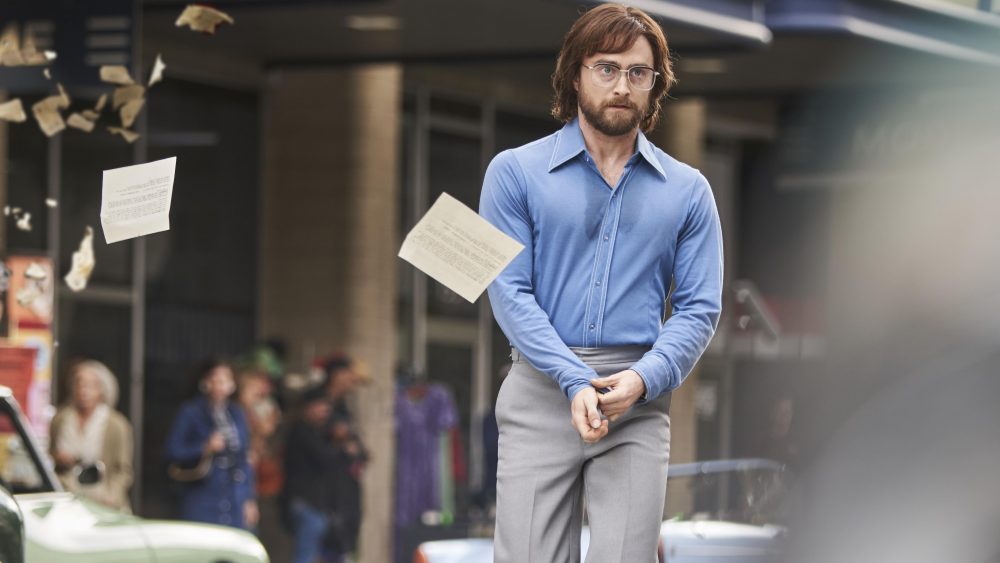 Whenever I need to have a key made I go to Bruno’s hardware down the block. Half the time the keys do not work. I twist and I turn and practically break the fragile metal. What this country needs is not more MBA’s but some good, reliable locksmiths. Now Tim Jenkin can make keys for me any time. He’s a real live character played by Daniel Radcliffe in the prison thriller “Escape from Pretoria.” He is not only a crackerjack locksmith but an author, having written the book by a similar name in 2005. I cannot tell whether Francis Annan’s movie is based closely on the contents of the book or simply inspired by the heroic plot—especially since on Amazon, the book costs $899.99. And that’s the paperback! Perhaps an upcoming movie about rare books “The Booksellers” would tell us why.

The film which is virtually bereft of women focuses on the leadership of Tim Jenkin (Daniel Radcliffe), who together with Stephen Lee (Daniel Webber) gets into trouble with white-dominated regime in South Africa when apartheid was the norm. Fifteen percent of the popular were white but dominated the 85% of people with color. The grip on the country was resisted by the African National Congress, under which Nelson Mandela eventually got elected president and now stands as one of history’s great heroes.

Some folks might be surprised to note that the ANC was a movement that enjoyed the membership of several white people, considered by the apartheid government to be traitors to their race. For example: when Jenkin and Lee set off an unusual string of “bombs” in Pretoria that liberate not explosives but reams of paper announcing the manifesto of the congress, they are caught and receive stiff sentences in a jail that was not quite as comfortable as the prisons in Norway. Jenkin gets 12 years as the leader, and his pal Lee receives eight. Inside the jail the two meet up with other whites involved in wresting the South African government away from the white leaders. These are people who from the moment they were beaten were determined to escape, notwithstanding the prospect of a sentence of another twenty-five years plus the potential to be tortured.

Theirs was a unique method. Jenkin, apparently graced with spatial skills, drew blueprints for not just one key but a successive battery of them that would lead them to the street and freedom. They keys were made of wood. As the plot thickens, the initial attempts to fit these keys into the doors would fail. Sometimes a piece of evidence would fall to the floor outside Jenkin’s reach, so we in the audience sit and hold out breaths as does Jenkin to hide the evidence from the regularly scheduled checks by the guards.

Guards were awfully mean, and not just the warden (Paul Harvey) who must be addressed as “Captain” by the inmates. They appear to hold a special animosity to whites who help the blacks.

All action takes place in 1979, but if the prisoners only had the patience to wait until 1994 when apartheid fell apart, Mandela would have freed all, a welcome break especially for Denis Goldberg (Ian Hart) who was serving four life sentences. Behind his large aviator type glasses fashionable at the time, Daniel Radcliffe is able to free himself without needing the magic he embraced at the Hogwarts School. He exudes a tension that should resonate with the movie audience in a film that’s not much on dialogue but which, guaranteed, will have you keyed up.