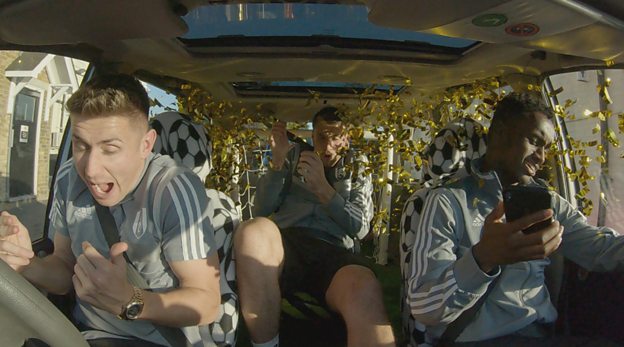 A scene from the BBC program, ‘Football Stars Ride in Bad Cars.’

Arriving to England’s most glamorous hot spots in style is definitely one of the major appeals of leading a rich lifestyle. But some of the country’s elite athletes realize that their chic style in transportation isn’t a relatable element for most of their fans. So local football stars have given up their flashy, expensive rides for a more economic car for the BBC program, ‘Football Stars in Bad Cars.’

As a part of Sport Relief 2020, several players from the football teams, Fulham FC and Norwich City, ditch their super cars for a £2k image-wrecking hatchback. Their experience is chronicled on ‘Football Stars in Bad Cars,’ during which a tricked-out Fiat Multipla arrives at Fulham FC while the athletes are training.

Teammates Tom Cairney, Steven Sessegnon and Marcus Bettinelli leave behind their own cars to drive the Fiat for the day, during which they play games set by BBC Radio 1’s Chris Stark on the car’s radio. The players then pass the car on to the Premier League’s Norwich City FC team, after they make it even more embarrassing to drive.

‘Football Stars in Bad Cars’ is set to air on the BBC One channel today on Filmon TV. (Note that the BBC One channel is only available to viewers in the UK). The show will be streamed tonight at 6:30-6:55pm local time. It can be watched live, or recorded and watched at a later time.