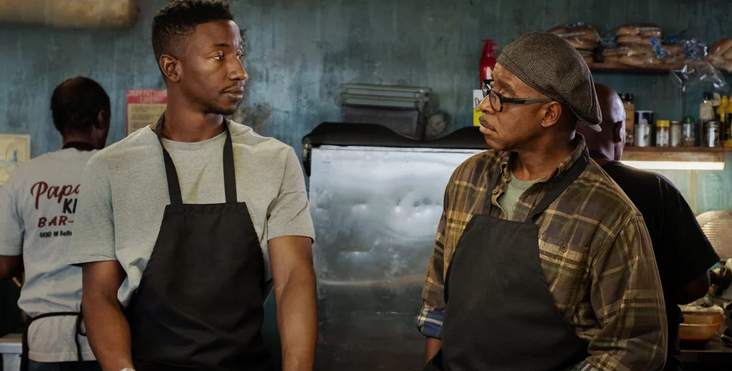 Pursuing their own dreams and destiny isn’t always as easy and illustrious as many young adults initially believe it will be, as they embark on establishing their careers. That’s certainly the case for actor Mamoudou Athie‘s protagonist, Elijah, in the upcoming drama, ‘Uncorked.’ The movie tells an equally hilarious and touching story about the main character and his father, whose hopes and expectations for the young man’s career drastically differ.

The film, which shows how the father and son have to finally learn to listen to one another and respect each other’s opinions, was written and directed by Prentice Penny. ‘Uncorked‘ is set to premiere on Netflix this Friday, March 27.

Fueled by his love for wine, ‘Uncorked’ follows Elijah as he enrolls in a course to become a master sommelier, an elite designation given only to a handful of people who are able to pass its notoriously difficult exam. It’s a dream that upends the expectations of his father, Louis (Courtney B. Vance), who insists Elijah take over the popular Memphis barbeque joint that’s been passed down from father to son since its inception. Elijah struggles with the demands of school and a new relationship, while Louis wrestles with the feelings of his son rejecting the family business, until a tragedy forces both of them to slow things down.

Athie took the time recently to talk about starring in ‘Uncorked’ during an exclusive interview. Among other things, the actor discussed how he enjoyed working with Penny as the drama’s writer-director, as the filmmaker not only infused some elements of his own life experiences into the story, but also encouraged the cast to bring their own knowledge to their roles. The performer also cherished the opportunity he had to build his character’s family dynamics on screen with his co-stars, especially Vance and Niecy Nash, who played Elijah ‘s mother, Sylvia .

ShockYa (SY): You play Elijah in the new movie, ‘Uncorked.’ What was it about the character, as well as the overall script, that convinced you to take on the role?

Mamoudou Athie (MA): Well, I got the part through the normal channels of getting an audition. I Skyped with the director, Prentice, about a month or two before I had my audition. We talked for awhile, and it was a wonderful conversation. It got me really interested in the movie.

Then the movie got pushed until later in the fall. I didn’t have the chance to audition, because I was doing something else, and I couldn’t audition earlier. But it worked out perfectly, because I was able to send in a tape. Then they thought that I was the guy for the job.

SY: While his father, Louis, hoping that his son takes over their family barbecue restaurant, Elijah hopes to instead become a master sommelier. What was the process of doing research into both fields?

MA: I learned so much about wine and barbecue. Prior to shooting the film, I had a very cursory knowledge of wine. But now I feel like I have a solid ground to discover more about it; wine is a never-ending story. It seemed so daunting in the beginning.

But as I got to learn more from the sommeliers who helped me prepare for the movie, they made the information more accessible to me than it was prior to becoming attached to the film. Now I can go to restaurants, and tell them what I want! Maybe not the exact wine, but I can tell them what I’m looking for in the notes, grapes and taste.

SY: You mentioned earlier working with with the film’s writer-director, Prentice Penny. What was your collaboration with him like on bringing your character of Elijah to the screen?

MA: The filmmaking experience, and working with Prentice, was lovely. I had a lot of my own ideas that he was engaged with. As we filmed the movie, we talked about those ideas, and the parallels between our lives, and where this character came from. So the character and story was a jumble of all of Prentice’s experiences, as well as my experiences, since I was the one who was portraying Elijah. We worked together to figure out what worked best for the story.

Prentice is a wonderful director; he loves actors, and talking about acting. We established a really great compatibility. Working with him was a really special experience.

SY: ‘Uncorked’ also stars Courtney B. Vance and Niecy Nash as Elijah ‘s parents. What was your experience collaborating with them, as well?

MA: I’ve been a fan of Courtney B. Vance for a long time, since before I was even working as an actor. I’ve admired his career for so long, so getting to work with him was a little intimidating. I thought, I hope he likes me! (laughs) I’ve been watching his career for over a decade, and now he was going to be playing my dad, which is a big deal. The first day on set, he was so fun and funny, and everyday after that, we had such a riot. The same was true with Niecy; she’s a lovely person. So it’s great to work with people you’ve really admired for so long.

SY: ‘Uncorked’ was shot on location in both Memphis and Paris. What was your experience of filming the drama in both cities?

MA: Memphis was awesome; there’s such history there, and the food is amazing. The people were really lovely, too; I loved working with the Memphis natives.

Our shoot in Paris was a lot shorter, but I had never been there before. So going there was a treat in itself. I’ve never seen a place with such history. We went to the Louvre, and got to shoot in the Musée d’Orsay, which is a once-in-a-lifetime experience. We had the whole impressionist wing to ourselves. So that was a treat. We also experimented with the wine in the restaurants there, which was great.

SY: The movie is set to be released on Netflix this Friday, March 27. What was your experience of working with the company? Why do you feel the distribution on the streaming service is beneficial for an independent film like this one?

MA: I’ve worked with Netflix a few times before (including on the 2019 fantasy comedy-drama, ‘Unicorn Store’); I love working with them. The good thing about working with a really big distributor like them is that they really trust the directors that they’re working with. They give great guidance, and support their filmmakers. It’s wonderful to have that kind of support.