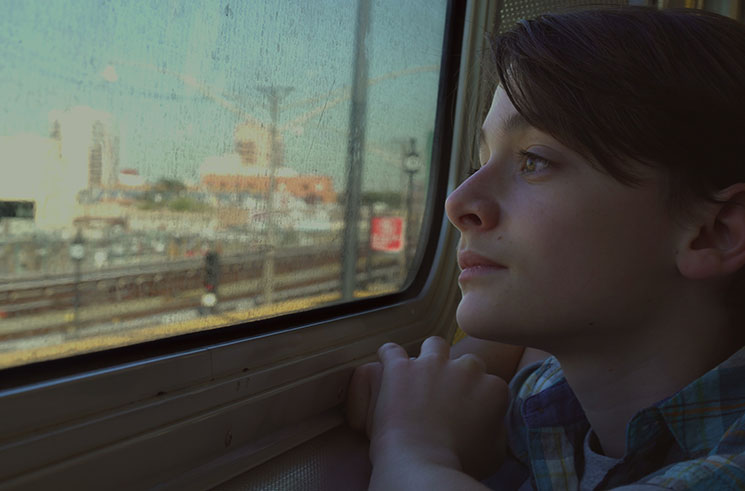 “Abe” opens like the CBS sitcom “Sheldon,” dealing with parents who wonder how to get their precocious nine-year-old to fit in, segues into an American version of Thomas Vinterberg’s Danish drama “Celebration” wherein dangerous hidden truths are revealed at a 60th birthday celebration, and concludes Hollywood style, the opposing sides meeting in the middle. The dramedy stars Noah Schnapp in the title role, in real life a 16-year-old inhabiting the enthusiastic soul and creative mind of a young man on the cusp of an upcoming Bar Mitzvah who has an identity crisis brought on my his feuding parents and grandparents. The movie is a delight, light and fluffy for the most part, a model of a story that like President Trump is all for motherhood and world peace, perhaps targeted to a Y/A (young adult) audience but which is in every way suitable for all ages, religions, and identities.

The story is unfolded by Fernando Grostein Andrade, a Brazilian filmmaker from São Paulo making himself quite at home shooting scenes in Brooklyn, which I would guess takes place at least in part in the fashionably youthful Dumbo neighborhood.

The film is all about fusion in food and in people, made all the more appropriate given the lush land and variety of cultures in Brazil, more specifically Bahia. Abe is the kind of person who though not fitting in with his own age group and who inevitably is (lightly) bullied and kidded by classmates, seems happy enough—though his parents and grandparents seem to take pleasure in raising the roof at the boy’s birthday party. The attention paid to him by his family is intrusive (as is some of the music in the soundtrack), not only because he is an only child but because two groups—Muslims and Jews who get together (though they shouldn’t)—are trying to influence the boy to follow their cultural traditions. We should mention as well that the kid’s dad Amir (Arian Moayed) is Muslim but identifies as atheist. In that last regard, Abe wonders at a outdoor fair whether it’s sinful to eat pork and is told by his dad, whose birth religion should eschew pig as much as that of kosher Jews, that restrictive customs like those forbidding certain foods are ridiculous. Amir is my kind of guy.

Instead of going to summer camp, Abe plays hooky, befriending Chico (Seu Jorge), a Brazilian chef, who at first shoos the kid away, then takes him on as an intern who must first wash the pots and haul out the trash, and then will be given pointers on cooking. Experimenting successfully for the most part with fusion cooking, melding popsicles with hemp seeds, he introduces and goes with the film’s great metaphor—that his parents and grandparents may be from different, even hostile religious traditions, but need to be fused, i.e. “saved,” by this young would-be messiah.

There is no way that we in the audience would believe that the arguments at the table between the Zionist side and the Palestinain proponents would be so basic and repetitive, so “Middle East 101,” given that these people must have been together for similar feasts for years. Perhaps that is part of why the movie may be targeted to young adults who spend their days and night texting banalities, leaving them no time for geopolitics. Anyway, the whole smorgasbord, or fused falafel and Manischewitz, works well. The few sentences spoken in Hebrew, Arabic and Portuguese are given nice, bright, yellow subtitles. It’s a small world after all.