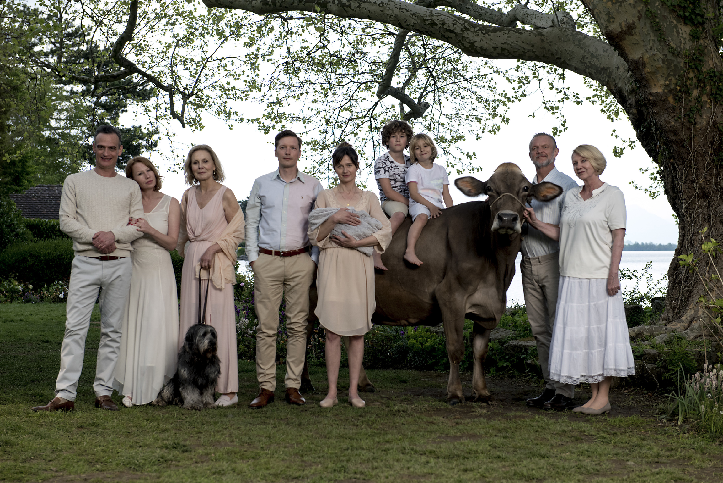 The cast from co-writer-director Bettina Oberli’s comedy-drama, ‘My Wonderful Wanda.’

Reflecting on universal societal conflicts in timely and gripping stories is a compelling narrative tool for filmmakers who wish to connect with audiences worldwide. Award-winning Swiss director, Bettina Oberli is doing just that, as she astutely explores class issues in her new comedy-drama, ‘My Wonderful Wanda.’ The helmer, who also co-wrote the script with Cooky Ziesche, effortlessly shows how money doesn’t buy happiness and is never simple when dealing with family and reputations in the powerful feature.

‘My Wonderful Wanda’ was previously scheduled to have its World Premiere last month during the International Narrative Competition at the Tribeca Film Festival in New York City. But in light of the current Coronavirus pandemic, festival officials ultimately decided to postpone the live event until further notice. While officials are hopeful they can reschedule the festival until later this year, when it’s safe for movie fans to watch films together again in theaters, the filmmakers for many features that were set to play last month, like Oberli and ‘My Wonderful Wanda,’ are looking for other ways to show their work.

‘My Wonderful Wanda’ follows the title character (Agnieszka Grochowska), a nurse who takes care of Josef (André Jung), the patriarch of the wealthy Wegmeister-Gloor family. In preparation for his 70th birthday, his wife, Elsa (Marthe Keller), asks Wanda to help out on some additional maid duties. Wanda negotiates for more money, which she sends back to her family in Poland, where her parents are taking care of her children, Jakob (Iwo Rajski) and Tomasz (Bruno Rajski).

Meawhile, the Wegmeister-Gloor’s son, Gregi (Jacob Matschenz), likes Wanda, which makes Josef jealous. Their daughter, Sofie (Birgit Minichmayr), doesn’t trust Wanda, however, and accuses her of stealing money from the family. When an unexpected complication arises, family secrets come to light, and arrangements are made to try and appease everyone.

Oberli generously took the time recently to talk about co-writing and directing ‘My Wonderful Wanda’ over the phone during an exclusive interview. Among other things, the filmmaker discussed how as the scribe-helmer, she wanted to show the emotional difficulties and challenges of Wanda’s career as a live-in nurse, but didn’t want to present the title character as just a victim of her circumstances. The filmmaker also mentioned that she was honored that the comedy-drama was chosen to play at this spring’s Tribeca Film Festival, and is hopeful for the recovery of international film festivals, as well as the movie industry as a whole, in the coming months.

ShockYa (SY): Along with Cooky Ziesche, you co-wrote the script for the new comedy-drama, ‘My Wonderful Wanda.’ What was the inspiration in penning the screenplay for the film? Why was it important to you to emphasize the current state of outpatient care market in the story?

Bettina Oberli: Well, I don’t know it is in the United States, but here in Europe, it’s more and more the case that the elderly don’t leave their homes. We engage people from the Eastern part of Europe to look after them at home. It’s something that’s happening more and more here. But I always thought it was weird that people would let their mom or dad be so close to a stranger. So I wanted to explore what could happen as a result of that relationship.

These women who do this work are badly paid, but they’re still receiving more money doing this work than if they stayed in their original country. But often times, it’s a good situation for them, because they earn more money than they ever would at home.

SY: In addition to co-writing the script, you also directed the movie. What was your overall helming style like on the set?

Oberli: Well, while you’re writing a movie, you also begin to think about how you’re going to direct it. Directing this movie was really nice, because when you work on a script for so long, it really gets into your system.

I spent a lot of time on the casting, and putting the family together. All of the performers are also stage actors, because the story is mostly told in one location, and we spent about two months in the same house together. So I thought it was important to work with actors from the theater, who are used to really rehearsing and developing the energy of the scenes with their partners. We had a lot of group scenes, so it was important to work with people who to like to work as a team.

Of course, it was exhausting, and we were always running out of time. But it was a great pleasure to shoot the movie this way. We all got along very well.

SY: ‘My Wonderful Wanda’ was shot almost entirely in one location, like you just mentioned. What was the experience of shooting the majority of the comedy-drama in one place?

Oberli: It was important to have a house near a lake, so that limited the possibilities of where we could film. We looked all over Switzerland for houses, but it wasn’t easy to find someone who would give you their house for months; with all of the set decorations we had to do, they had to leave their house for six months.

Since that wasn’t easy to do, we looked for about a year-and-a-half until we secured the one we used in the film. We couldn’t build a house in a studio, because we don’t have studios in Switzerland, so we had to shoot on location.

We finally found the house we ended up using, which was perfect, and we were able to shoot the whole movie there. We then had to develop a visual language that keeps the whole movie interesting. When you only have one location, it has to be interesting enough to be present in for 100 minutes.

SY: Speaking of keeping the film visually interesting, you shot ‘My Wonderful Wanda’ chronologically with Director of Photography, Judith Kaufmann. What was your experience of collaborating with her to shoot the movie?

Oberli: Judith makes beautiful, interesting choices. She’s always thinking about the story, and also has a very good eye for acting. She’s never looking for a spectacular effect that’s emotionally empty. Instead, she’s always thinking and working with the director and writer about how we can tell the story in the most elegant way.

SY: The comedy-drama was scheduled to have its World Premeire at this year’s Tribeca Film Festival. With the cancellation of the festival, due to the current global Coronavirus pandemic, what are your upcoming plans on how you’ll release ‘My Wonderful Wanda?’

Oberli: Well, right now, we don’t know. We had other festival invitations, but of course, Tribeca was the first one. The other festivals were in Europe, which were also postponed. After those festivals, we were hoping to officially release the movie in theaters in the fall n Europe.

But that plan has also been postponed, because we don’t know when cinemas will reopen. There will be different releases in different countries, but no one can say for sure when that will be, so we need a lot of patience. We hope that this whole situation doesn’t destroy the whole industry, so this is a delicate situation.