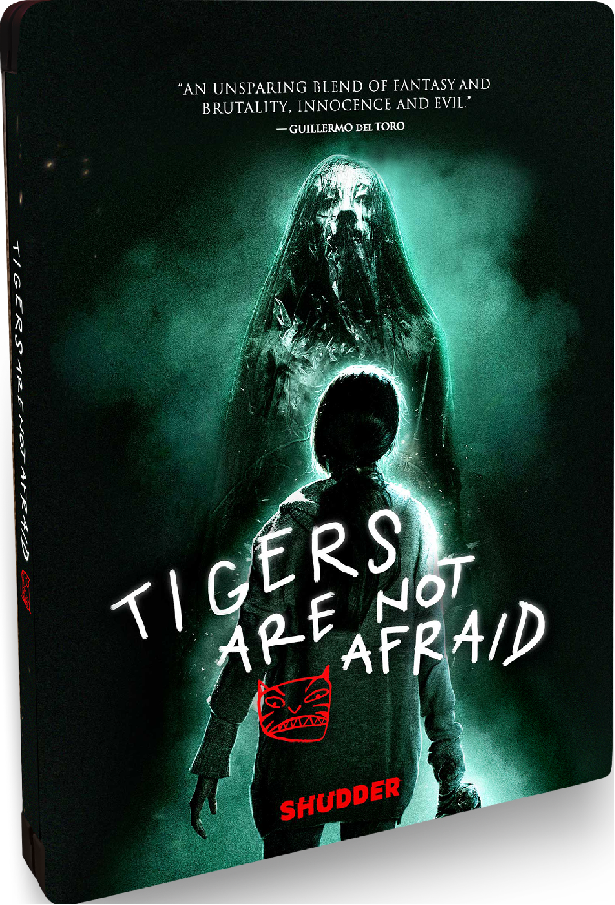 The Blu-ray and DVD cover for writer-director-executive producer Issa López’s horror-mystery-fantasy film, ‘Tigers Are Not Afraid.’

Crafting an innocent fantasy to help battle brutality is one of the best ways humanity can overcome evil, especially for virtuous children who have yet deliberately sinned. That’s certainly the case for the main characters in the haunting horror fairytale, ‘Tigers Are Not Afraid.’ The drama, which is in Spanish with English subtitles, transcends the differences that divide different cultures around the world to unite people through a more positive and magical journey.

‘Tigers Are Not Afraid’ is now available as a Steelbook Blu-ray/DVD combo pack, as well as on DVD. The disc release comes after the movie had a limited theatrical release last summer, which was followed by an exclusive distribution on Shudder in the fall. The theatrical and streaming releases followed the drama’s run on the film festival circuit, including Fantastic Fest in 2017, where López was named Best Director. The feature also won two Ariel Awards, which are the Mexican equivalent of the Oscars.

Set against the backdrop of Mexico’s devastating drug wars, ‘Tigers Are Not Afraid’ follows a group of orphaned children who are unexpectedly given three magical wishes. As they run from the cartel that murdered their parents and the ghosts that haunt them, they must decide how to use this special gift to save their own lives and the people they love.

López generously took the time recently to talk about writing and directing ‘Tigers Are Not Afraid’ during an exclusive interview over the phone. Among other things, the filmmaker discussed how she was inspired to pen the script for the thriller by her personal life; she realized that in order to tell the type of story she wanted to, she had to scribe the story on her own. The helmer also mentioned that since the child actors in the movie would often have to go to dark, emotional places during the shoot, it was her responsibility to bring them back to normalcy at the end of each scene.

The conversation began with the writer explaining why she was inspired to pen the script for ‘Tigers Are Not Afraid,’ and what her experience was like scribing the screenplay. “It came from a very dark place in my personal life. I had made a huge effort to make my first English-language movie, and had been pursuing that for seven years. That process, along with the fact that I hadn’t directed a movie in general in a long time, was taking a huge, massive toll on my soul,” she admitted. “I was developing projects that belonged to the people I was developing them with. So when they weren’t made, I was stuck.

“So I realized that the only way to get back into making films, as well as the set, which was my life, was to create a script for no one but myself,” López shared. “I had to make the time to write my own script, so I would wake up an hour earlier every morning. That was against my nature, because I would have to wake up in the dark. But I would reach for my computer and write one scene every morning, whether it was a half-page scene or an eight-page scene. I wouldn’t allow myself to get out of bed until it was done. I would then close my computer, and go on with the rest of my day.

“The writing process was about creating a story that was important to me, and became quite personal. That’s why it became a strange animal that moves between genres,” the scribe added.

López then delved into the process of how in addition to writing the screenplay, she also directed the drama, and how working on the script influenced her helming style. “It was an interesting process, because it was the first time that I worked with children, who were at the center of the narration. It took a specific set of tools to work with child actors, which I never even imagined I needed. So that was a challenge.”

The director then discussed the process of working with the visual effects on the film. “Creating those effects meant I had to fake it until I made it. We had to find a way to create them, so we did our best. The truth is, often times, your best work happens when you’re going into the unknown,” she revealed. López added that “Before I wrote and directed ‘Tigers Are Not Afraid,’ I had only made comedies, but I had always wanted to make a horror movie. Doing so was a huge learning process, but I loved it. I think it came together perfectly.”

Further speaking of the child actors who appear in the thriller, the filmmaker then shared what the process of casting them, and working with them on building their characters’ arcs, was like. “That was a huge adventure for me. My first concern for this project, even when I was writing it, was how we were going to find the right actors. What I wanted to get from them was a hyper-real performance. I wanted the movie to feel like a war documentary, so the supernatural element was incredibly surprising. But at the same time, it was very much rooted in reality. In order to achieve that, I needed very ultra-natural performances,” she noted. “Children aren’t always inclined to give natural performances, so finding the right actors was challenging.

“During the casting process, we did a call-back for the children who we were considering casting in the movie. We wanted to see if they could give very real and natural performances,” López divulged.

“The thing I definitely wasn’t expecting was the fact that there was a challenge of extracting the performances. We had to get them to a dark, emotional place, as there was violence in some parts of the story, and supernatural elements in other parts,” the helmer noted.

“It was also my responsibility to bring them back to normalcy at the end of each scene, because we didn’t want to scar these children for the rest of their lives. You don’t want to be the one that leads them through a horrible experience,” López also emphasized. “I’m a firm believer that if you have a happy set that’s filled with joy, the scenes are going to be more vibrant.

“I’m not a mother, as it was never part of my plans to have children of my own. But having this intense relationship with these kids, even for just a brief period, was beautiful,” the filmmaker added.

López then delved into how ‘Tigers Are Not Afraid’ was shot on location in Mexico City. The movie had a limited shooting schedule and budget, so “we didn’t have the money to create the sets. So we had to find real places that already looked and felt like what I had in mind. So time was always the answer, since we didn’t have the money.

“So we took a longer time to pre-produce the movie…During that time, we did the location scouting throughout all of Mexico City. We never mentioned what city the story takes place in during the movie, so it can be any Mexican city. But Mexico City is massive, so you can pretty much find anything there,” the director further shared.

“But you have to be flexible about the locations. For example, there was a scene in the original script that was set in an abandoned doll factory, but we couldn’t find one in Mexico City. So I had to be open to finding another location. When I found the right atmosphere, I knew I could still tell that part of the story in a different environment, and I did,” López concluded.