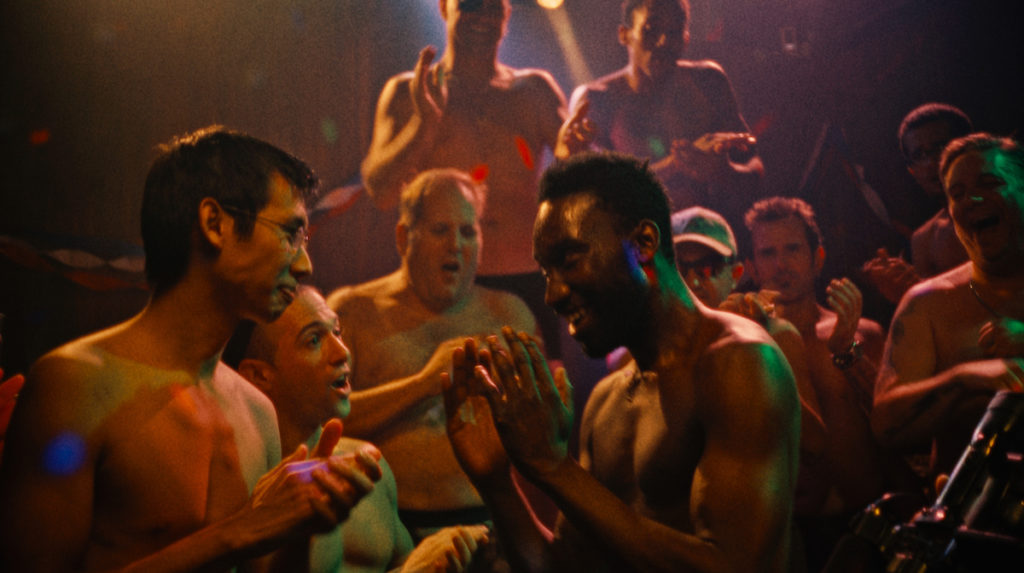 “Mope” is Lucas Heyne’s freshman direction of a full-length narrative, his previous short, “Tohm Lev: Legalize Nudity, a four-minute pro-animal-rights look at the selling of furs and other skins of animals. Now he jumps into a field that people generally do not like to admit they partake of, highlighting the sleazy people who turn hard-core sex into profit. It’s also about friendship, about two people who are virtually joined at the hip with an undying kinship, best pals who are likely to cause heartbreak if one cuts the cord. But Tom Dong (Kelly Sry), a Chinese-American, has a talent for designing websites which should have proved profitable enough, yet his real ambition is to be a porn star. His best friend, Steve Driver (Nathan Stewart-Jarrett), is less talented but even more obsessed with being so famous that his face would be on the cover of DVDs. He is held back not only by a lack of acting talent but, as one member of the porn studio staff says, he is not “endowed” sufficiently. Even worse, he is borderline psychotic, failing to succeed in college and convicted of a crime for which he served house arrest. He does have one other interest, one in which he excels, so it’s hard to see why he had not been encouraged to use a 16th century sword and act in Japanese films about a time gone by.

The two pair up, try out in front of director Eric (Brian Huskey) who at first wants to dismiss them but allows them to remain because Tom can fix up the studio website. As their performances deepen (so to speak) with the cheap gals who do everything from one’s enjoying a gang cum that sprays all over her face to accepting sexual congress with any and all actors, with one exception. Both the girls and the director do not appreciate Steve’s smell, urge him regularly to take a shower, and become increasingly aggressive trying to get him to leave the studio while keeping Tom on the payroll. When Tom finally agrees to leave his best friend to his fate after sticking up for him in front to the director (Huskey has the most amusing role throughout), Steve’s borderline psychosis goes over the border.

This is based on a true story, a dark comedy indeed, one with an ending that earns its melodramatic finale. Performances are fine: you probably could not believe that Tom would even leave Steve to continue with the studio, but credibly enough he is ready to split to further his own ambition. A meeting of Steve in a restaurant with his father (Clayton Rohner) and stepmother (Peggy Dunne) as Steve is pitching for his dad’s investment is both comical and heartbreaking. Ultimately “Mope” opens up to what resembles a look at the sleaze of the industry but concludes with both terror and anguish. All is set forth with crackerjack performances from not only the Stewart-Jarrett and Sry but some over-the-top acting from David Arquette as director with a successful porn enterprise.