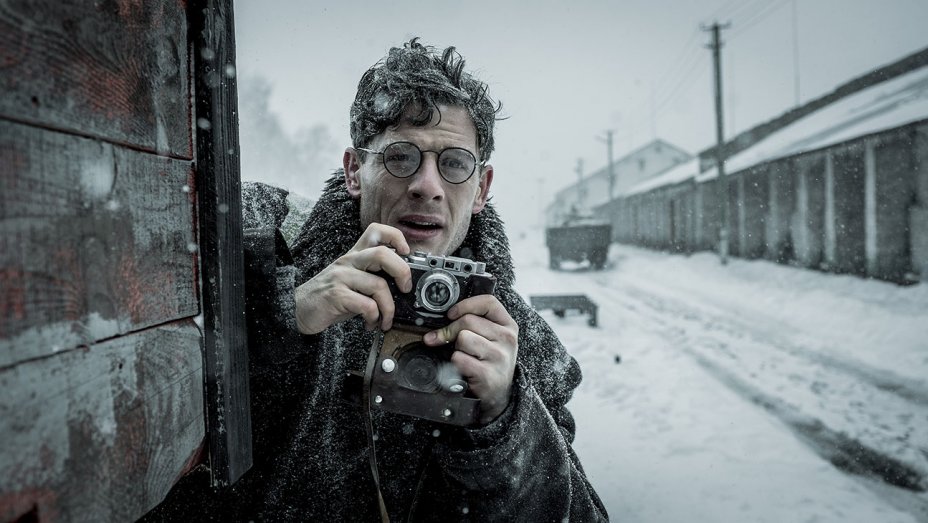 “Mr. Jones” should be required viewing in every school of journalism from Columbia University down to the smallest community college in Nebraska. The true events on which “Mr. Jones” is based focus in part on the newspaper industry which was far more important in its time when everybody read the papers daily, a practice now largely abandoned by people absorbed more in their I-Phones than on reading about something greater than themselves. An intelligent viewer of this picture could not be faulted for noting the current relevance on display, when fake stores from Russia corrupt social media and when every paper whose editorial board leans left and Democratic is considered by the White House to be “failing.”

Warsaw-born Agnieszka Holland, whose “Europa Europa” unfolds a story of a Jewish boy hiding his religion by joining Hitler Youth, is a director who obviously thinks well beyond the rom-com and hyped-up melodrama, is well suited for the task, promoting the central motif that journalists must tell the truth as they see it. There is only one truth, and journalists who for material gain or sensationalist hype do anything to cover up the truth, they are guilty of hypocrisy and an outright betrayal of their (once) revered profession.

Mr. Jones (James Norton) pursues a fascinating story so perilous, so important to tell, that he appears willingly to risk his comfort and even his life. The tale tells of the Soviet Union’s starvation of at least five million peasants in Soviet dominated Ukraine, their farms collectivized and much of their produce shipped out of the country to Moscow. That view is considered controversial, even untrue, particularly by Walter Duranty (Peter Sarsgaard), a reporter for the NY Times who made his mark after being accorded a private interview with Stalin. From that time he became the mouthpiece of the communist nation, and awarded a Pulitzer for his reporting of what became known as fake news. If Duranty’s sucking up to Russia no matter his personal feelings makes you think of what’s happening on Capitol Hill, you know enough about politics to join the audience of Saturday Night Live.

When Gareth Jones first appears in this shattering narrative film, he’s a kid, yet Britain’s Prime Minister David Lloyd George (Kenneth Cranham) employs him as an adviser—a gig that ends when he is laughed out of a Cabinet meeting for suggesting that the UK would soon go to war against the Soviet Union. Out of the mouth of babes. He is given a reference by the prime minister upon which Jones commits forgery by erasing the sentence about his “former” service to the prime minister, changing that to “valued” service. He receives a journalist’s visa to the Soviet Union where he is expected to write about a Potemkin Village setup, refused admittance to the Ukraine where he smuggles himself in and sees first-hand the starvation and despair of farmers either driven from the land or forced to work in collectives.

Traveling by train as though a first-class tourist, he moves into the third-class compartment finding people without a crust of bread. Walking through the frozen depths of Ukraine farmland after trading a bit of food for a passenger’s overcoat, he finds vast reaches peopled by peasants without hope. (Not mentioned in the movie is that fact that the rich peasants were sent to the gulag or killed, while the masses who work the land have little motivation to produce anything save for their own private needs.)

One comes away from the picture assuming that Ms. Holland’s politics are as Orwellian as George Orwell himself, the latter played by Joseph Mawle. Mawle opens the movie by advising that he will discuss the failures of communism simply, in a book peopled by farm animals substituting for the various personages in a communist state.

Given the poignant scenes of starvation and frozen land with a particularly vivid coverage of a heroin-soaked party attended by a naked, drunk Pulitzer-prize winning journalist, “Mr. Jones” can he heartily recommended not only to the aforementioned journalism students but also to students on the secondary school level who have probably read “Animal Farm” and would be further enlightened by observing Soviet criminality on the screen.

Cancel reply
Kaniehtiio Horn Shocks Her Parents with News of Her Surprise Wedding in Tell Me I Love You Exclusive Clip
Creating a Character: The Moni Yakim Legacy Movie Review
To Top