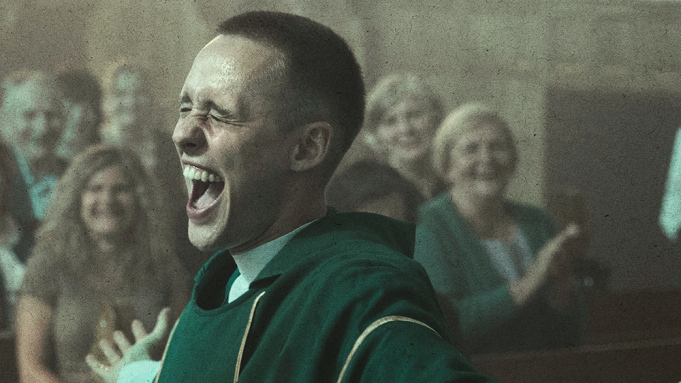 You may leave this film, a rigorous drama embellished with Catholic ritual, with a puzzling thought. When
Daniel (Bartosz Bielenia) is about to leave juvenile detention in a small Polish community, he tells the institution’s priest, Father Tomasz (Lukasz Simlatl), that he wants to work in a seminary. Daniel might be considered teacher’s pet by his youthful fellow convicts who spend their time training to work in a sawmill. He is the one called upon by the priest to add to the devotionals, sings the 23rd Psalm without a trace of self-consciousness or embarrassment, and thinks rightly that he could minister to a small town congregation. But Tomasz cautions that with his record, no seminary would take him on. What’s puzzling is: why is it so difficult for an ex-convict, anywhere, any country, to be trusted with a responsible job, even one that is not known for having cash around?

Daniel eschews working in a sawmill and takes a bus to a distant community where he becomes a fake priest. He convinces the vicar (Zdzislaw Wardejn) that he has been recently ordained in Warsaw, whips out a clerical collar with which he absconded, and is asked by the vicar to take his place for a while as he goes off to take care of health problems.

The dark, intense, absorbing and surprisingly credible tale of revenge and redemption is directed by Jan Komasa, whose “Warsaw 44” is a tale of the uprising against the Nazis, with a story line that features love, friendly and adventure. “Corpus Christi” is a more intimate story which benefits greatly from Bielenia’s stunning performance as twenty-year-old who may be faking his credentials but is the real thing otherwise; a fellow whose ministrations to his small-town flock leads to record numbers at services including absolute trust in him as parishioners go to confession.

Aside from the principal action in which we in the audience may suspect that a reckoning, there is a secondary plot. A middle-aged man had crashed his car into a vehicle holding six youths, killing all. The vicar, with the support of the community including the sacristy caretaker Lidia (Aleksandra Konieczna), refuses to bury the man. Daniel goes against the opinion of everyone except the widow (Barbara Kurzaj) of the “murderer” and the caretaker’s daughter, Marta (Elilza Rycembel), who is sexually attracted to the priest. He bucks even the town mayor and leading employer (Leszek Lichota) who wants the planned burial to just go away, Daniel must face a crossroads when inevitably, people back at “juvie” discover the fraud.

If this were a documentary or a “Christian” feature, the moral would be: give former convicts a chance a redemption. As a drama, the same noble message would come across, but more importantly, “Corpus Christi,” with its powerful performance by a 28-year-old with a passionate gaze, will serve as a dramatized sermon that few actual religious leaders can regularly match.

The movie is in Polish with English subtitles and benefits hugely by the absence of music in the soundtrack. “Corpus Christi” was the Polish entry for the 2020 Academy Awards for International Feature.

Cancel reply
Tom Cruise Must Protect His Children in War of the Worlds BBC One Broadcast
Interview: David Koepp Talks You Should Have Left
To Top