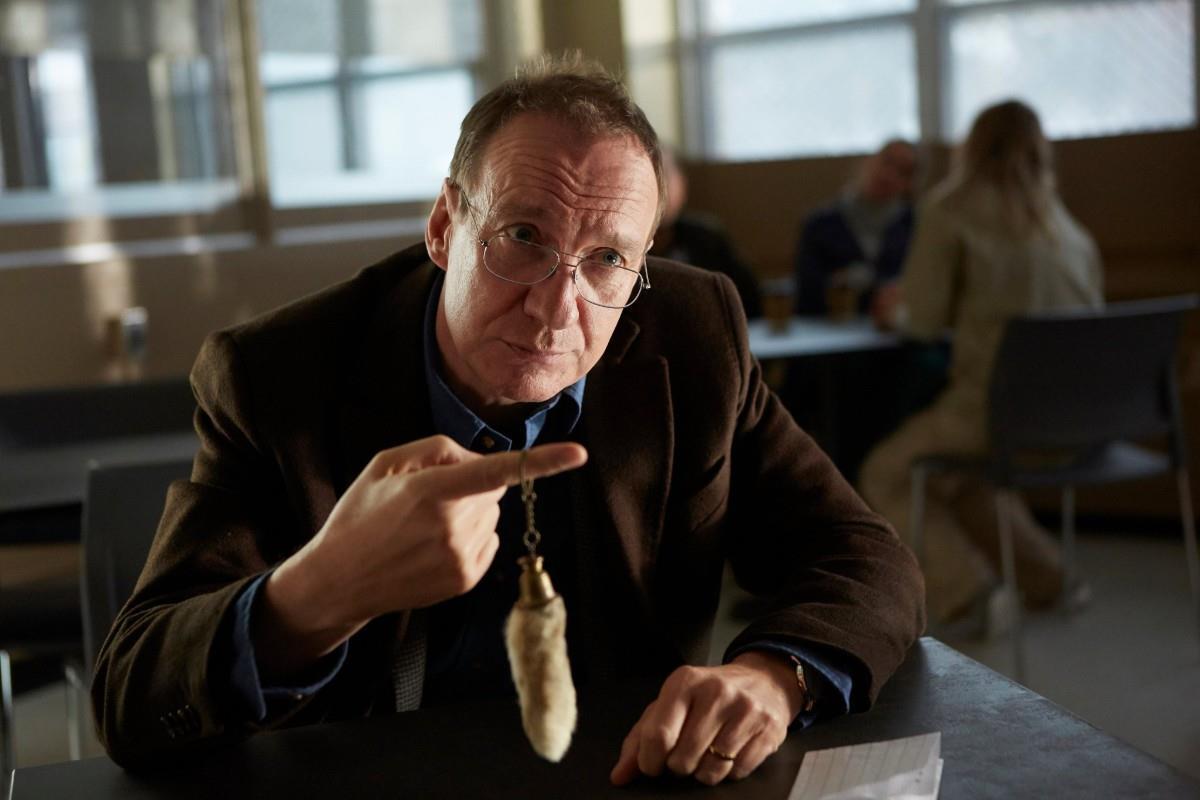 A sleazy bus driver is obsessed with a beautiful young woman. A depressed and confused father cannot understand why her daughter, in jail for a crime she did not commit, resists all chances for release. While Atom Egoyan, whose “The Sweet Hereafter,” about complications following a tragic accident involving schoolchildren may be his best film, he now presides over a relationship that brings out the character of both Jim (David Thewlis), the dad, and his adult daughter Veronica (Laysla De Oliveira). To the movie’s credit, the performance by David Thewlis,the emotional center of the film, is superb, and Egoyan is able to evoke an accomplished job from De Oliveira. However the zigs and zags of time are so frequent and distracting that we wonder why he could not have played the story straight.

The story is framed by a conference between Veronica (Laysla De Oliveira) and Father Greg (Luke Wilson), a priest. After her father dies, Veronica wants to give the minister clues to her dad’s life for the eulogy, though the details she reveals may be simply too truthful for the testimonial. She describes Jim’s profession, that of a food inspector in Ontario with the power to close down small businesses. She seems cheered when remembering how much care and attention he paid to her pet rabbit Benjamin when she was away from home conducting concerts with the school orchestra. But she has no problem raising one issue that caused her trauma. When her mother was ill with cancer, she saw Jim holding hands with another woman, an observation Jim defensively tries to refute.

After driving the teacher and the kids to a concert, Mike (Rossif Sutherland), the driver, gets into Veronica’s cell phone and texts a message pretending it is from one of the youngsters. When Veronica realizes that the driver is the guilty party, she stages a prank in which she pretends to have sex with two of her underage boys in order to drive Mike crazy. She feels so guilty for her own actions that she goes willingly to jail for statutory rape and refuses a chance to be released. Melodramatic as this venture can be, Jim’s search for redemption is the real heart of the film. He is a failed restaurateur turned Ontario food health inspector, willing to close down restaurants with a single inspection almost as if he is getting revenge on those successfully plying the food trade. He finds a rat in one place, sniffs at the temperature of the meat, and in one dastardly deed he plants rabbit poop in the men’s room of one restaurant for reasons that become clear. The highlight occurs when he threatens to close down an Armenian place for processing meat on the premises, a violation of code. When days later when a large, boisterous party enjoys the rabbit meat, honoring him for keeping the place open,even making him the guest of honor. The sad, hesitant speech he delivers to the bemusement of the crowd sums up buried feelings.

In several scenes, Thewlis wears a green shirt with green slacks and jacket amid a background of sickly green, the colors becoming warner as the story continues. While granting that the convoluted plot, a characteristic of Egoyan’s general directing, may keep the audience on edge, withholding information to tease an audience into wondering about a payoff, in this case the technique goes so far that the plot is too muddied.