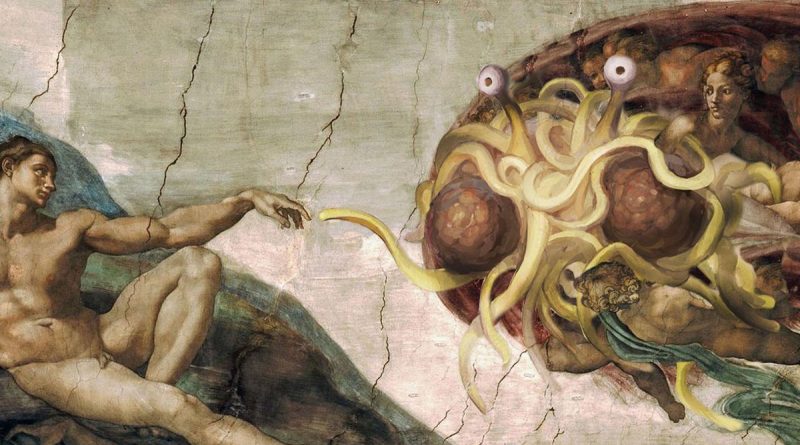 What makes a book sacred? Is there anything intrinsically sacred about the Koran, the Bhagavad Gita, the Old Testament, the New Testament? For example, if members of the Guajajara indigenous tribe in Marantao state in Eastern Brazil saw a copy of one of these books, studied it, put a spear into it, would they find anything holy? Not likely. Is “The Art of the Deal” sacred? It is, if at least one American says it is, and you’ll probably find one patriot claiming that it is so. Books and the religious orders they teach are sacred only because people say they are. If you realize that much, you can go into a screening of “I, Pastafari” with an open mind.

When you inspect the title of this movie, which would be better called simply “Pastafari,” you will guess that it has something to do with spaghetti and its cousins like ziti, macaroni, and linguini. Are the Pastafarians a joke? Yes and no. Though the documentary does not support the premise that the Pastafarians are just some jokers on spring break, we discover that they take themselves seriously when they insist that theirs is a religion like Christianity, Judaism, Zoroastrianism, Mormonism and the like. In fact they make frequent journeys to courtrooms in their home countries, particularly in the Netherlands, Germany and Austria, to prove that they meet the criteria of real religions, because they’re serious. Worshippers of the flying spaghetti monster, the deity that should be put into capital letters as with other faiths The Flying Spaghetti Monster, love their logo featuring two eyes atop a mound of pasta with two meatballs. They even show off a painting of mankind reaching out, naked to the right, to receive the gift of life from a bowl of noodles.

Still, this is no “Animal House,” but features instead a multi-national group of some young people and some with long white beards who wear colanders on their head. They refuse to remove their respectful metal attire when told that they could not get drivers’ licenses unless they wear the headgear for religious reasons, so they pounce on that loophole and win the right, at least in the ultra-liberal Netherlands, to take their pictures, so long as their faces are clearly shown.

In archival films, we see the Pastafarians with somber faces defending their right to be considered a religion just like the older ones that have established themselves, winning a few court decisions, losing most. Those of us viewing the picture get the point that they are really atheists who piggyback the idea posited by proponents of the theory of intelligent design, that if you cannot prove that it’s wrong, it should be upheld as a legitimate point of view. Some archival shots of the so-called Monkey Trial involving Scopes, a high school teacher who lets himself be arrested when he taught the Theory of Evolution and whose lawyer, Clarence Darrow, trashed the state’s attorney William Jennings Bryan in an eight-hour interrogation (which was the subject of the enormously entertaining play “Inherit the Wind”).

Yes, Virginia, there really are Pastafarians in the world, who, instead of lecturing people, use the arguments of religious people to show the arbitrary nature of a faith in supernatural beings. In fact Franklin Foer did an article in the Atlantic magazine of November 2016 about Flying Spaghetti Monster acolytes across the Continent who are a genuine organized movement “founded in large part to critique organized religion…[with] the trapping and some of the social functions of a real religion.” He notes that their Sabbath is on a “Friday, because our god was faster than the other gods, and he finished with the creation of the Earth earlier.” New Zealand became the first country to legally recognize marriages.

Leave it to the U.S., a generally more religious country than much of Europe, to deny a Nebraska prisoner’s request to practice the Pastafarian faith, ruling FSM a parody and not a religion. The Netherlands went the other way granting the group official status. “If you are not satisfied,” notes 24-year-old Bobby Henderson, “Your old religion will likely take you back.”

“I, Pastafari” is a broadly humorous movie with a consequential metaphysical philosophy, marred only by an insistence on intrusive music in the soundtrack, as though director Michael Arthur in his freshman offering does not trust the theater audience to know when the Pastafarians are messing with our mind. And hey, it’s only 56 minutes long, so what can you lose (except your faith)? R’amen.