Song Without A Name Movie Review 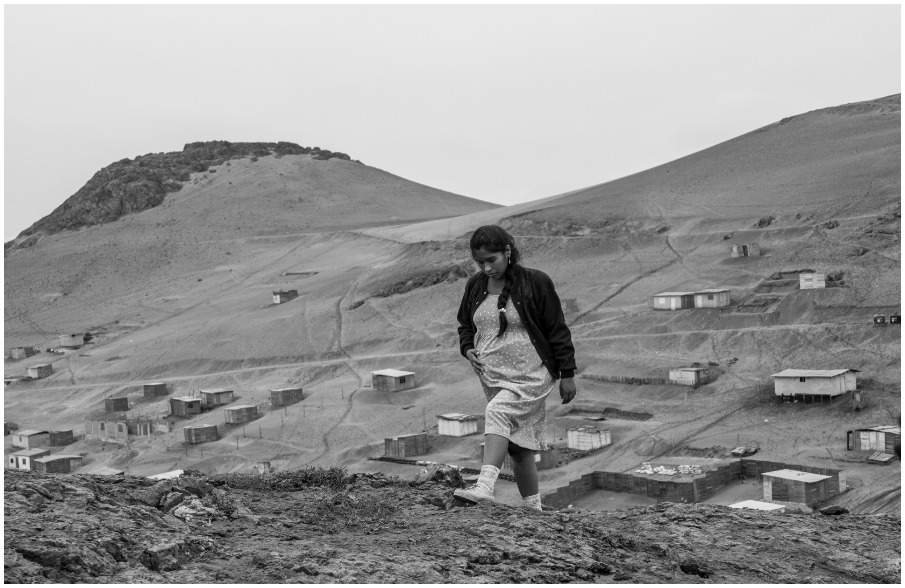 From the looks of the Peruvian scenes in “Song without a Name,” you can bet that if President Trump saw this movie (if indeed he saw anything more recent than “Gone with the Wind”), he would compare the place with an adjective that he would never give to Norway. Melina León, who directs and co-wrote the tale in her freshman entry into full arthouse fare, focuses most of her attention on three people. One is the desperately poor Georgina (Pamela Mendosa), her partner Leo (Lucio Rojas), and an enterprising journalist from Lima, Pedro Campos (Tommy Parraga). They are living in a time that Peru is under constant terrorist attacks during the 1980s from Shining Path or Sendero Luminoso.

The plot kicks in when Georgina, who lives in a remote wooden shack a long bus ride and walk outside of the capital, is shown in her ninth month of pregnancy, perhaps wondering how she will ever raise enough money to find an obstetrician let alone to support her first baby. She is vulnerable enough to be taken in by a radio ad announcing that a clinic is Lima would give her free medical assistance if she chose to give birth there, and without the wherewithal to check out the place—which doesn’t resemble anything I’ve seen in Planned Parenthood clinics—she reports to the place thinking that she lucked out. Women speak gently to her, they help her up from the patient table, and tell her that her child is a girl. The mood changes ominously when she asks to see her daughter but is told to come back tomorrow, which sends Georgina into a screaming fit. She pounds on the doors of the “clinic” the next day only to find out that the place is closed, the staff having moved out swiftly.

The plot is adapted from actual happenings when Peru was scandalized by the thefts of babies to be sold abroad. It’s not clear whether the Shining Path guerrillas were involved in the theft or whether high officials in the government were part of the scheme. With inflation hitting 400%, Peru in 1988 when the film takes place was not unlike Venezuela and not the kind of country that care much about indigenous women like Georgina who follow a bureaucratic maze trying to get government officials even to listen to her.

If this were a Hollywood movie, the differences would be monumental. Assault rifles would make entrances every ten minutes, the photography would be in brilliant color particularly when covering village festivals (remember the opening scene in “Spectre” exhibiting the colorful “Día de los muertos” parade?), and the editing would be racing. Crime would not pay. Instead director León pays great respect to the freshman script co-written by Michael J. White, prioritizing atmosphere over action and dialogue. With a boxy aspect ratio of 4:3 and black-and-white photography, “Song” is replete with long takes with a variety of close-ups, especially during the meetings of the brave reporter with a gay, Havana-born boyfriend, though there is little psychological depth given to any of the characters.

The movie might be compared to “Roma,” Alfonso Cuarón’s awards-winning look at the life of a maid in a rich Mexican household, but aside from the black-and-white photography and the theme of social inequities, “Song without a Name” has no great use for that picture’s flash and images of the upper-middle-class family.

Press notes mention that this film is based partly on the exposé in 1981 of a trafficking ring that smuggled babies for sale to Europeans and Americans, and in fact one senator consulted by the journalist hints that the government was involved. “What can that woman offer to her baby?” yields the politician, the obvious intent being that the newborns will be far better-off in the developed world. The title song is recited by a newly relaxed Georgina when she ultimately realizes that she will never again see her baby. And it’s not only right-wingers in America who would agree with the senator, wondering what in heaven’s name a twenty-year-old woman living in a wooden shack out in nowhere trying to eke out a living selling potatoes and onions in Lima is doing giving birth.

The bold white subtitles translate the story’s Spanish and Quechua into English.Hardly a brash, political doc on the level of “The American President” and “All the President’s Men,” this film is more a poetic tone poem, a Liszt “Les Préludes” compared to Tchaikovsky’s “1812 Overture,” and should be enjoyed by an intelligent, patient audience.