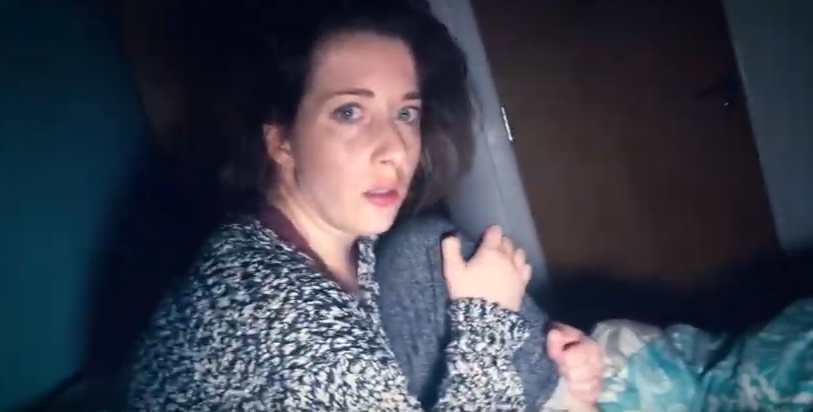 Up-and-coming social media stars often share the most intimate personal details about their lives, in order to gain as many followers as possible. But the characters played by filmmaker-actor, Graham Hughes and his co-star, Annabel Logan, in the upcoming horror movie, ‘Death of a Vlogger,’ begin to question their rise in fame when they begin capturing unexplained paranormal events in their home.

The mockumentary was written, directed, produced and edited by Hughes. In addition to the filmmaker and Logan, ‘Death of a Vlogger’ also stars Paddy Kondracki. The feature is set to be distributed tomorrow on VOD by Gravitas Ventures.

In honor of the mystery drama’s release, ShockYa is premiering an exclusive clip from the film. In the clip, Logan’s character, Erin, frantically wakes Hughes’ protagonist, Graham, as she states that she saw something, and thinks there’s someone walking around throughout their flat. So he begins to film Erin’s frightened demeanor on his phone, during which time he records someone walking past their bedroom over her shoulder. (The clip features some language that may not be suitable for children.)

Gravitas Ventures has unveiled the following synopsis for ‘Death of a Vlogger’:

Combining found footage, archive materials, talking head interviews and ripped YouTube videos, ‘Death of a Vlogger’ is a horror mockumentary that explores the dark side of the internet. When Graham, a YouTube vlogger, finds that his comedy sketches aren’t pulling in the followers, he decides to up his game. Suddenly, he rises to fame when he captures a paranormal incident live for his viewers to see. Graham is determined to continue documenting his haunting, and along the way, brings with him a legion of fans, who are willing to believe anything he shows them. But with people trying to debunk his videos, Graham starts getting nervous about the prospect of something worse than any ghost…an internet shaming.