Children can become the hero this Halloween season, as they help Johnny the Skull stop spooky ghosts from stealing his latest treasure at Pirates Cove! With this year’s eeriest holiday in danger of not surviving COVID-19, especially with door-to-door trick or treating not being allowed in many neighborhoods, kids can still have tons of fun with their whole family with Goliath‘s latest game, ‘Johnny the Skull: Pirates Cove.’

ShockYa is happily one of the first outlets to cover the release of the ghost-catching, treasure-seeking pirate Halloween game. To our ominous joy, we just received a review sample of ‘Johnny the Skull: Pirates Cove,’ courtesy of Goliath Games.

The family-owned and run toy and game business is truly embracing the creepy spirit of the title character, and wants to help children everywhere celebrate Halloween with the fall’s most exciting new game. ‘Johnny the Skull: Pirates Cove’ is sure to entertain young pirates of all ages, as the game projects ghosts on the walls and ceiling of their homes. Players will strengthen their hand-eye coordination by using their electronic Pirate Blaster to zap the ghosts. The fun of the game is for the players to not only spot their scary adversaries quickly, but also zap them right away, or they’ll miss taking them down.

‘Johnny the Skull: Pirates Cove’ is meant for one or two players, ages 4 and up. (Warning: the game features small parts, and may pose a choking hazard for babies, so it’s not recommended for children who are under three-years-old.) One of the best aspects of the game is that it features four different skill levels, so pirates of all ages can have fun, and feel good about themselves, as they defeat the chilling ghosts.

Goliath is now selling its latest innovative, ghoulish game for an MSRP of $24.99 at Target and its official website. In honor of ‘Johnny the Skull: Pirates Cove’s recent release, ShockYa is offering four lucky winners a copy of the game. To enter, email us at ShockyaGiveaway@aol.com. Let us know that you’re entering to win the ‘Johnny the Skull: Pirates Cove’ game giveaway in the email’s subject line, and include your mailing address in the message. You have until this Friday, October 16 to enter, and you can enter the contest once daily. On October 16, we’ll pick the winners at random, and notify them through email. Good luck!

‘Johnny the Skull: Pirates Cove’ is the latest, and one of the overall best, Halloween games that screams fun for the whole family, as children will surely love taking down the rambunctious ghosts, in order to save the treasure. The visually stunning electronic game will not only help families learn to love working together to destroy the projected ghost images that are all around them, but also aid children who play by themselves gain confidence in succeeding at completing an exciting arcade-like game on their own. 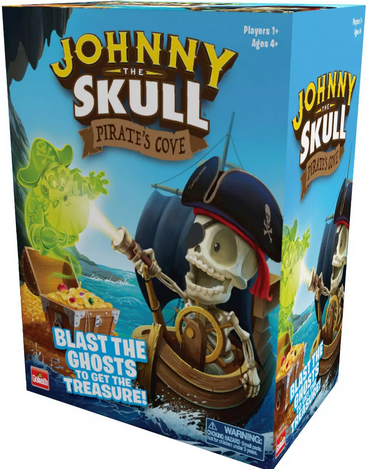