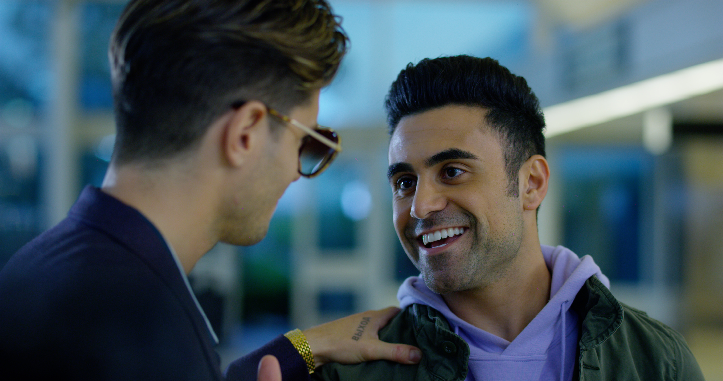 George Janko is learning the hard way that social media is changing not only him as an individual, but society as a whole. In his new horror film, ‘No Escape,’ the up-and-coming actor is just starting to comprehend that as social media expectations of living a perfect life are constantly being pushed to the extreme, people are willing to do whatever it takes to satisfy their audience, even if they have to be dishonest with the people in their lives.

The performer’s character is just one of the core cast of protagonists in the drama who are realizing too late that constantly adjusting their behavior to satisfy the needs and entertainment of those around them, including their audience, will not only drastically hurt their relationships, but their overall lives. The story interweaves the forces of social media and fame within the evolving landscape of experiential entertainment, and challenges the viewer to consider how they interact with their digital world.

Janko, who has mainly guest-starred on various television shows since he began acting in 2015, made his debut as a co-lead actor in a feature with ‘No Escape,’ which is now On Demand and Digital, courtesy of Vertical Entertainment. The timely movie was written, directed and produced by Will Wernick. In addition to Janko, the adventure thriller also stars Keegan Allen, Holland Roden, Denzel Whitaker, Ronen Rubinstein, Pasha Lynchnikoff and Siya.

‘No Escape’ follows a popular adventure-seeking American social media star, Cole (Allen), travels with his girlfriend, Erin (Roden), and their friends, Dash (Janko), Thomas (Whitaker) and Sam (Siya), to Moscow to capture new content for his successful vlog. Always pushing the limits and catering to a growing audience, Cole and his friends enter a world of mystery, excess and danger as they decide to participate in an extreme underground escape room. As the line between real life and social media is blurred, the group must fight to not only escape, but also survive.

Janko generously took the time recently to talk about starring in ‘No Escape’ during an exclusive interview over the phone. Among other things, the actor discussed that he was initially apprehensive about appearing in a genre film, but once he read Wernick’s script for the drama, he immediately changed his mind, in part because Dash provided much needed comedic relief to the otherwise tense horror-driven story. The performer also noted that he likes that the movie warns its viewers that they shouldn’t allow social media to continuously influence their actions, especially just to satisfy the desires of their followers, as it can negatively impact their real lives.

ShockYa (SY): You star in the new horror film, ‘No Escape.’ What was it about the script that convinced you to take on the role? How did you become involved in the drama?

George Janko (GJ): When I received the script, it was exciting, because I told my team that good horror flicks are very hard to come by, since there are a lot of cheesy ones. I didn’t want to be a part of, or put my name on, a cheesy movie, so that way a couple years down the road, I wouldn’t be embarrassed by my involvement.

So my agent said, “Why don’t you read this script before you turn down a horror flick,” so I said okay. When I decided to read the script, I was only going to read the first two or three pages, but then it became five, 20 and 50, and then all of a sudden, I finished the whole thing. I then called my agent and said, “I need to be a part of this now!” (Janko laughs.)

SY: Your character of Dash brings much needed comedic relief to the otherwise horror-driven story. What was the experience like for you to bring his humor to the screen?

GJ: It felt good, and reflects how I carry myself in real life. Like the characters, you also go through tough and awkward situations in real life, so I always revert to comedy, as well, to lighten the mood, and make sure the tension isn’t high. When you bring that to a bigger screen, it’s even more exciting, as you can watch people not only get scared and nervous, but also start dying of laughter.

People feel a tightness in their chest when the movie’s going down, but when one of the characters allows them to laugh, it’s a good feeling. So it was nice to allow the audience absorb those laughs in between the tense moments.

SY: The movie depicts how social media is continuously changing people’s actions, and influencing them to constantly take higher risks to gain more views and followers. Why do you feel it’s important to showcase, in this current technologically-driven culture, how the younger generation in particular is constantly adjusting their behavior to satisfy the needs of their followers?

GJ: I think it’s good to see it from a different point-of-view. Many people lose their souls, and sight of life, to different things in life, like money and fame. Now, with social media being such a new aspect, and having a lot of followers can create a new source of income, people are trying to do whatever it takes to get to the top. So it was great to see in the movie that while social media is cool, people shouldn’t get lost in it.

SY: ‘No Escape’ was written and directed by Will Wernick. What was the experience like of working with him on creating Dash’s arc in the thriller?

GJ: Will was the first director I worked with on a movie, as I’ve never been cast in a movie before. So it was really exciting to see how a real director worked. It was so exciting to work with someone who’s as talented and cool as him.

In Hollywood, there are a lot of big directors who are very talented. But it’s also scary and intimidating to work with them at times, as they’re trying to get their work done, and they don’t care what happens, as long as it gets done.

But Will is so talented that he doesn’t need to make anyone stressed; he was relaxed, and brought the best out of everyone. So it was such an amazing experience to work with him, and he was so talented.

SY: The film also stars Keegan Allen, Holland Roden, Denzel Whitaker, Ronen Rubinstein, Pasha Lynchnikoff and Siya. What was the process of working with them to build your characters’ backstories, motivations and relationships?

GJ: I didn’t get to hang out with them before we got to the set. I first met them at the table read, and was able to talk to them for a few minutes afterward. When we then got to the set, and Will yelled “Cut,” we were able to talk to each other between our scenes, as we were getting our make-up done.

So we quickly bonded; on the first day, we didn’t know each other, but we then became great friends after that. It was really cool, because it’s a lot easier to shoot projects with people you enjoy being around. So when we became friends in real life, it was easy to pretend that we were friends in the movie, too.

SY: Dash and his friends are continuously capturing their fight for survival in the escape room, and vlogging their experience to their followers. What was the process of working on your physicality for the role, to showcase how Dash’s fight for survival?

GJ: There’s a stunt in the movie that kind of looks like it’s CGI. I don’t want to give it away completely, but there’s a stunt where something’s coming towards my eye. It gets so close to my eye, and the way we were shooting, I knew it could get closer.

I felt that everyone in the room was so uncomfortable, because they didn’t want this stunt to not work properly. When we were done with the stunt, every yelled, “Cut! We got it!” It was my first tiny stunt that made everyone uncomfortable, and it was a great moment!

SY: The drama is set in Moscow. What was the experience of shooting the film on location? As an actor, do you prefer shooting your movies on location?

GJ: The movie was actually shot in L.A., but we had a great budget to make it seem like we were in Moscow. It was nice to be able to shoot not too far from home! (Janko laughs.) So I was able to go home when I wanted to, which helped make the experience of making this film so perfect.

So being able to shoot in L.A., as well as working with Will and the rest of the cast and crew, and creating the story that we shot, made it feel like all of the stars were aligned. This was like the biggest dream come true; there isn’t one thing that I would change about working on this movie.

SY: ‘No Escape’ (is now available) On Demand and Digital. Why do you think the digital release is beneficial for a horror thriller like this one?

GJ: This release is cool, because it’s a different time right now. I always tell people, just because the release went this way, and not the usual theatrical way, doesn’t mean that it’s a bad way.

It’s also cool that we (were) able to have a private screening in a theater. The cast and crew (were) able to invite their friends and family to watch the movie in a drive-in movie theater. It (was) a cool experience, because life’s more exciting when you don’t know what’s happening…I always like to be on my toes with things, and this movie had definitely kept me on my toes.