Striving to overcome their feelings of despair about the obstacles in their lives is a continuous struggle that protagonists are regularly forced to contend with in relatable cinematic character studies. That’s certainly the case for the two vulnerable heroes in the new drama, ‘The Atlantic City Story.’ The movie powerfully explores how the protagonists’ chance meeting offers them feelings of hope and love as they both seek forgiveness for their actions, as well as set out to absolve the sins that have been committed against them by the people in their lives.

Henry Butash made his feature film writing, directorial and producing debuts on ‘The Atlantic City Story.’ The drama had its world premiere at the Denver Film Festival on October 23, and will be available to watch until this Sunday, November 8 through the festival’s official website.

‘The Atlantic City Story’ follows Jane Carver (Jessica Hecht), an unhappily married woman who spontaneously leaves her husband and their home during a moment of crisis. With their adult children now living on their own, Jane begins to question her place in her family’s lives, especially with her husband dedicated to his job. So she decides to go to Atlantic City for the weekend, in an effort to reflect on what she wants to do next with her life.

After she arrives at one of the casinos, Jane meets a young gambler, Arthur (Mike Faist), and an unlikely bond grows between them. However, they soon realize they both can’t run from their problems forever, and together they must find the strength to go on.

Butash generously took the time this week to talk about writing, directing and producing ‘The Atlantic City Story’ during an exclusive interview over the phone. Among other things, the filmmaker discussed that he was inspired to make his feature film writing and directorial debuts in part because he wanted to bring his memories of visiting Atlantic City when he was a child to the screen. The director also mentioned that he instantly knew that casting Hecht and Faist in the lead roles in the movie was the right choice, as they developed an organic chemistry as co-stars.

The conversation with Butash began with the writer explaining what inspired him to pen the script for ‘The Atlantic City Story.’ “I grew up in New Jersey, so Atlantic City is very much a part of the Jersey shore. So it always had this mythic presence in my mind of what it represented, both in the present and the past,” he shared.

“In the 1930s-50s, it was very much a top destination as a resort town for a lot of Americans. Then, for various reasons, including financial issues, the city never quite transitioned into the 21st century in the same way as a place like Las Vegas has,” the scribe pointed out. “Atlantic City’s reputation has certainly fallen behind Las Vegas’ reputation. So I thought it was an interesting backdrop for a film.

“The process of writing the script took about a year. I would go down to Atlantic City on the weekends, or late at night during the week, and hang out there. I would go to different locations around town and hang out in the casinos, and see what kind of people would come and go and spend their time there,” Butash also shared. “I would just observe and take notes, and do research.

“There were also a couple of other inspirations for the script from other films, like (filmmaker) Jacques Demy’s (1963 romantic drama,) ‘Bay of Angels,’ which I really love. It has a similar set-up to ‘The Atlantic City Story,’ except that it’s set in Nice, France,”the filmmaker noted. “So the collage of the different (film) influences, and actually being in the ground in Atlantic City, evolved into what eventually became the script.”

Butash then delved into the fact that he also made his feature film directorial debut on ‘The Atlantic City Story,’ and what the helming process was like for him. “This was my first experience as a director, but I really love the process of being on set. I enjoy being reactive to what’s going on in the moment, including the performances, and if there was something going on with the locations, as it feels natural and organic. It was definitely a unique experience, but it was one that I really enjoyed.”

“I met Jessica for coffee, and we started talking about the script right away, and it felt as though I knew she was going to play the role (of Jane) almost right away. Once I met her, I knew she was perfect, and really related to the character,” Butash revealed. “Not too long after that, Mike came on board.

“Once we had both Jessica and Mike on board, it evolved organically. When we then began reading the script together, we started working on their chemistry. The three of us would talk about how important the chemistry between them was, and how the film depended on it,” the filmmaker continued. “The story doesn’t have an intense plot; it’s very much more of a story that’s driven by the mood between the characters.

“So we did rehearsals and read-throughs together, and re-wrote a lot of the dialogue, so the words felt very natural coming out of their mouths,” Butash added. “We also changed some little sub-plots, as Jessica and Mike felt inclined to, so it was a very collaborative process of re-writing with them.

“That way, when we were on set during production, my job of directing was a lot easier. The actors and I had this shared language on set about who the characters are, and what they do,” the director also shared. “So there also wasn’t a lot of course correcting necessary on the set because of our preparation. So the process of directing was actually very pleasant.”

Not only did Butash garner inspiration for writing ‘The Atlantic City Story’s story in the title city, the movie was also shot on location in the New Jersey coastal resort town. The filmmaker then explained what the process was like of filming the drama on location.

“Obviously, I felt the location was very important to the film, to the point that it’s even in the title. I wanted to show how interesting of a place Atlantic City is. Like I mentioned before, but it hasn’t quite come into the 21st century like a place like Las Vegas has,” Butash repeated. “There’s so much history there, so I wanted to show the parallel between the city and this woman who’s trying to figure out what her future looks like.

“The characters are trying to escape, which is what a resort town like Atlantic City represents. So with that in mind, it was obviously very important for us to film on location,” the helmer pointed out. “The whole town was so gracious to us, in terms of giving us flexibility to film in different locations.

“I wanted to get a wide range of locations that exist in Atlantic City, whether that be the casinos, the boardwalk, the beaches, the backstreets and empty lots. That gave us a taste of what the city has to offer,” Butash continued. “A lot of well-known local restaurants, like Gilchrist and White House Sub Shop, which was one of Frank Sinatra’s favorite places to go to get a sandwich when he was spending time in Atlantic City, allowed us to film inside. So that gave us a bit of a look into the history of what used to be, and still is, there.

“The same thing was the case with the casinos. There was a level of realism that we got that we wouldn’t have been able to get on a manufactured set. We had people there who were really gambling at 9am, and wandered into the shot accidentally, for example,” the filmmaker added. “That really lent a level of authenticity to the scene. So in general, shooting on location was very important to us, and I think it helped the film.”

In addition to writing and directing ‘The Atlantic City Story,’ Butash also cherished the opportunity to make his producing debut on the film. He then discussed how he balanced his helming and producing duties on the set.

“Luckily, the other other two producers on the film, Javier Gonzalez and Christian Sosa, were so fantastic to work with, and they handled the logistical challenges that came with making the film. There’s so much that goes into the day-to-day operations of making a movie that the audience doesn’t realize; they just see the emotions of the story, and get swept up in them,” the filmmaker pointed out.

“I think the three of us made a great team, and solved problems as they arose, like if a location falling through at the last minute, and we then had to find another location right away. We also created a schedule that was the most efficient to get the actors to the locations at the same time, so they weren’t traveling back and forth,” Butash continued.

“For me personally, it was a challenge to balance all of that with the creative side of making a film. But it was part of the process, for better or worse. Luckily, I had a great team around me to collaborate with,” the producer added.

With ‘The Atlantic City Story’ having its world premiere at the Denver Film Festival, the helmer appreciated the fact that the movie has been able to reach audiences online. “It’s definitely been different than what you would expect in a normal year. But obviously, the priority right now is safety, and I can’t personally complain about that. I’m very grateful to the Denver Film Festival that they selected the film, and felt it was worthy to be part of their program this year. That means so much to me, especially since this is my first film.

“When the pandemic first started back in March, no one really knew what the industry, or film festivals, would really look like. Having given so much time, energy and emotion to work on this film, there certainly was a period of uncertainty over whether the movie would be seen. So to get this sense of closure from he Denver Film Festival has been wonderful,” Butash concluded. 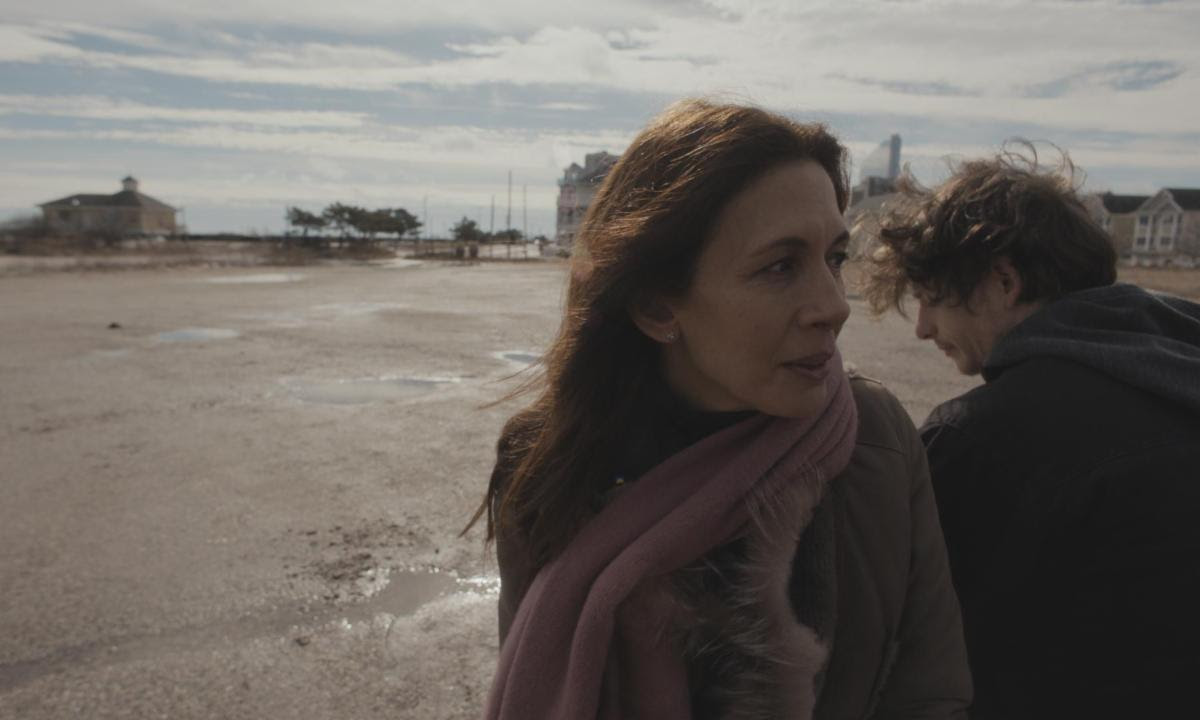