Another Round Movie Review 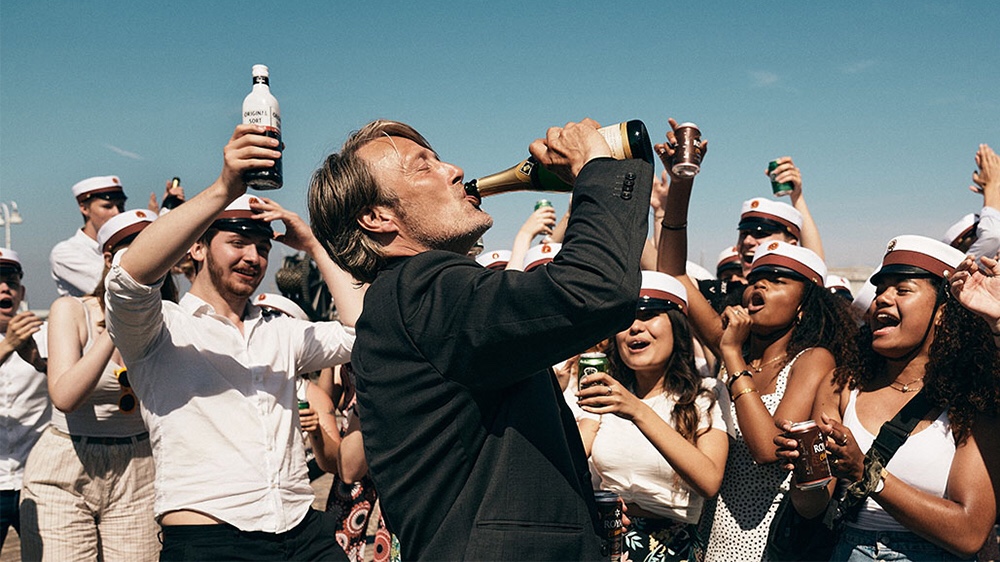 If you limit yourself to two glasses of wine per day (one for women) you’ll get a buzz. You will feel high, less inhibited, looser tongued, friendlier, more fun. So why do so many people drink until they’re stone drunk, passing out, vomiting, suffering the next day’s hangover? This life of drinking excess which leads to car accidents, broken homes, and lost jobs is a problem greater than people have faced with marijuana, but try as they may, politicians have been markedly unable to stop the disease of drunkenness whether by the 18th amendment, the Volstead Act that put teeth into it, and lectures from the schools and from Alcoholics Anonymous. In “Another Round,” Thomas Vinterberg, whose has often flirted with Dogme 95 (filming with natural light, unfussy camerawork and minimalism such as in his “The Commune” about life in a Danish commune during the 1970s), looks at a quartet of middle-aged high-school teachers “experimenting” with liquor.

One of the teachers I believe, calls attention of his friends to the theory by one Finn Skårderud that we are all born with a 0.5 percent deficiency of blood alcohol. This flaw can easily be corrected if we drank throughout the day but stopped at 8 pm. This concept works well, but only for a while. Martin (Mads Mikkelsen), a history teacher in a school with small classes, a professional sounding choir singing the praises of Denmark, and uniformed kids following their coach’s instructions to a letter, is unlike any public high school I’ve experienced. They’re a rowdy enough group but let loose with dancing and singing only on graduation day.

Martin, enjoying an alcohol high, becomes a better teacher immediately, quizzing his students about which of three powerful political men they would vote for, but he does not give away their names. Turns out that the vegetarian, the teetotaler, who never cheated on anyone, is the dude they would vote for. You probably know which 20th Century character that is. So: the guy who doesn’t drink is the one who turns out to be pure evil. There is yet another reason to hit the bottle, and you might be envious in the friendship that Martin enjoys with his faculty buddies.

A central theme that is virtually ignored for most of the time but takes on a big role in the concluding third of the film, the time that so many comedies turn serious, is Martin’s trouble with his wife Anika (Maria Bonnevie) He asks her if she considers him a bore, to which she replies that “you are not the same Martin that I once knew.” Maybe he should have quit then, but while he and his pals go well beyond the 0.5% blood alcohol, Martin’s marriage is headed for the rocks—not the ice that may be in his glass of Smirnoffs.

Though the quartet, one of whom sponsors his 40th birthday party which is the time that is officially the beginning of middle age, is fun to watch, the movie bogs down during the melodramatic third with a generic look at the final breakup of a marriage and an unfortunate occurrence that befalls one of the four. Despite the performance of the reliable Mads Mikkelsen, who enjoyed roles in “At Eternity’s Gate” as a priest during a film about Vincent Van Gogh, and “Arctic,” as a man who is stranded in the Arctic after a plane crash, his only moments of real drama here occur in the final minutes as he dances along with newly graduated high school students. Otherwise, whether pre-alcohol or post, his character is a bore.

The Danish title “Druk” means binge drinking. The film is in Danish with English subtitles.