First love, no matter what it looks like, can offer teenagers the hope and courage to be who they truly are, and shape who they will become for the rest of their lives. That important message drives the new romantic comedy-drama, ‘Dating Amber,’ which serves as a love letter to the adolescents who feel different and need to escape in order to be themselves.

The relatable coming of age movie, which chronicles how teens are influenced by how they’re loved by the people in their lives, is now playing on digital and On Demand, courtesy of Samuel Goldwyn Films. ‘Dating Amber’ was written, directed and executive produced by David Freyne, who based the script on his experiences when he was an adolescent.

The comedy-drama stars Lola Petticrew in the title role, as well as Fionn O’Shea, Sharon Horgan and Barry Ward. Set in a small town in County Kildare, Ireland during the mid-’90’s, the story follows Eddie (O’Shea) and Amber as they decide to stage a romantic relationship in order to stop everyone speculating about their sexualities. Eddie is keen to follow his Dad into the military, while Amber dreams of moving to the liberal hub of London. However, their ideal arrangement soon begins to fall apart, which leads Eddie deeper into denial. As a result, Amber realizes that a perilous future awaits her best friend unless she intervenes.

Petticrew generously took the time recently to talks about starring in ‘Dating Amber during an exclusive interview over the phone. Among other things, the actress discussed that she was immediately interested in portraying the eponymous protagonist in the movie because the story uniquely interweaves the platonic love story between a queer boy and a queer girl with the essential message that queer teens have a support system within the community when they’re ready to publicly share the news of their sexuality. The performer also shared that her working relationships with O’Shea and Freyne were organic, as the scribe-helmer-producer valued the actors’ input on their characters’ arcs.

Lola Petticrew (LP): I was emailed the script by the casting director (Louise Kiely). I got the entire script, and that doesn’t always happen. When I first read it, I was immediately taken by it. Sometimes when a script lands on your lap, you really want to do it, and I felt that this was a script that I really wanted and needed to do.

I’ve never read anything like this before-a romantic comedy that focuses on a platonic love story between a queer man and a queer woman. It felt different, and like something that queer cinema really needed. So from there, I convinced everyone that I was right for the job.

SY: While you initially read the screenplay, and then went on to play the title character, how did you relate to her journey, as she comes to terms with her identity?

LP: I think the great thing about Amber is that she’s incredibly strong for her age, and she’s also an incredible friend. She creates this hope and bright future for Eddie. She’s quicker to realize that there’s a possibility of them being out and happy. I think that’s something that people need, especially now, when we all need hope. I also think that she’s incredibly fun, bold and quick-witted-she has a sharp tongue, and she’s a bit of a fire-cracker.

SY: Speaking of the fact that Amber’s quick-witted, while the film includes the important message that queer teens have a support system within the community when they’re ready to come out, the story also features moments of comedy. Why do you feel it was vital to also incorporate those moments of humor into your character’s friendship with Eddie?

LP: I love comedies, and I love whenever I have the chance to do them. It was lovely to have the chance to make a film that’s a mixture of comedy and drama. I think this film was especially good at finding the line between comedy and tragedy. I also think this story is really true-to-life, and some of the funniest moments come from our darkest times, which is a coping mechanism. David Freyne managed to write that beautifully. It was great that we had the chance to do that, and it was really playful. It was an incredibly freeing environment.

Being able to work with Fionn, who’s incredibly hilarious, and play off of him, was amazing. Sharon Horgan and Barry Ward are also incredible. When we shot the dinner table, I had tears in my eyes because it was so hilarious.

SY: Like you just mentioned, Fionn O’Shea plays Eddie, Amber’s new friend who she pretends to date, in ‘Dating Amber.’ What was the experience of also working with him, as well as with the rest of the cast, on creating the relationship between your characters throughout production?

LP: I think my relationship with Fionn was so organic, and we immediately hit it off. While we we auditioning, we knew that if we were going to get the roles, it was going to be because of the other one. I think we initially felt that with each other.

We stayed behind after the chemistry read and chatted with each other for about an hour, and I knew that we were going to be friends, even if we didn’t get the roles, which we did.

We then had a lovely amount of rehearsal time, which is unusual for an indie film. During the rehearsal process, we had a chance to hang out. So by the time we started shooting, we genuinely were best friends. We were able to take a lot from our own relationship and put it into our characters’ relationship.

SY: The comedy-drama was written and directed by David Freyne, who you mentioned earlier. What was the experience like of also collaborating with him on building your character of Amber?

LP: David is an incredible writer-director, and I always say that I would work with him for the rest of my life, if I could. He’s so talented that when I first read the script, everything was there. The characters were three-dimensional.

Throughout the rehearsal period, he allowed Fionn and me to give so much of our own input, which is rare. It really did feel like a massive collaboration, and he gave us a say in things. He created the most wonderful work environment, and we went in every day and worked with friends. It was like lightening in a bottle.

SY: Amber and Eddie embark on several comedic adventures throughout the story as they build their relationship. What was the process of creating the physicality for Amber?

LP: We worked quite a lot on the physicality. The funny thing about these characters is that they contrast each other. Eddie is more refined and straight-jacketed by toxic and hyper masculinity; his whole existence so far is driven by masculinity. Meanwhile, Amber is much more relaxed with herself. So I was trying to incorporate her internal feelings into the physicality.

SY: One of the most essential aspects of the story is that while she builds her relationship with Eddie, Amber finds the courage to finally truly accept who she is, regardless of what other people think. Why is it important to you to showcase how Amber and Eddie give each other the courage to be who they need to be, and shape who the other is to become as an adult?

LP: It’s definitely important to show them coming to terms with who they are, and offer hope to people watching it. We were always saying while we were making the film that we wanted to create a clear coming-of-age, rom-com, queer story that offers hope, joy and light. Sometimes, queer films can feature darker themes, and those films are absolutely necessary.

I think that queer kids especially deserve to see their lives can be filled with hope. They also need to know that coming out is a joyful thing, and after that, there’s a community of people that will support, love and adore them for who they are

SY: ‘Dating Amber’ is largely set in small-town Ireland. What was the experience of shooting the comedy-drama on location in County Kildare?

LP: It was great that we were able to film in (the town of) Kildare, which is where the story’s set, and it’s absolutely beautiful there. We really lucked out that we were able to spend time there. We were also able to film in the military base in County Kildare, which was great, because I think the last thing that filmed there was ‘Braveheart.’ (laughs) It was also lovely to be there, because David grew up in County Kildare and its military base, so it was really nice to have that personal connection.

We also filmed in Dublin, and Fionn and I both lived there, so it was also incredibly personal for us to shoot there. It’s such a beautiful city, and so nice to be able to put it on camera and share it with the world.

SY: The movie is now playing in America On Demand and Digital, courtesy of Samuel Goldwyn Films. Why do you feel the digital distribution is beneficial for this type of film?

LP: It’s really exciting. With everything that’s happening in the world, people can use an hour-and-a-half of joy, laughter and hope. I’m really excited for people to see it, and we always say that we need to share this movie with the audience that needs to see it. If even one person can feel like they’re represented, I think it’s a job well done. 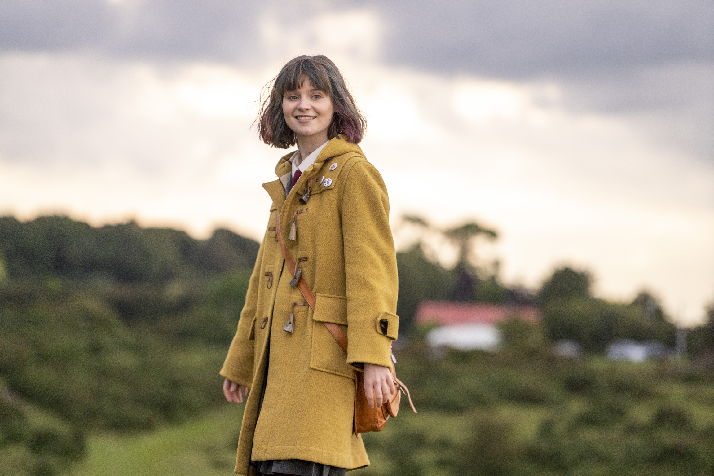