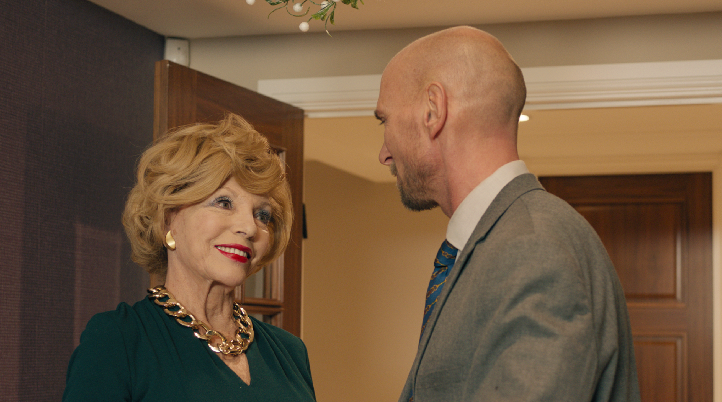 It’s only when people have lost everything that they truly realize what they’ve been missing. That’s certainly the case for Dame Joan Collins and Luke Goss‘ characters of Margaret Rogerton Sykes and Martin Dyer in the upcoming holiday film, ‘The Loss Adjuster,’ which Trinity Creative Partnership is distributing today on VOD and Digital.

In honor of the comedy-drama’s release, ShockYa is debuting an exclusive clip from the feature, which is titled ‘Get Back On The Horse.’ In the clip, Margaret gets cozy with Martin, who’s the title loss adjuster.

Trinity Creative Partnership has unveiled the following synopsis for ‘The Loss Adjuster’:

Hapless insurance loss adjuster, Martin Dyer, feels his life is spiraling out of control. But he soon discovers that even when you reach rock bottom, some clouds really do have a silver lining.

Watch ‘Get Back On The Horse’ above, and the official music video for ‘A Christmas Wish,’ the single and theme from ‘The Loss Adjuster,’ which is sung by Beverly Knight, below.

ShockYa is debuting an exclusive clip from director Vincent Woods' comedy-drama, 'The Loss Adjuster,' which is titled 'Get Back on the Horse,' and features Dame Joan Collins and Luke Goss.