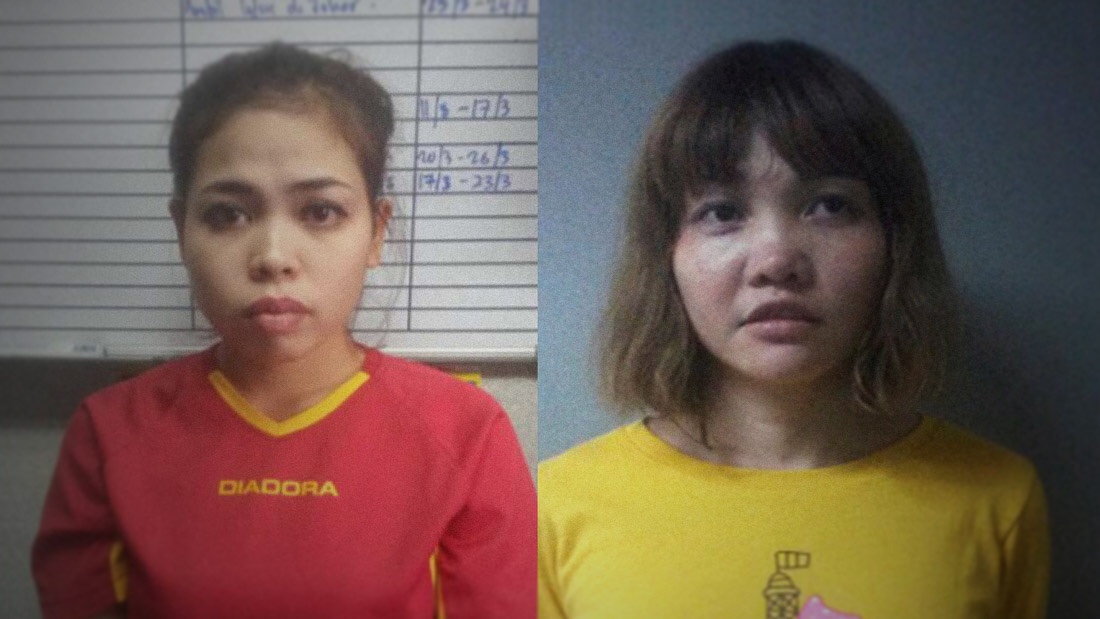 The GQ article which Ryan White adapts for his film (see link above) is exciting enough to make anyone think: “A film version. That would be terrific.” Here’s an excerpt: “Already, the liquid that the women had applied was seeping into Jong-nam, rapidly jamming his muscles’ receptors in the ‘on’ position, causing his muscles to constantly contract as if struck by endless cramps. The liquid was VX, a chemical weapon that the CDC calls the most potent of all nerve agents and that the United Nations classifies as a weapon of mass destruction. He absorbed a lethal dose, which could have been as small as a drop.

“Jong-nam started toward the bathroom—and then lost his only chance to wash off the poison and survive when he rerouted to a nearby information desk. There, he moaned in English, “Very painful, very painful, I was sprayed liquid.”

You would never think that two young women, Indonesian Siti Aisyah and Vietnamese Doan Thi Huong, would be implicated in an international cause celebre, but youths are often tempted to do nutty things when under the illusion that they can become famous and enjoy careers as actresses. Their painful coming of age began when they were told that they could make money doing prank videos. Inspired by the movie “Jackass,” Siti and Doan, who became “like sisters,” are asked to sneak up behind Kim Jong-nam, not told that he was the half brother of North Korea’s leader Kim Jong-un. When Jong-nam was booking a ticket at the Kuala Lumpur airport, they would successively sneak behind him and run what they thought was simply hand lotion into his face, around the eyes. In truth, their hands were covered with VX, the most potent nerve agent known, which would cause death in fifteen minutes one hour.

As you can guess from the excerpt of the magazine story, Jong-un died painfully, the perps running away, washing their hands, unimpaired thanks to the natural fat in the hands. The North Korean agents took off, and Malaysia, worrying about its global prestige, had to find a scapegoat. The two young women are jailed, tried over a period of some fifty days, facing automatic hanging if found guilty of murder.
Two parts of this film are terrific. One is Helen Kearns’s editing, involving the taking of the airport’s surveillance film, giving it narrative shape, even highlighting the crime under a bright light with imaginative arrows pointing to perps and victim. The other is the suspense. You will wonder about the results of the long trial, the young women obviously scared out of their wits, eager to go home and concerned that they were being railroaded.

Politics rears its head when first the ambassador of Indonesia arrives to try to affect the judge’s verdict, then an approach from the Vietnamese ambassador to Malaysia, who for reasons given is not as confident that he can succeed in getting his citizen off.

Director Ryan White made his political interest felt with his film “The Case Against 8,” the attempt to overturn California’s ban on same-sex marriage. Here he keeps the tension going as though he were filming a mafia action, with the all-powerful Kim Jong-un (that’s the guy who Trump considers one of his best friends), who must have taken a cue from Putin’s skill in poisoning opponents’ beverages and upping that to VX.