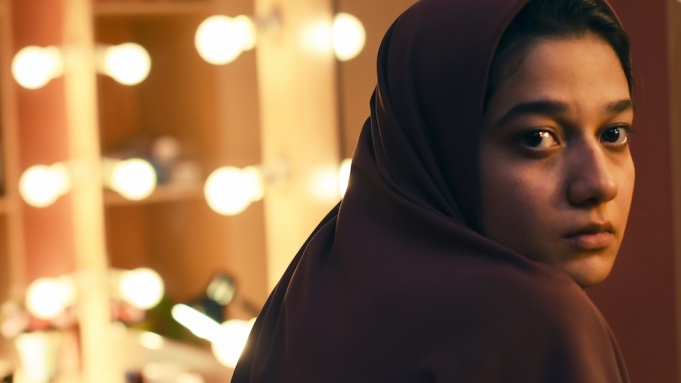 If you think that the United States has gone through bizarre times during the last four years—which it has—wait till you see what’s going on in Iran. I don’t mean the general way that religious fanatics have taken over, determined to lash out at = the U.S. The Great Satan, pointing their fingers at us for our promiscuity, our consumerism, our spending more money on the military than the next ten nations, and breaking solid treaties not only with the Islamic Republic but as well with scientific bodies. Consider their system of allowing the families of murder victims to forgive the perpetrators of crime thereby saving them from a hanging, which to their culture involves both following the religious precept “an eye for an eye,” and allowing the felon to give “blood money” to the families of the deceased instead of paying for the crimes with their lives.

This concept of forgiveness is on trial in “Yalda, A Night for Foregiveness,” which (and this is really what’s bizarre) bringing the immediate family of the victim face to face with the felon on a TV reality show, by which the audience of millions at home, at the conclusion of the give and take between victimized and felon, can text their idea of a just verdict to the show’s producer and decide whether to allow the TV station itself to pay the blood money to the family. The ultimate decision, though, is in the hands of the victim’s immediate relative, though there appears to be a conflict of interest. The relative can refuse to forgive and send the offender to the gallows, then winding up with nothing but satisfaction. Instead, the family can forgive and add quite of number of rials to their account at the Bank of Iran.

As written and directed by Massoud Bakhshi—whose “A Respectable Family” deals with a professor who returns to Iran after two decades abroad—Maryam (Sadaf Asgari) has been convicted of killing her husband, a man several decades older, the alleged motive being that she is after his money. But then, here’s even more bizarro. Iran may not be as bound to puritanical religious ideology as you may think. For reasons that include the fact that many young Iranians have put off marriage for financial and other reasons but still have sexual needs, the country’s law allow for temporary marriages. This might be considered to us a form of legalized prostitution, but it’s a way that the Muslim state puts the cloak of legitimacy on a union—something like what we in the U.S. consider a partnership but with the right of inheritance.

Did she kill her husband for his money, as his daughter Mona (Behnaz Jafari) believes, or was it an accident as Maryam insists? The two are brought face to face in a reality show moderated by Omid (Arman Darvish), after an opening of the story with a stunning view of the Milad Tower in Tehran. The producer is Ayat (Babak Karimi), and, coaching her daughter, her mother (Feresteh Sadre Orafaly) advises her to show humility, to apologize, virtually to kiss Mona’s butt. The daughter, who is about 17 years of age and not yet imbued with the need to compromise, holds that the killing was an accident, so why apologize? Nonetheless, at the appropriate time, she begs Mona to spare her life while Mona, despite being a woman with class and education, is conflicted between wanting the blood money and wanting revenge in the name of her dad.

Everyone but Mona hopes for forgiveness. Even the prosecutor urges Mona to relent, to commute the sentence to no more than six years, provided that enough viewers sympathize with the teen and vote thumbs up through their cell phones.

Though at times you could swear that the whole business is a parody of our own reality shows, junk productions like “The Assistant,” you could forgiven if you are drawn into the emotions of the program, wanting to talk to the screen and tell Mona to spare a life, take the money and run. A further complication centers on Maryam’s mother’s manipulation involving a baby, adding to the melodrama that were it not developed with honesty and authenticity could have landed “Yalda” into soapy territory.

The title of the movie involves a night of celebration (something like our own glorious November 7th, 2020), during the winter solstice when families and friends get together to drink and to eat pomegranates and nuts, a holdover from the ancient Zoroastrian religion. This film won the Sundance Festival Grand Jury prize, doubtless considering the performances of the two female leads—Sadaf Asgari, tight-lipped, confused, virtually shuddering with fear of imminent death, and Behnaz Jafari as a woman of a higher class who had gotten Maryam a job with her father and now regrets ever laying her eyes on her. Up to the final minutes, you will be convinced that she will pardon the offender, but no, maybe she would not, given her contempt for the person of a lowly class who allegedly seduced Mona’s dad but is told that the opposite is true: that the victim, already married, begged the young woman to agree to a temporary marriage provided that no pregnancy take place.

In Farsi with English subtitles.

Cancel reply
Exclusive: Arturo Lizardi Video Interview and Clip For Trail of Ashes
To The Ends of the Earth Movie Review
To Top