The most iconic, effective genre movies don’t just rely on visual scares to frighten their viewers; they also depend on grounding their narratives in their characters’ emotions, motivations and overall arcs. First-time feature film writer-director, Braden R. Duemmler, did just that with his new supernatural horror thriller, ‘What Lies Below.’ The drama features an ever-growing, powerful tension between its strong-willed young protagonist, Liberty, who’s played by Ema Horvath, and her worthy adversary, her mother’s new fiancé, John Smith, who’s portrayed by The Space Between Us.

‘What Lies Below’ is now available On Demand and Digital, courtesy of Vertical Entertainment. Its story follows Liberty, a socially awkward 16-year-old girl who returns home after being at camp for two months. Upon her return, she’s blindsided when she’s suddenly introduced to her mother Michelle’s (Mena Suvari) new fiancé, John Smith, whose charm, intelligence and beauty make her start to question if he’s not only hiding something, but also too perfect to be human.

Tucker generously took the time last week to talk about starring in ‘What Lies Below’ during an exclusive interview over the phone. Among other things, the actor discussed that he was drawn to play the movie’s antagonist because he’s two different people who are aligned all of the time, as has a public side that he’s showing everybody else, which often contradicts his true nature. He also noted that he enjoyed collaborating with Duemmler, Horvath and Suvari, as the scribe-helmer often allowed the performers to infuse their own ideas about their characters into their portrayals.

The conversation with Tucker began with him explaining what drew him to play John in, and how he became attached to, ‘What Lies Below.’ “I think it was late 2018 when I first read (the script), and did an audition for (the film). It wasn’t anything that I had done before, which is always fun,” he divulged.

“I really liked the idea of playing John because he’s constantly of two different minds. He’s two different people who are aligned all of the time; he has this one side that he’s showing everybody, as well as this other side that’s really going on beneath the surface,” the actor shared. “That’s really fun as a performer-I got to play someone who’s a little more complex, and experiment and have fun (with the character). I was thrilled to get to do it.

“Also, predominately doing a small movie with two other (performers) was a really fun prospect. So I was happy to get to do it,” Tucker added.

Further speaking of the fact that John has two different sides to him, including the fake persona that he shows to Michelle and Liberty, as well as his real personality that he’s hiding from them, the performer cherished the process of creating the true depth of John’s overall character. The process “was quite fun. Brad, the writer-director, was really good with this; he gave us a lot of freedom to figure things out,” he shared.

Duemmler “also helped us feel safe as performers, because we knew that he was going to tell us where the guardrails were…so we knew we were very safe to experiment with things,” Tucker divulged. “It was a lot of fun; we did a lot of takes, and tried different things.

“There wasn’t a lot on the page about where (John) comes from, or what he’s about. So Brad was good in letting me invent a lot of that, and he helped me tighten that up as needed,” the actor continued. “It was fun to figure out this blank person, and try to show something about him.

“We worked to figure out his background, so that on the day, we had options. We would do different takes, and Brad could then say, ‘Do something a little more creepy, or let’s do something to lift up the mask, and let it slip a little bit more.’ So we would do (the takes) in a bunch of different ways, which was easy to do, because we did the background work,” Tucker revealed.

Also following up on his experience of collaborating with Duemmler as the writer-director, the performer further shared his overall experience of working with the filmmaker on the drama. When the cast and crew works together on a movie, “everybody’s job is to work together to tell a specific story. When you have someone at the helm who’s also the creator of the story, it makes it very easy to explore stuff with that person. You know that they’re going to guide you to the correct shape that they have in mind to tell the story.

“Brad was great with that. He had a very clear concept of the narrative that he wanted to express. He did a great job of communicating that to us, and also letting us play around with” their portrayals of their characters, Tucker added.

Not only did the actor enjoy working with Duemmler on developing his character of John during ‘What Lies Below’s production, but he also cherished the opportunity to work with Horvath and Suvari on set. “Ema and Mena are both terrific people, and wonderful to be with on set. We were really lucky that the three of us got along the way we did. They were both eager to tell the story we were there to tell,” he noted.

“I really enjoy when there’s a good camaraderie and sense of connection between me and the other performers. It makes me feel very comfortable to go to whatever places we need to in order to get the scene right, without fear of being criticized, or someone being frustrated or disappointed with what you’re doing,” Tucker also revealed.

“There’s no worry, as it’s easy to converse with that individual to get things right. There also was no mental barrier to engaging with both of them, so we were able to work until we were able to figure out the relationship in whatever scene we were playing. That makes it a rewarding collaborative moment,” the performer added. “It was like that with the both of them the whole way through.”

The story initially hints that Libby’s hesitation to like John are just in her imagination, especially as Michelle put her own desires for a romantic connection over her daughter’s fears about him. Tucker then delved into what the process of creating the underlying tension between John and Libby, and make viewers question if she just has teen angst about her mother’s new, unexpected romantic relationship, was like during production.

“A lot of that was stuff we discovered as we went along. We went into (each scene) with an idea, and we started there. With every take, we would try a different level of how much (John) was revealing. We had to discover that as we were going through the story, and decide how much (to reveal) is appropriate at each moment,” the actor continued.

“So we did a lot of variations to see what felt right. In some takes, we were very subtle in what we showed, and in other takes, it was obvious that there was something off about him. We did those variations for most of the scenes,” Tucker revealed. “That way, once (the movie) was (being) cut together, there was a flexibility in what we could show. You kind of have to see the whole together together to know if things are escalating at the right volume.”

With ‘What Lies Below’ being a horror-sci-fi-driven film, the performer also enjoyed the process of creating the physicality for his portrayal of John. “I had a lot of help from Brad. I had my own ideas, and he helped me sharpen them,” he shared.

John’s “someone who’s portraying something; he’s giving an image to these two women, and every bit of that is calculated,” Tucker continued. “So part of my job was to know what my character was trying to accomplish-and hide-in each scene. Knowing those things informed how I would physically behave (as John). The whole thing was just a performance; during the whole movie, he’s just performing for these two women…and that was really fun.”

The story is set in the family’s lake house and surrounding property, which made the experience of shooting the drama on location one that the actor also enjoyed. “The place where we shot was beautiful; you could point a camera anywhere, and it looked great,” Tucker shared.

“We had three locations-there were two houses, as one was used for the interiors, and the other was used for the exteriors. Then the basement was a set, and they did such a good job dressing it, which helped our mindsets. It’s a very lucky thing to have a set that inspires you, and this one certainly did,” Tucker concluded. 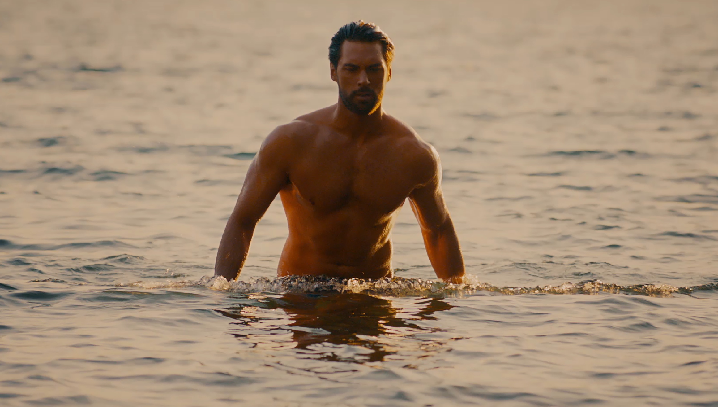