Inside Joe Biden’s First Attempt to Sell out to China. Can we Risk Another?

As VP, Biden took Air Force 2 for a little vacay in Beijing. His souvenirs? Crappy deals for the U.S.A. and a sweet $1.5 billion deal for son Hunter 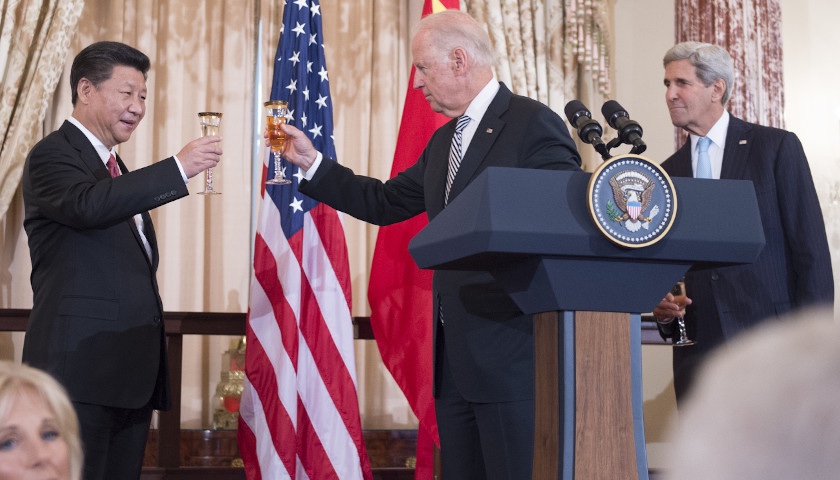 “I’ve taken crime families apart — every kind,” says Rudolph Guiliani. “But the Biden family crosses every acceptable line. It’s treason is what it is.” This from the gripping OAN documentary, “Biden’s China Sellout.” (Stream the best in conservative news now at FilmOn.)

It comes up again and again. Joe Biden being soft on China. Sure there’s plenty of tough talk, but he seems to get as soft as day old lo mein as soon as he crosses into the Communist country’s airspace.

That’s what he did in 2013 when Barack Obama sent him to straighten out China over it’s South China Sea incursions. A trip he took his cracked-up son Hunter Biden on for no discernable reason.

“He came back with nothing,” says Rudy. “Worse than nothing: he gave them everything. He agreed to stop running U.S. military patrols in the region so that China could build the islands it wanted loaded with high powered missile systems.”

“But he came back smiling,” continues Rudy. “Weird right? You lose you’re shirt but you get off the plane smiling.”

We now know the reason. While in China on that trip Hunter signed Communist party-connected investors to $1.5 billion in deals with his shady little hedge fund.

Joe Biden has always said a “rising China” was good for the world. Increasingly, it seems, he meant HIS world.

And here’s the thing, as this OAN documentary on Hunter Biden makes clear. If Joe Biden becomes president the debt to China the Biden’s carry comes due. The CCP will want to make good on their investment–the $1.5 billion and other details that Rudy has submitted to the State Department to investigate but that can’t be exposed yet.

Even the New York Times is concerned that Biden’s China policies don’t favor the U.S.

Everyone likes Chinese food. It’s just that the way Joe Biden operates, it might become the only thing we’re allowed to eat in America soon enough.

You can always watch essential conservative news at FilmOn.com.