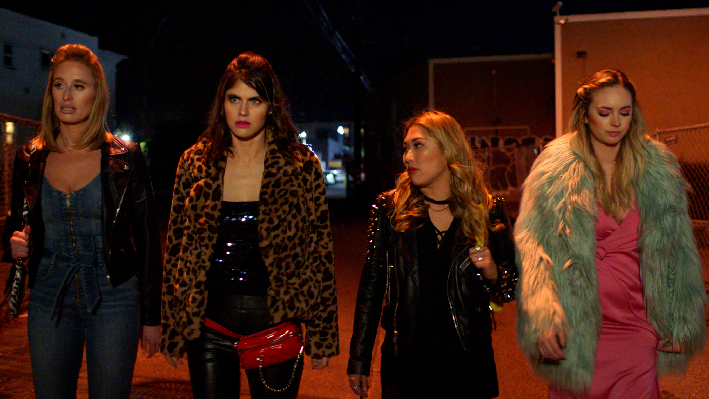 Women are enthralling proving yet again that they’re just as talented and distinctive as their male counterparts in the movie industry. Up-and-coming filmmaker, Penelope Lawson is showing what a natural maverick she is with her new raunchy comedy, ‘1 Night in San Diego.’ She wrote, directed and executive produced the relatable buddy comedy, which shows how female friends can be just as independent, and have just as much fun, as men who are looking for a night of excitement, and ultimately find their sense of purpose in the process.

The filmmaker’s breakout movie stars ‘Glee’ alum Jenna Ushkowitz and ‘Modern Family’ veteran Laura Ashley Samuel as the two best friends. Their at-times reckless night of fun, which ultimately turns into a life-affirming adventure, can now be viewed on VOD, including FandangoNOW, Vudu and Amazon Prime Video, courtesy of 1091 Media.

‘1 Night in San Diego’ follows two best friends-former reality TV star, Hannah (Ushkowitz), and her conscious best friend, Brooklyn (Samuels)-as they decide to take a road trip to the title California city to reconnect with an old high school crush, Christian (Mark Lawson). When he doesn’t live up to their expectations, the pair decide to have fun on their own, and go to the club HAM. Hannah gets recognized in the club by two fans, Kelsey and Delia (Alexandra Daddario and Kelsey Douglas), and the quad hits the town. But things don’t go as planned for Hannah and Brooklyn, and their trip turns into a night of chaos and debauchery, which ultimately tests the deepest bonds of their friendship.

Lawson, Ushkowitz and Samuels generously took the time recently to talk about writing, directing, producing and starring in ‘1 Night in San Diego’ during an exclusive video interview over Zoom. Among other things, the filmmaker and actresses discussed why they feel it’s important for filmmakers to create buddy comedies that star women in the lead roles, and what their experience of creating the humor together for the movie was like during the production. The trio also noted that they enjoyed creating the physicalities for the characters of Hannah and Brooklyn, especially their physical comedy, fight sequences and costumes, as they helped bring the protagonists’ friendship and personalities to life.

Watch our exclusive video interview with Lawson, Ushkowitz and Samuels above, and the official trailer for ‘1 Night in San Diego’ below.