Video Interview: Drew Harwood and Gareth Koorzen Talk The One You Feed (Exclusive)

Expanding on society’s current understanding of all aspects of sexuality is one of the most vital lessons that the entertainment industry is currently delving into through timely movies and television series. The filmmakers behind the new thriller, ‘The One You Feed,’ have made an intriguing, emotional LGBTQ feature that’s helping normalize sexuality and all sexual orientations, and remove labels that negatively impact people’s emotions and mentality. The drama’sstory, which features a dangerous love triangle that defies norms, effortlessly displays sexual expression in its simplest form.

Gravitas Ventures is releasing ‘The One You Feed’ today on North American digital HD internet, cable and satellite platforms. The thriller marks the feature film directorial debut of Drew Harwood, who also served as the drama’s production designer, costume designer and editor. The filmmaker also starred in, and produced, the movie, alongside Gareth Koorzen. The duo crafted the story for the movie, and Harwood subsequently wrote the script, as well.

‘The One You Feed’ follows a man, who later becomes known as The Stranger (Koorzen), as he ventures into the wilderness to scatter the ashes of his late former lover. During his tribute, he’s attacked by a wild animal, after which he’s rescued by a mysterious couple, Man and Woman (Harwood and Rebecca Fraiser). The couple holds The Stranger captive at their old-fashioned farmhouse, where they alternately berate and seduce him. The trio is left to ponder what true love really is, and if they’ve finally found true happiness together.

Harwood and Koorzen generously took the time recently to talk about writing, directing, producing and starring in ‘The One You Feed’ during an exclusive video interview over Zoom. Among other things, the filmmakers discussed what inspired them to collaborate together on creating the story for the thriller, and what the process of working on the script was like. They also delved into what the process of balancing their directorial, producing and acting duties during the production of the drama.

Watch our exclusive video interview with Harwood and Koorzen above, and the official trailer from ‘The One You Feed’ below. 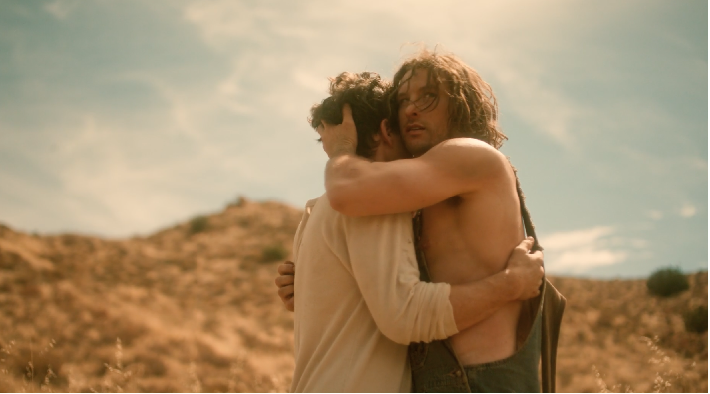