Seemingly living in the shadow of one of the world’s most successful individuals can often feel like a repressing situation for many people. But versatile actor-singer-songwriter-guitarist, Frank Stallone has powerfully never allowed his brother Sylvester‘s success as an Academy Award-nominated filmmaker stand in his way of achieving his own notable accomplishments as a performer. Frank’s stunning journey to become one of the most famous least-known talents in Hollywood is highlighted in the new documentary, ‘Stallone: Frank, That Is.’

Branded Studios is releasing the movie today on VOD and Digital. It was written and directed by Derek Wayne Johnson, who also served as one of the producers, alongside Frank.

‘Stallone: Frank, That Is’ highlights the acting and music careers of the title performer, who has remained one of the most versatile talents in Hollywood for over four decades. As a musician, he has released three Platinum Albums, 10 Gold Albums and five Gold Singles, and has been on the top the charts worldwide. He has contributed to the soundtracks of some of Hollywood’s most iconic movies, including ‘The Expendables 2,’ ‘Rocky I, II and III,’ ‘Rambo II,’ ‘Paradise Alley,’ ‘Over the Top’ and ‘Staying Alive,’ which earned him Golden Globe and Grammy Nominations.

As an actor, Frank has starred in over 75 films and television shows, including ‘Tombstone’ and the cult hit ‘Barfly.’ However, 45 years into his career, he still remain one of the least known famous faces in Hollywood. The documentary also features interviews with not only Frank, but also the people know him best, including Sylvester, Arnold Schwarzenegger, Billy Dee Williams, Billy Zane, Joe Mantegna, Geraldo Rivera, Danny Aiello, Frankie Avalon, Richie Sambora and John Oates, to explore why he never garnered more widespread recognition.

Frank and Johnson generously took the time recently to talk about directing, producing and appearing in ‘Stallone: Frank, That Is’ during individual exclusive interviews over the phone. Among other things, the filmmakers discussed how they decided to make a movie about frank’s career after they previously worked together on the 2017 documentary, ‘King of the Underdogs,’ which chronicles the life of ‘Rocky’ helmer, John G. Avildsen. The duo also expressed their appreciation that so many of Frank’s relatives, friends and collaborators, including his brother, readily agreed to appear in the film about his career.

The conversation with Frank began with the performer discussing what inspired him to make a documentary about his career in Hollywood. “I didn’t really have any aspirations to make a documentary. But the director, Derek Wayne Johnson, and his producing partners approached me with the idea. I had previously met them while they were making the documentary about John G. Avildsen, the director of ‘Rocky,’ called ‘King of the Underdogs,'” he shared.

“Derek told me, ‘We thought of something interesting; we’d like to make a documentary about you.’ Of course, I was taken aback, and asked, ‘Really?,’ the performer admitted with a hint of a laugh. “At first I didn’t believe it because in Hollywood you get a lot of” those types of prospects.

“But as we moved forward and it looked like the documentary would happen, I said, ‘I can help you get interviews with people I’ve met over the years; I can ask them if they’d want to do it.’ I think about 90 percent of the people we went to said ‘Sure, we’ve known Frank a long time and love him,'” Frank continued. “A lot of them have seen me play and know about my career, so they agreed to be in the film. That helped get the ball rolling.

“My brother was one of the early ones who got on board, and I was surprised; I thought he’d say, ‘I don’t want to do that,'” the musician admitted with a laugh as he imitated Sylvester. “But he got on board right away, and so did Arnold. They were some of the early guys who agreed to be in the film, and that helped us in the long run…I’ve known a lot of the guys who appear in the film for a long time, like Danny Aiello, Joe Mantegna and Geraldo, which is what helped make the documentary happen.”

Johnson began his interview by explaining why he was interested in helming the movie, and how he convinced Frank to make it. “I knew Frank for about a year before I approached him with (the idea) for the project, as we were kind of buddies. I had just finished a documentary about the director of ‘Rocky,’ ‘John G. Avildsen: King of the Underdogs.’ Obviously, Frank was aware of it,” he shared.

“One of my producing partners, Emmett James, asked what we were going to do next. I said, ‘I don’t really know.’ He asked, ‘What about a documentary about Stallone?’ I go, ‘What more can you do on Sylvester?’ He said, ‘No, Frank!’ I was like, ‘Oh, okay, that’s really interesting to me,” the filmmaker revealed.

“So I called Frank that night or the next day, and he was immediately in. That was a few years ago, and we then put it together with one of my other producing partners, Chris May, and we started producing the film. We then brought on our other producing partner, Dave Polemeni, and the rest is history. So the idea really came about over a couple of drinks, and here we are,” Johnson added.

The director then also delved into what the process was like of deciding which of Frank’s friends, family and film and music collaborators would make special appearances in ‘Stallone: Frank, That Is.’ “We secured about 40 or 50 interviews…Frank was intentionally not there for any of the interviews, and he asked everyone to speak freely, which they did. We traveled throughout the United States, including to California, Maryland, Pennsylvania, New York, New Jersey and Florida,” Johnson shared.

“We interviewed everyone from Sylvester, naturally, to Arnold Schwarzenegger and Billy Dee Williams; they all had unique and interesting things to say about Frank. It took us a long time to film everything, and then we had about a year-and-a-half of post-production,” the helmer revealed.

Once the interview process was complete, Johnson embraced the editing process, and being able to put the final version of the movie together. “Choosing clips and photos was easy for this film. Frank had so many photographs that he collected over the years; his collection is almost like an archive of family photos and photos of things that he has done,” he shared. “So we spent a few days at his house going through hundreds of photos, and then we chose which ones we would use, based on the segment we were working on at the time.

“as far as clips, there are a lot of movies he’s done, so we used a lot of clips from those films through the Fair Use doctrine. We had Fair Use attorneys who guided us within the legal bounds of how to construct this film under Fair Use,” the filmmaker explained. “So there are clips of Frank appearing in ‘Barfly’ and his ‘Staying Alive’ musical performance.

“That’s where the creativity can be hindered if you don’t license footage, and instead use Fair Use, because you have to keep the clips in certain guidelines. But when you use that technique, the story actually flows better because you’re not as arbitrary with the use of the footage,” Johnson added.

During the editing process, the director also diligently worked to decide which music to include in the documentary. “The film features an original score that my amazing film composer, Greg Sims, put together. He’s always great to work with and understands the sound that I’m looking for,” he revealed.

“We also used some of Frank’s songs, of course, including his number one hit, ‘Far from Over,’ from ‘Staying Alive.’…Since it’s a Frank Stallone film, and he’s a musician, we really focused on his music,” Johnson also shared. “We were also able to use music from one of his first bands from the late ’60s. Frank has such a wide variety of styles that we really worked with him to decide which songs to use in the film.”

The experience of also producing ‘Stallone: Frank, That Is’ was another aspect of the filmmaking process that both Frank and Johnson embraced throughout the production, like they previously mentioned. “My production input was getting all the talent. Also, as a songwriter, I wanted to make sure the music was right, and they did it right; they hired the right people,” the actor noted.

“The funny thing was, I was like, ‘Oh boy, I have to go over to my brother’s house and show it to him,’ which I was nervous about. I was there with his wife (Jennifer Flavin) and my nieces, and the funny thing was that they actually liked it, and I was happy about that,” Frank admitted.

Chiming in on his experience of producing, Johnson noted that the experience “is great because you’re in charge of bringing the film alive from beginning to end. So I luckily had these great producing partners who were there from inception to the end.”

In order to “balance the producing with the writing, directing and editing, you really have to check yourself…in order to make sure the film fits. Producing is where you have the power, but I was also very fortunate that I also had creative control as the director, which I always try to go for with my films. But while the filmmaker has one vision, it takes the whole team of producers to help the director find that vision. It’s a delicate, but necessary, balance,” the filmmaker emphasized.

Frank also expressed his gratitude for being able to so openly collaborate with Johnson throughout the production of the documentary. “The production was a long process; it took a few years. I basically left him alone, but I brought in my guy, David Polemeni, because we needed funds; this project was done on a shoestring budget,” he revealed.

“To Derek’s credit, he edited the film in his bedroom. This was a labor of love for him, for sure, so I didn’t get in his way,” the performer added. “When I went to see the early cut, it didn’t have any music to it, but I still enjoyed it. I was ready to cause problems over what I didn’t like, but overall, I did really like it. I became more of a participant than who the movie’s about. I think he did a really good job.”

After ‘Stallone: Frank, That Is’ was chosen to be an official selection at several different film festivals across America, including the 2020 Sundance Film Festival, where it had its World Premiere, “we landed a distributor, based on its merit,” Johnson admitted.

“It’s a honor that the movie’s being released now. It’s the highest form of flattery to have people recognize your work after all this time. I’m not the biggest star in the world, so it’s an honor that everyone is going to be able to watch the film,” Frank concluded. 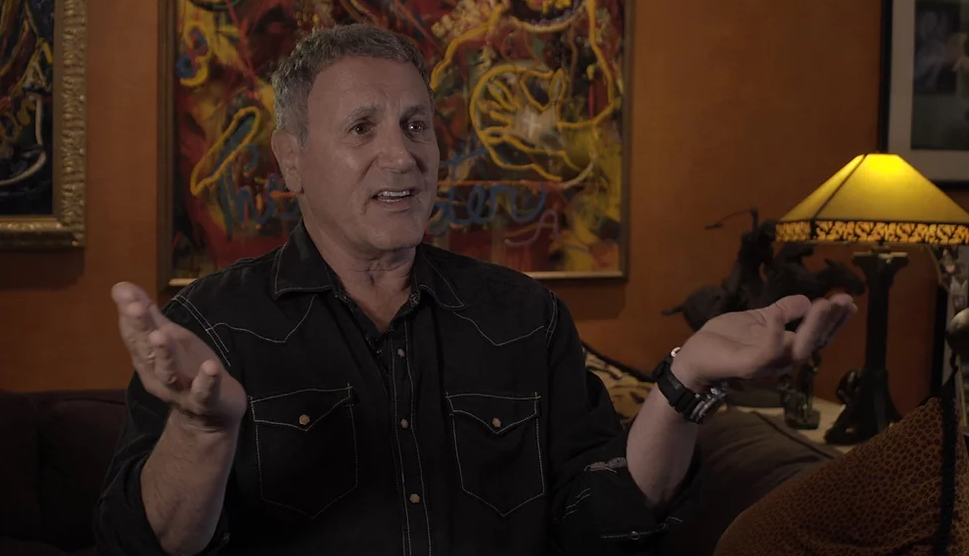