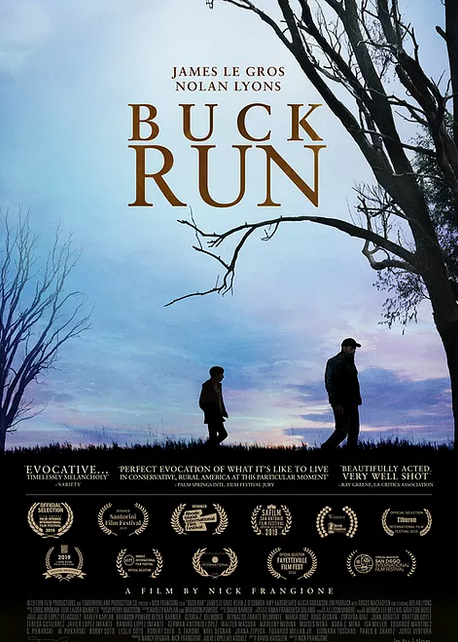 Reflecting on, and making peace with, the past can often be a cathartic experience for many people as they strive to contend with their emotional pain. That’s certainly the case for both director-producer Nick Frangione and the protagonist of his latest movie, ‘Buck Run.’ The main character in the emotionally-driven, powerful drama is in part inspired by the filmmaker’s upbringing, as he strived to reconnect with his father after his mother died when he was a teenager living in rural Pennsylvania.

The movie, which was written by David Hauslein, is now streaming on such digital platforms as Amazon, iTunes, Google Play and YouTube Movies, as well as Cable and Satellite On Demand platforms, courtesy of Freestyle Digital Media. The drama’s official release comes after it won multiple awards on the festival circuit following its premiere at the Palm Springs Film Festival in 2019.

‘Buck Run’ follows 15-year-old Shaw Templeton (Nolan Lyons) as he goes into a state of shock and denial. Despite the fact that his mother, Karen (Amy Hargreaves), is suffering from a chronic illness, the teen can’t process the fact that he finds her right after she dies in her bed. His denial over her death leads him to continue going to school and living his life as normal for the next two days, before the authorities are ultimately made aware of the situation.

As a result of Karen’s death, Shaw must move in with his estranged dad, William (James Le Gros), who’s initially hesitant to assume custody of his son, as he can barely take care of himself. But Will ultimately agrees to take care of his son-albeit reluctantly-and tells the police in their small rural Pennsylvania town that he’s now sober, which ultimately proves to be a lie. Between sleeping all day and drinking all night with his only true friend, John (Kevin J. O’Connor), he makes a meager living hunting animals in the woods.

While Shaw is barely able to connect with his antisocial father, the teenager doesn’t have anyone else to rely on, as he’s bullied at school. But the father and son eventually learn to take care of each other in their own emotionally distant ways, as they both realize that they only have each other in an isolating world that often refuses to give them any comfort or hope of success.

Frangione generously took the time recently to talk about directing and producing ‘Buck Run’ during an exclusive video interview over Zoom. Among other things, the filmmaker discussed how he became attached to direct the movie; how he choose to cast the actors, especially Le Gros and Lyons, and what the process was like of working with them to build the strained father-son dynamic; how shooting on location in Pennsylvania helped build the drama’s atmosphere, especially the relationship between William and Shaw; and what it means to him that audiences have been embracing the film since it debuted on the festival circuit.

Watch our exclusive video interview with Frangione about ‘Buck Run’ above.