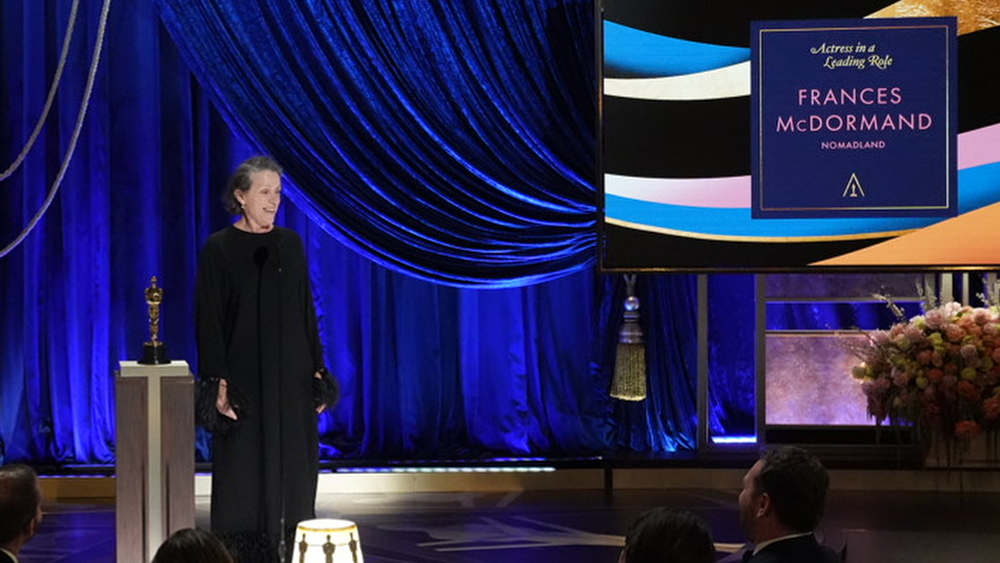 Francis McDormand won her third Best Actress Oscar for her role in ‘Nomadland’ at the 93rd Academy Awards.

Plot twists have always been a major part of the film industry, and that has certainly been the case since the start of the COVID-19 pandemic last year. During this unprecedented time of quarantine and social distancing, Hollywood has had to find new ways to resume and safely continue production on and distribution for movies since the national lockdown began last spring.

The biggest celebration of film achievement during the pandemic was held last night during the 93rd Academy Awards. The ceremony, which took place at
Los Angeles’ Union Station and Dolby Theatre, was presented by the Academy of Motion Picture Arts and Sciences (AMPAS), the Beverly Hills-based organization that has handed Oscar trophies to worthy filmmakers since its launch in 1927.

AMPAS proved its versatility and willingness to accommodate to society’s ever-changing environment during last night’s ceremony, which recognized excellence in cinematic achievement in movies that were released between January 1, 2020, and February 28, 2021. The Oscar show was originally scheduled to air on the latter date, but was ultimately postponed by two months, due to the impact of COVID-19 on the film industry.

Not only did the Academy Awards ceremony make headlines for postponing its date, but also only allowing nominated actors, actresses and crew members into the smaller venue, in accordance with social distancing mandates. But the smaller crowd and change in date and venue weren’t the only noticeable changes; there were several other changes and surprises that deserve attention. Here are our top five noteworthy surprises from last night’s Oscar show:

French screenwriter-novelist-playwright, Florian Zeller made his feature film directorial debut with the drama, ‘The Father,’ which he also co-wrote with Christopher Hampton. The duo based the script on the helmer’s Tony Award-winning 2012 play, ‘Le Père,’ but their screen adaptation wasn’t believed to be the top contender for the Oscars’ top prize. Despite the fact that Zeller and Hampton won the BAFTA Award in the same category earlier this month, the scribes’ Oscar win wasn’t a sure bet; its biggest competition came from the Academy Award’s best picture frontrunner and eventual winner, ‘Nomadland,’ which was penned by Best Director champion, Chloé Zhao.

4. Change in Traditional Presentation and Acceptance of Awards

During past Academy Awards ceremonies, clips from nominated movies were shown when each category was announced. During this year’s show, however, each category’s presenter instead relayed insight into how each nominee connected with their project and/or the current state of society.

When the winner was then announced in each category, there wasn’t a live orchestra playing them off the stage; instead, musician-up-and-coming film director, Questlove DJed the proceedings, and the winners were allowed to take their time to make their acceptance speeches, which offered them a much-need change in platform to share their feelings.

In an effort to help make the Oscar ceremony more light-hearted and relatable to younger audiences, actor-comedian, Lil Rel Howery used his comedic talents to make the audience laugh. The performer, who also served as one of the pre-show hosts earlier in the day, returned to make an appearance during the ceremony to present a round of Best Original Song trivia.

Howery asked his ‘Get Out‘ and ‘Judas and the Black Messiah’ co-star, Daniel Kaluuya, who was nominated for Academy Awards for both roles and won for the latter last night, if Donna Summer won a statue for her hit track, ‘Last Dance.’ Kaluuya’s fellow nominee, Glenn Close, quickly jumped in to say that he’s too young to know the answer.

then Howery asked Close, who was nominated in the Best Supporting Actress category, whether she knew about the history of ‘Da Butt,’ which is a single that was released in 1988 from the soundtrack to Spike Lee’s musical comedy-drama, ‘School Daze.’ Close noted that the tune wasn’t nominated for an Oscar, and then got up from her table and started dancing to the song when Questlove began playing it.

2. Frances McDormand Wins the Best Actress Oscar for Her Role in ‘Nomadland’

Two of the most discussed categories during last night’s Academy Award ceremony were the Best Actress and Best Actor races; they were so anticipated that AMPAS changed the order in which they were presented during the ceremony. The Best Picture category, which is traditionally the last award to be announced, was announced earlier in the ceremony, and the two acting categories were instead announced last.

Frances McDormand, who was nominated for her fifth acting Oscar for her portrayal of Fern in the drama, ‘Nomadland,’ won the Best Actress trophy, which earned her her third statue in the category. Her win for the film was an uncertainty, since Andra Day won in the category for her performance in ‘The United States vs. Billie Holiday’ at the Golden Globes, Viola Davis was honored with the SAG Award for ‘Ma Rainey’s Black Bottom’ and Carey Mulligan brought home the Critics’ Choice and Spirit Awards for her portrayal in ‘Promising Young Woman.’

1. Anthony Hopkins Wins the Best Actor Academy Award for His Role in ‘The Father’

The Best Actor category was the final one to be presented during the Oscar ceremony, taking over the slot that’s usually held by the Best Picture category. It’s believed that the producers of the telecast made the unexpected decision because they thought that the late Chadwick Boseman would be chosen to posthumously win the statue for his last acting role in ‘Ma Rainey’s Black Bottom,’ for which he won the Golden Globe, SAG and Critics’ Choice Awards.

However, Anthony Hopkins was instead honored with his second Best Actor Academy Award, for his role in ‘The Father,’ after he won his first trophy for his role in ‘The Silence of the Lambs.’ The actor, who has also received four other Oscar acting nominations throughout his career, also won the BAFTA Award for his portrayal of the title character in ‘The Father.’ However, Boseman’s acclaimed portrayal won him both the Golden Globe and the SAG Award, making the Academy Award Best Actor race one of the tightest and most unpredictable during this year’s awards season.