Provocatively prompting the need within both individuals and society as a whole to reexamine the way people treat others, especially when it comes to gender equality, isn’t always an easy feat in films, especially ones that aren’t based on true stories. But the timely new drama, ‘Promising Young Woman,’ compellingly provokes that urgency in audiences through its strong-willed and determined title character.

While she can be viewed as a unique anti-hero at first glance, the eponymous main character ultimately proves to be a distinctly diverse and layered protagonist who knows what she wants to accomplish. She isn’t afraid to pursue her dreams of changing cultural views, no matter how primitive they initially may appear.

Focus Features is set to distribute the movie in theaters this Friday, in time for the Christmas holiday weekend. The official release comes after ‘Promising Young Woman’ had its world premiere at the Sundance Film Festival in January.

The black comedy marks the feature film writing, directorial and producing debuts of Emerald Fennell, who first made a name for herself when she served as the show-runner for the second season of the BBC America television series, ‘Killing Eve.’ ‘Promising Young Woman’ features an ensemble cast that’s led by Carey Mulligan, who has garnered critical acclaim for her performance in the title role. The thriller’s supporting cast includes Christopher Mintz-Plasse, Bo Burnham, Alison Brie, Connie Britton, Adam Brody, Jennifer Coolidge, Laverne Cox, Max Greenfield, Chris Lowell and Molly Shannon.

‘Promising Young Woman’ follows Cassie (Mulligan), a 30-year-old coffee shop worker who everyone used to say had the potential to do great things with her life. Her seemingly promising future came to end, however, after a mysterious event occurred while she was in medical school seven years earlier. The situation abruptly led her to stop her studies and derailed her professional aspirations of becoming a doctor.

Even several years after she stopped pursuing her dream, nothing in Cassie’s life is what it appears to be, as she’s living a secret double life by night. After she has an unexpected encounter with one of her former classmates from medical school, Ryan (Burnham), at the coffee shop where she works, Cassie starts to believe that she finally has a chance to right the wrongs of the past.

Mintz-Plasse generously took the time recently to talk about starring in ‘Promising Young Woman’ recently during an exclusive interview over the phone. Among other things, the actor discussed that his character of Neil only appears in one scene in the drama, in which he’s targeted by Cassie in an effort to change his crude behavior towards women. But he felt their brief interaction helps highlight the story’s message of the need to emphasize gender equality. He also noted that he enjoyed collaborating with both Fennell and Mulligan on his scene in the movie, in part because both women support Cassie’s need to change society’s perceptions on men who purposely target vulnerable women.

The conversation began with Mintz-Plasse explaining what drew him to play Neil in the black comedy-drama, and how he became attached to the film. “I was sent the script about two or two-and-a-half years ago. It was one of those rare scripts that you can’t guess what’s going to happen next, and can’t put it down,” he admitted. “But it was also exciting.

“Then Emerald started taking meetings with actors. I don’t think they were really auditions, as I just went in, and we talked about our dating lives for 45 minutes. About a week or two later, I got a call, and I was cast as Neil in the one scene,” the performer shared.

Mintz-Plasse added with a laugh, “I guess she saw something in me that made her think that I could play a perverted dude, so I guess it was a complement and insult at the same time! But I was just so excited to work with Emerald-she has a great catalogue from working on ‘Killing Eve.'”

The actor also gushed about his on-screen scene partner. He stated that when he found out that Mulligan was attached to play Cassie in ‘Promising Young Woman,’ he was excited to have the chance to work with her, as he thinks “she’s one of the best actresses around.”

Following up on the process of collaborating with Fennell as the writer, director and producer on the thriller, Mintz-Plasse enjoyed the experience of working with her on developing his scene. “I came in at the end of the shoot, on about day 20 of 23 days, so (everyone else on the cast and crew) were already in the flow on set. There were a few things she changed (in the scene), but there was a moment where I knew she knew exactly what she was going for,” he revealed.

“My character’s very drunk and doing lines of blow. So I wanted to unbutton his shirt and make him red and sweaty in the face, because that’s how people are at 2 or 3 in the morning” after a night of partying, the performer pointed out.

“But Emerald said, ‘No, we have to keep him looking clean and nice.’ I understood in that moment that she wants to make it so this guy doesn’t have any excuses the following morning for his actions. We can’t let these guys off the hook by saying, ‘Oh, he was too drunk, or it was the drugs,'” Mintz-Plasse divulged. “We had to make it so that these seemingly nice men are always out there taking advantage of these women.”

Following up on the fact that Neil is just one of the men who Cassie interacts with in a bar that doesn’t believe that he’s doing anything wrong, the actor thinks that his character will change his toxic method of persuasion with women, at least to some degree. “I really like that Neil is an ass**** from the beginning (of the scene). He snorts a line and can’t stop talking about himself…and is a sleazy dude. So it was cool to play a dirtbag from minute one,” he shared.

“I think that Neil was shaken up at the end of the scene, for sure. It’s sad to say, thought, that these women (who are targeted) are affect for the rest of their lives, but I think that he may have only been affected for a month or two,” Mintz-Plasse admitted. “I think he would continue going out and being a d****bag, but would stop forcing himself on women who are half asleep. I think it definitely shook him enough.

“But I think Adam Brody‘s character (of Jerry) in the first scene (of the film) is more of a 180 than my character, which is a great lead off for the movie. You think (Jerry’s) going to be this good guy who’s going to take care of (Cassie), but ends up taking advantage of her,” the performer added.

Mintz-Plasse also following up on his experience of collaborating with Mulligan to create the dynamic between Neil and Cassie in their scene. “Like I said earlier, she’s one of the best actresses around. I hope that this movie gets her some awards. It was great to work with her and see her learn lines on the day, and then going and absolutely crushing the scene.

“I think the dynamic of the scene is very interesting because during the first half of it, I’m kind of acting against nobody because (Cassie’s) half asleep. So I was delivering dialogue to her, but Neil was really talking to himself, because he thinks he sounds suave and cool. So it was really me opposite myself,” the actor shared.

“When (Cassie) makes that switch (and reveals that she isn’t drunk), Neil really shrinks and becomes the coward that he is,” Mintz-Plasse shared. “She’s really ripping into him, but he’s barely talking at that point. There really wasn’t much of a flow that we found, because we were basically doing two separate scenes within one scene.”

While Cassie is trying to prove to Neil, as well as the rest of the men she targets, that they have to reevaluate the way they treat women, there are also moments of dark comedy throughout the plotline of ‘Promising Young Woman.’ The performer delved into what the experience of interweaving those more humorous moments into his scene with Mulligan.

“I think part of the reason why (Eearald) cast me was because of the comedy, and that’s what I’m known for, and she figured I’d bring some of that into the scene,” the ‘Superbad’ star noted. “The script was already hilarious, but it was a very strategic casting on her end to cast a bunch of comedic actors.

While the movie features those moments of comedy in its general storyline, in Mintz-Plasse’s scene, the overall situation is serious. Neil initially believes that he’s in charge of the dynamic between himself and Cassie, as he doesn’t know that she isn’t really drunk. But she soon reveals her true intentions, and is the one who’s truly in charge. The performer noted that he believes that including that shift in power is truly important in showing the effects of gender inequality in these types of social situations, and people can learn from Cassie’s interaction with the men she targets.

“I hope people walk away (from the film) with that mindset. When I read the script, I really loved that it not only shows that these men are awful people, but women can also be complicit in this and turn a blind eye if it’s their son, boyfriend or someone they know who’s involved in it, and don’t want to stand up for what’s right. But in Cassie’s case, she fights back against the men who have hurt her. So the script does a great job of showing that it can go either way,” Mintz-Plasse shared.

While ‘Promising Young Woman’ had its world premiere at the Sundance Film Festival at the beginning of this year (before current COVID-19 social distancing protocols were put into place), the actor wasn’t able to attend the festival screenings in person in Utah. But he “heard it was the talk of Sundance, which is really exciting.

“One of my best friends was actually able to go to the premiere, and his girlfriend loved the movie and thought it was hilarious. But he walked out and said it was one of the heaviest movies he has ever seen,” Mintz-Plasse revealed. “It makes me laugh that there are going to be a lot of men who are going to walk out thinking about their younger selves, or if they’re single, how they’re going to treat people moving forward. It’s pretty brilliant in that respect.”

The performer also admitted that he thinks “it’s rare-and exciting-for a movie to spark this kind of conversation. Being able to illicit a change in people’s behavior and how they interact with people proves that this is great art. It’s very timely, and great that it’s resonating with people.”

With the drama being released in theaters on Christmas Day, Mintz-Plasse noted that he knows “that it’s coming out during a pretty insane time with everything that’s going on with the virus. I think it would be really great if people can (go see it in theaters) safely by socially distance while they’re there, or going to a drive-in. There’s nothing like seeing a movie like this on a big screen, like it’s meant to be seen. I hope people see it multiple times, and have conversations about this subject with people they know,” he concluded. 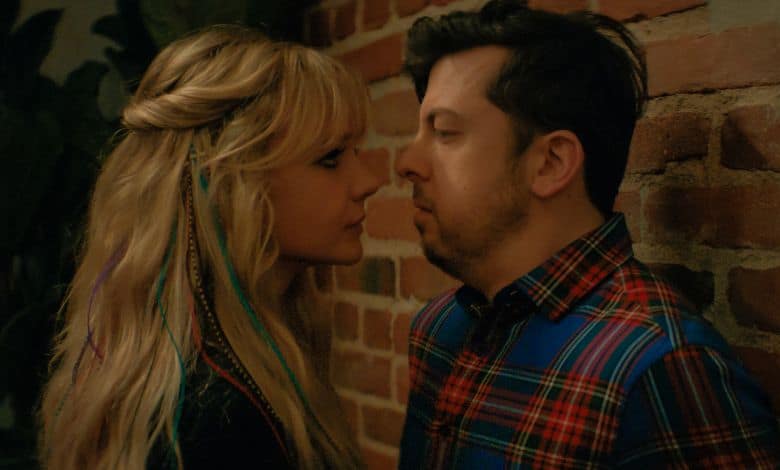