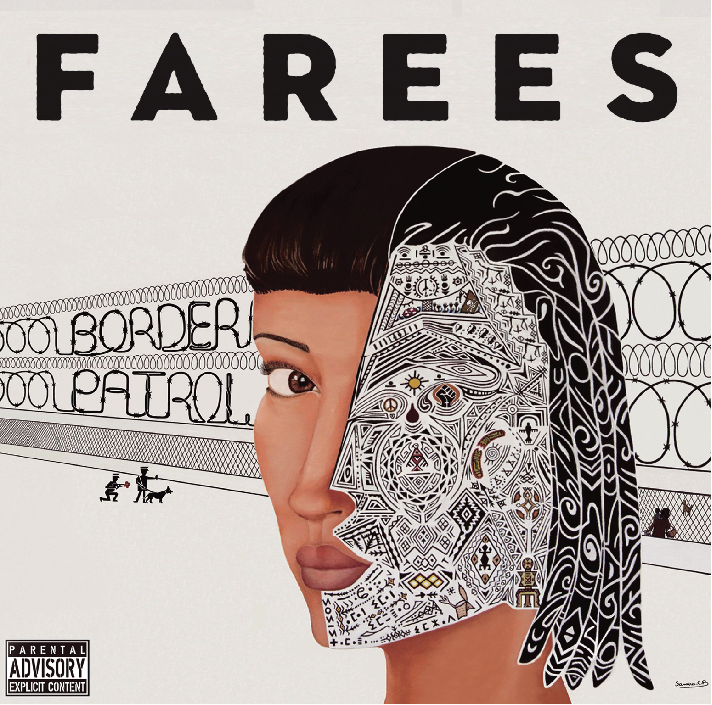 Striving to save humanity, both on personal and political levels, is a powerful pilgrimage for activists around the world in modern society. Italy-based folk funk singer-songwriter, Farees is fearlessly sharing his social views about how cultures around the world need to overcome racism on his latest album, ‘Border Patrol,’ which is now available on all platforms.

The epic 17-track concept record from Farees, who also served as a producer, fuses together stellar heavy blues, alternative rock and African sounds to create a musical manifesto that proclaims that everyone needs to stop dehumanizing themselves and the people around them. Through both sung and spoken word tunes that are reminiscent of such musicians as Ben Harper, Bob Marley and Jimi Hendrix, the contemporary poet has crafted a nuanced LP that speaks volumes about the injustices that are driving modern culture.

Farees’s music is inspired his experiences of being multiracial and having grown up in several countries and continents, as his mother is of Tuareg ancestry, and his father is of Italian and German heritage. Farees, who has become recognized as an influential artist in Africa, is rightfully also garnering recognition in North America and Europe for having a different perspective on society, as he can embody different cultures and worldviews. The singer isn’t afraid to call for an end to the fact that people assign others with different identities based on their physical appearance, even though their own internal personality isn’t necessarily aligned with their assigned character.

The musician courageously infuses his own personal philosophies and experiences into ‘Border Patrol’ from start to finish, beginning with its daring second entry, ‘I’m Privileged.’ The song delves into the spoken word style that he’s become renowned for throughout his career, as it’s reminiscent of some of the best protest traditions that have driven music over the past half-a-century. Having been detained without any apparent reason in both the U.S. and Italy led Farees to create new lyrics for tracks like this one, which highlight his increased interest in activism.

‘I’m Privileged,’ which features stellar percussion from Idiki Camara, as well as a wailing electric guitar and energetic bass line, is a psychedelic blues-infused tune that narrates the artist’s confrontations with intolerance. While he recounts his harrowing stories of being a target of racism and discrimination, he declares that he still feels privileged.

Another standout entry on the singer’s new album is its eight song, its spoken word title single. ‘Border Patrol,’ which features a spoken introduction by Dimitri Skull Caraballo, and Sidiki Camara on percussion, is a captivating, politically-driven track that creatively fuses many genres together to help emphasize Farees’ message of eradicating discrimination. Backed by a stunning blend of hip-hop and folk instrumentals, the musician emotionally declares that he wants his freedom, without being tied to the police controlling him.

One of the best tunes on the ‘Border Patrol’ record is its 15th entry, the folk-blues-inspired ‘Split Second.’ The musician points out that many people don’t know how it feels when they compare the sins of the minority of a culture to the actions of the entire society. The song has commercial appeal as Farees asks to be judged for his own actions, and not the deeds of his collective community in soulful vocals that are driven by stellar, flowing guitar riffs.

‘Split Second’ then transitions into ‘Border Patrol’s penultimate entry, ‘Empire Man (Slight Return).’ The track features Samira Clady, the president of Farees’ label, REZ’ARTS Prod, giving a speech that’s extracted from the collection of poems, ‘Regard Aquarel,’ by Fatiha Berezak-Benrezig. Driven by gritty, colossal electric guitar riffs that are reminiscent of the British rock band, Dire Straits, Farees croons about the repercussions of spreading hate and lies, as he ponders the overall way that people contend with judgment.

The last entry on the artist’s latest LP is the instrumental tune, ‘Pegu.’ The song is driven by a sense of melancholy in its soulful guitar strumming, as Farees reflects on the spiritual journey he has taken while endearing social and racial injustices. Also fueled by a sense of peace, the track is the perfect ending to the album, as the singer creates a secure environment in which people of all races transcend all words to create a more meaningful connection.

‘Border Patrol’ is a powerful, meaningful and personal record, as Farees has crafted tunes that fearlessly discuss the issues and injustices people are currently facing, no matter what their ethnicity is, or what they believe in. The singer-songwriter proves that he isn’t afraid to use his platform as a musician to speak his mind, as he continues to try to make social and political change. With his unique style of blending his heartfelt lyrics, vocals and instrumentals in such in such diverse genres as African, spoken word, electric rock, blues and folk, he’s put together an inspirational collection of tracks that are essential listening for all contemporary listeners.