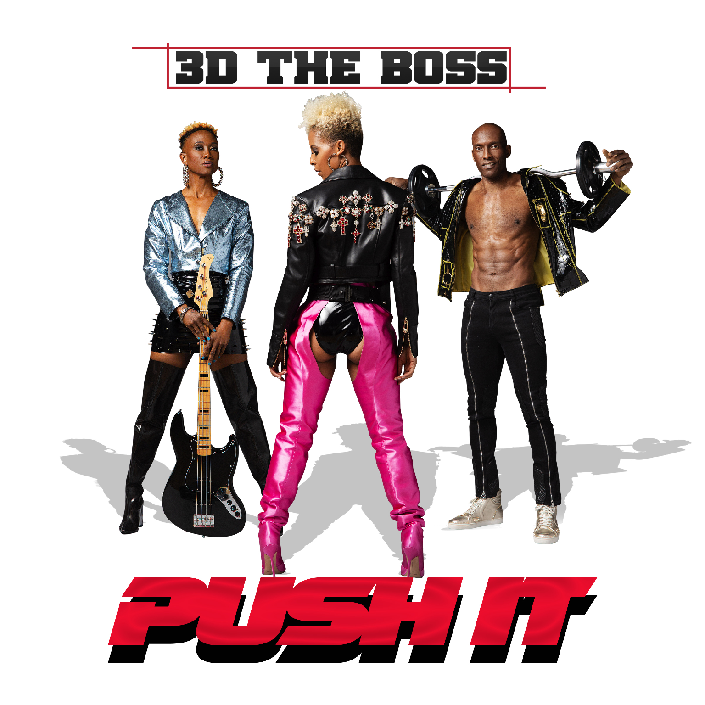 Meaningful, energetic pop music is being brought to a higher level with the recent release of R&B-funk trio 3D The Boss’ 10-track debut album, ‘Push It.’ The seasoned musicians of the Atlanta-based band, who are fronted by lead singer-keyboardist, C Lei Boss Lady, have effortlessly combined their ’70’s and ’80’s R&B-funk inspirations with modern pop and electro elements to create their compelling signature sound, which they’ve dubbed cardio pop.

The distinct, unique sub-genre is engaging and encouraging, as the group’s members set supportive, motivational lyrics against upbeat tempos and instrumentals throughout its first record, which takes inspiration from such artists as Beyoncé, Ciara, Earth Wind & Fire, Black Eyed Peas and Bruno Mars. ‘Push It’s spirited entries are infused with significant meaning, as C Lei and her fellow musicians encourage their listener to lead a healthy lifestyle. The trio also motivate their fans to do whatever it takes to care for themselves and build their self-confidence in powerful anthems that also feature radiant vocals fueled by a distinctive groove.

3D The Boss’ initial album begins with the dynamic, powerful entry, ‘Go,’ which is driven by a dazzling funk rhythm, powerful ’80’s-inspired rock and funk bassline and fiery drums. C Lei’s smooth, vibrant vocals provide the lyrics with a light, resilient energy that sets up the record’s workout vibe. Set against a pulsating beat, she croons about how her femininity is taking over as she strives to make a better life for herself, which makes the song the perfect callback to energetic ’80’s party pop tracks.

‘Go’ then delves into ‘Push It’s sophomore tune, ‘BBGG,’ which stands for ‘Big Boys Good Girls.’ The R&B-fueled entry features infectious vocals and alluring, tantalizing lyrics that perfectly blend together to create a fun, invigorating journey. Supported by a captivating jazz piano, C Lei croons about the importance of women proclaiming their independence, especially when they come to realize and accept when their romantic relationship is no longer beneficial to their mental health and self-worth. ‘BBGG’ is the perfect anthem that supports the importance of female empowerment.

Another noteworthy song on 3D The Boss’ debut album is its title track. ‘Push It’ proves the musicians’ versatility as R&B artists’ equally radiant harmonies, blazing rhythm, smooth bassline and pulsating beat. In sensuous vocals that are reminiscent of the voices of Madonna and the members of En Vogue from the early ’90s, C Lei croons about the love she has for the man in her life. Her hypnotic vocals, which are supported by the trio’s signature dynamic rhythm and instrumentals, makes the eponymous track the perfect contender to become the record’s next single.

The band’s first record begins to wind down with its penultimate tune, ‘Heaven and Paradise.’ The entry, which features a ’70s folk vibe on the electric guitar and keyboard, features C Lei crooning about how she feels like she’s finally in the title locations, now that she has found a potential love match. She admits that she’s mesmerized by the man she’s connected with, especially since she never thought she’d find such a powerful connection.

The final song on ‘Push It’ is its best one, ‘Still Standing.’ The track powerfully showcases the strength in the album’s overall narrative story and C Lei’s vocal range. Interweaving spoken words with singing vocals, the musician reminds her listeners how important it is for them to understand their self-worth, especially in a relationship where the other person doesn’t respect them enough to keep the promises they made to them. The singer admits that people can find strength when they decide to move on from a relationship that’s no longer benefiting them, as they need to take a stand for themselves and their self-worth.

3D The Boss is making a name for itself by addressing issues of unhealthy self-image, unconscious messaging and imbalanced role-models on the 10 songs that make up its new debut record, ‘Push It.’ Led by C Lei, the trio delivers an equally energetic and meaningful experience that’s rooted deep in meaning. The musicians’ style is sure to gain notoriety through it emphasis of the importance of leading a balanced life that promotes self-love, purposeful living and passionate pursuits.

The band’s seasoned musicians have effortlessly combined their ’70’s and ’80’s R&B-funk inspirations with modern pop and electro elements to create their compelling signature sound of cardio pop. The distinct, unique sub-genre is engaging and encouraging, as the group’s members set supportive, motivational lyrics against upbeat tempos and instrumentals throughout its first album.

The record’s spirited entries are infused with significant meaning, as C Lei and her fellow musicians encourage their listener to lead a healthy lifestyle. The trio also motivate their listeners to do whatever it takes to care for themselves and build their self-confidence in powerful anthems that feature radiant vocals fueled by a distinctive groove. ‘Push It’ is the rare debut album that instantly highlights the musicians’ talents and proves their undeniable staying power.