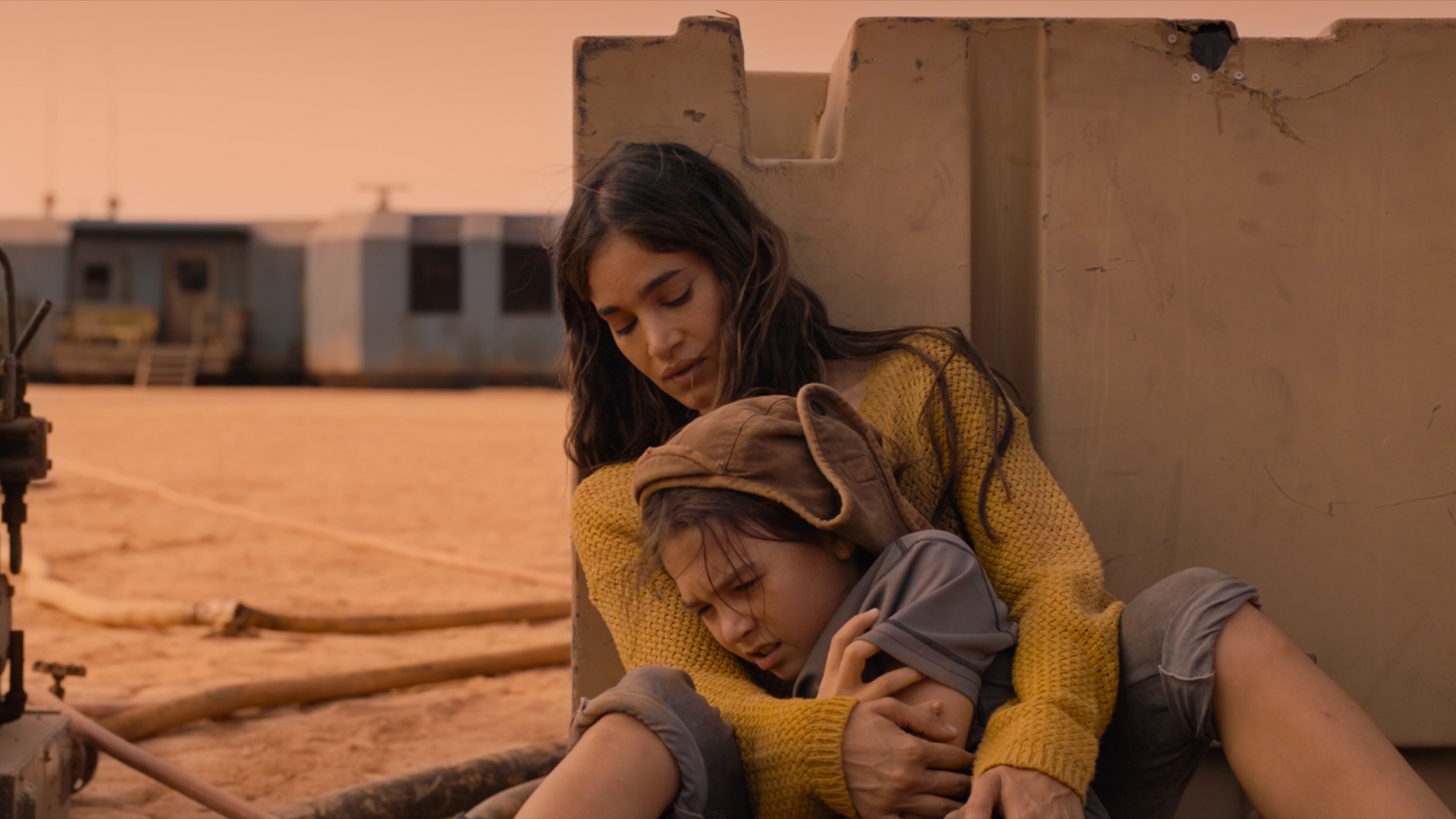 Our planet is dying, and though some protest that science is all one big conspiracy theory, global warming and other environmental catastrophes all but assure that Earth will not be habitable for the human race for long. Science fiction has, of course, known this for years, and exploration into deep space in search of a new home for civilization has long been a fixture of the genre. The colonization of new worlds is often done by a small group either to test its viability or because of natural selection that thins out a landing party, where those who survive are likely to meet unexpected threats, be they alien or all too recognizably human.

Remmy (Brooklynn Prince) is nine years old and lives on Mars with her parents Ilsa (Sofia Boutella) and Reza (Jonny Lee Miller). She follows strict protocols and remains within the confines of their quiet settlement. When their careful existence is disrupted by the arrival of marauders intent on attaining some of what this family has made for themselves, Remmy’s life changes forever. The presence of Jerry (Ismael Cruz Cordova), a man who has spent most of his years facing the harsh terrain of the planet, keeps Remmy on edge as she grows into a young adult (Nell Tiger Free).

This concept is not a new one, and each subset of the story has been explored in previous films and literature. Remmy has only ever known the place where she lives, and therefore she doesn’t have the same context that her parents do about what came before and the bustling, materialistic society that her parents might have known. She learns instead from watching how they act and seeing how they respond to the emergence of a threat like the one that Jerry poses upon his arrival. Her models for behavior are minimal but extremely influential, and deprogramming her mistrust of others is not an easy task.

This film gets off to an involving start with an intense and frightening attack on the settlement that occurs without warning, and the tension that follows is far more contemplative and of a slow-burn nature. In part because these are people who are forging the building blocks of a new peoplehood and unaware of any reinforcements coming to relieve them, there is no urgency or rush to get anywhere, and that’s definitely felt in the film. A runtime of 103 minutes isn’t excessive, but there’s not quite enough captivating content to fill that entire duration.

What does work well here are the performances. Prince is an extraordinary talent who broke through with an unforgettable turn in The Florida Project at only six years old and who has continued to demonstrate a knack for serious acting in the Apple TV+ series Home Before Dark. Here, she is just as curious and precocious, anchoring the film until Free dependably takes over. Boutella, Miller, and Cordova are also strong, but, just as their characters are merely passing the torch from their generation to hers, so too do they defer to the astonishing Prince, who has years of excellent work ahead of her.

Wyatt Rockefeller’s directorial debut is a perfectly competent look at a way that humankind will likely need to move forward in its near future, embedding the notions of self-assuredness and ego that will surely impede progress. Sci-fi fans will find a comfortable and recognizable canvas with decent visuals and effects, one that doesn’t serve to inject new energy into an oft-explored narrative but serves as a moderately engaging and expected visit to a territory frequently imagined and brought to life from the perspective of humanity’s future.