A deliciously-premised action-comedy that consistently flirts with blossoming into something a lot more special and enduring, without ever quite fully doing so, Free Guy is an unabashed, all-caps movie — a fun-time slice of entertainment that cranks the charm and energy levels up to high, and hopes, with some success, that the sheer effervescence of its packaging will overwhelm an audience’s senses and drown out the feeling that, well, there could’ve been just a bit more there there.

Ryan Reynolds stars as Guy, a bank teller who lives a simple life with his goldfish, quotidian routine, and his best friend Buddy (Lil Rel Howery), who works as a security guard at the same bank which has a very high rate of robbery. Together, they marvel at “the sunglasses people,” the swaggering, impossibly fashionable alpha-types who seem to drive all of life’s action. The reason for that is that Guy, like many around him, is actually a non-player character, or NPC, in Free City, a popular online multiplayer game which indulges a lot of the same violent impulses as the Grand Theft Auto series.

When Guy finally works up the courage to talk to Molotov Girl (Jodie Comer), upon whom he has nursed a crush, and later takes other decisive and new actions, it creates a glitch in the system, allowing him to earn cash and “level up” simply through acts of kindness. Understandably, this creates no small amount of newsworthy confusion in the real world. There, Molotov Girl is Millie, who along with Keys (Joe Keery) created a more passive, viewer-oriented videogame which was bought out and shelved by Antoine (Taika Waititi), a colorful game developer who stands ready to leverage Free City‘s massive popularity into even more lucre with an about-to-launch sequel. Guy’s ability to learn by degrees, absorbing the world around him into his core programming personality  and “mission,” reflects a key component of Keys and Millie’s proprietary AI software. What begins as Millie’s solo campaign of capitalistic takedown dutifully morphs into something even bigger, incorporating a countdown-clock element with consequences for Guy and all of Free City‘s other inhabitants.

It’s obvious that considerable effort went into “plussing” some of the comedic scenarios within Free Guy, particularly in its final act. (Spoiler: cameos are involved, plus an adulterated new character ported over from the game’s intended sequel.) And the finished product undeniably benefitted from those endeavors. It’s less clear, though, that similar time and energy was expended toward building out the themes which fully plug into the big philosophical ideas at the core of the movie. And that’s kind of a bummer, honestly. If too many Hollywood genre movies set their sights simply on “good enough,” that’s not Free Guy, which reliably delivers an above-average entertainment experience, at least. But there’s a steady background thrum one hears and feels while watching the movie, of thorny ethical complications and notions of self-actualization — all no doubt deemed too esoteric, though they would actually elevate it further — being simplified, and shoved into the smallest possible containers.

Free Guy originated as a spec script from Matt Lieberman, landing on the 2016 Black List of the most-liked, yet-to-be-produced screenplays, and received a co-credited re-working from Zak Penn, whose filmography leans heavily into the superhero genre sandbox. It’s too harsh by at least half (and probably more than that) to say Free Guy serves up a Pixels-style rendition of a concept that could, with a little more dialed-in intellectual rigor, be more The Truman Show. The movie notches a bit of social commentary and gets in some thoughtful digs against the sheer emptiness of violence-as-entertainment. But those moments Free Guy steps up to the brink of something truly emotional, it generally blinks, and turns away. Reynolds absolutely has both the dramatic chops and fine-tined, smartly modulated sense of timing necessary to yo-yo back and forth between high-concept comedy and more grounded, character-based tragedy; one wishes Levy, and the script, had simply trusted in him a bit more.

To that point, though, the movie is assisted immeasurably in its generally appealing casting. Reynolds is a perfect anchor for this type of material, getting to hitch his trademark expressiveness to a sense of bewilderment which serves as a great incubator for audience sympathy and investment, even if it’s mostly just a roller-coaster. Comer brings a pinch of the same off-kilter sensibility so often on display in Killing Eve, while carving out a character still believably grounded in idealism. Keery, meanwhile, breathes a lot of life and multi-dimensionality into a character who could simply be named “Friend-Zone Guy,” and Utkarsh Ambudkar and Howery deliver solid supporting laughs. The sole exception to all this, unfortunately, is Waititi, who is clearly given free range by Levy, and takes that as his cue to dominate every scene. The target at which he’s aiming is an emotionally-abusive narcissistic super-capitalist who sucks up all the oxygen in every room he enters, but it’s an awful performance which is all, and only, about willful showiness. It’s utterly exhausting, and it honestly feels like a holdover from a far lesser film.

For mainstream audiences, Free Guy delivers a fresh, funny ride — and one blissfully untethered to existent IP, it must be noted, a rarity in these times. If there’s a slight twinge of wistfulness for some viewers about what else was out there, and what could have been, well… maybe we’re not so different from Guy after all. 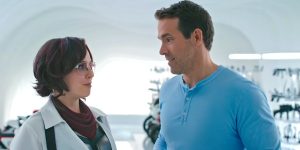