John and the Hole Movie Review

Title: John and the Hole

There is an abundance of weird, discordant energy coursing through the minds and bodies of adolescents, perhaps especially males, even before the hormonal kick of puberty takes over. One needn’t be a “bad kid,” or either from or in difficult circumstances, to necessarily act out in misplaced or odd ways; before moral reasoning and judgment centers harden, the reality is that there are certain times when the inscrutable actions of youngsters can simply be best explained by way of a neon sign that could be permanently affixed above their head to describe the present state of their brain: “under construction.”

Few films attempt to assay this curious state — let alone capture it — with quite the studied ambitiousness as John and the Hole, an atmospheric coming-of-age drama that represents the auspicious feature directorial debut of Spanish-born filmmaker Pascual Sisto. Adapted by Argentine screenwriter Nicolás Giacobone — Alejandro Iñárritu’s collaborator on Birdman or (The Unexpected Virtue of Ignorance) and The Revenant — from his own short story El Pozo, Sisto’s film mines its deliciously strange yet simple premise for profound unease, resulting in a divisive work that a good many viewers, perhaps not wanting to sit with some of its uncomfortable latent truths, will reflexively dismiss as simply “weird.”

The story centers on John (Charlie Shotwell), a quiet kid who lives in a tucked-away house in a neighborhood which abuts the woods. In that forest exists a deep pit of poured concrete — the remnants of a once-planned bomb shelter, never finished. With seemingly no provocation, one night John drugs his parents (Michael C. Hall and Jennifer Ehle) and older sister Laurie (Taissa Farmiga), and places them in this hole. Occasionally taking them food, water, and blankets, John then simply goes about his regular activities — playing videogames, hanging out with a friend, going to tennis practice — while his family, stuck with no way to get out, spends time trying to dissect the root cause of his action, with his mother recalling John’s seeming dissatisfaction with her answer to his plaintive query, “When do you stop feeling like a kid?”

The movie is marked by a few moments of creepiness, as when the prepubescent John practices effectively mimicking the voices of both of his parents, in preparation of phone calls which cover his tracks. There is a moment or two, as well, of unusually constructed tension, as when John and his friend engage in a dangerous adolescent game. There’s also the requisite secondary adult figure, a friend of John’s mother, who starts to wonder what is really going on, and test some of the pressure points of John’s stories. But for the most part it’s surprising how little John and the Hole, which enjoyed its world premiere at the 2021 Sundance Film Festival, is really plot-driven, or concerned with escalating anxiousness or anticipation. The movie is a character study wrapped in the false guise of a ticking-clock thriller.

Abetted by an evocative, high-ceilinged modular synth score from composer Caterina Barbieri that taps into rich feelings of youthful confusion, Sisto and editor Sara Shaw create a film of naturally undulating rhythms — one in which small scenes of quietude seem to both contain and build to larger emotional truths. This isn’t mere “mood” for mood’s sake, a point underscored further by a parallel narrative device which lends allegorical weight to the main story. John and the Hole is instead an examination of identity, and rumination on emerging personality. In exploring the confusing dividing line between adulthood and adolescence, Sisto and his well-focused, on-the-same-page collaborators craft an engaging, off-kilter fairytale which provokes rather than answers questions. 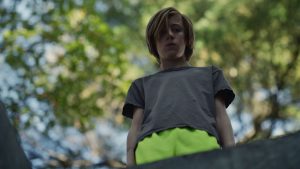