The Water Man, David Oyelowo’s feature film directorial debut, is not, it turns out, the British-born actor’s long-gestating passion project sequel to 1998’s Adam Sandler comedy The Waterboy, in which the socially inept Bobby Boucher has become a grizzled football mentor figure struggling with post-concussive symptoms in a world in which myriad advances to basic hydration have provided a confusing array of alternatives in turn fueling a fundamental crisis of identity. 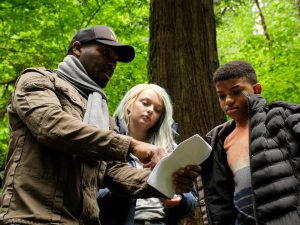 This fact left me, perhaps somewhat understandably, initially disappointed. But for what it wants to be, the light fantasy drama The Water Man is just fine — nothing more, nothing less. The target at which Oyelowo is aiming, as he makes clear in the movie’s new Blu-ray bonus features, are family-friendly adventures of yesteryear like The Goonies, Gremlins, and Stand By Me. And from its opening scene, in which composer Peter Baert’s score evokes memories of Moby’s delicate “Porcelain,” it’s clear what territory viewers are in, and what terrain they’ll be traveling.

Set in the small town of Pine Mills, the story centers on young Gunner Boone (Lonnie Chavis), a comics-obsessed kid and aspiring artist who sets off on a journey to save his terminally ill mother Mary (Rosario Dawson), teaming up with local misfit Jo (Amiah Miller). The object of their quest? The titular mythic figure who, according to local legend, possesses the secret to immortality. After a reclusive author (Alfred Molina) provides Gunner with a much-needed map, off into the woods go he and Jo, with Gunner’s father Amos (Oyelowo) eventually giving chase, along with the local sheriff (Maria Bello). Nothing here is particularly groundbreaking, or even necessarily original, but Emma Needell’s script checks the boxes of both coming-of-age and hero’s journey dramas, all while sprinkling in some elements of grander fantasy. Chavis, quite good, proves an enormously sympathetic and appealing guide, and the motivating impulse behind his character’s journey — Gunner’s mother’s illness, and his struggle to come to terms with it — will resonate with those seeking entertainment which they can both watch and then discuss with their children.

The Blu-ray presentation of The Water Man, in 2.39:1 widescreen with a Dolby digital 5.1 audio track, comes with a nice assortment of supplemental features. There’s a nine-minute making-of featurette and a 10-minute behind-the-scenes featurette which focuses more exclusively on the animation interwoven into the movie, the latter including interviews with animation chief Chel White, animation producer Rebecca Cedeno Wells, and others. Oyelowo proves a fine and warm guide to those seeking production-specific anecdotes on his feature audio commentary track. The most substantive bonus feature, though, might be the 27-minute Q&A Zoom session from the movie’s virtual premiere at last year’s Toronto Film Festival. In this very conversational offering, Needell talks about the inspiration for her Black List-feted script coming from a childhood growing up on a solar-powered ranch, without TV; Oyelowo, meanwhile, talks about very much wanting to make a movie for his four kids — something with age-appropriate thrills and scares, but also a deeper meaning — and getting into a bidding war with a major Hollywood studio in securing the rights to the material.

Many documentaries, in the current cultural moment, seem to have traded their soul or at least their good sense for extended episodic deals on streaming services. This means financial windfalls, one presumes, but a bloated and often repetitive editing sensibility which circles back and hammers home the same theme or point or even basic story, over and over again. Lost Course, a work of embedded nonfiction enterprise, is proudly out of step with this convention, and perhaps at least a little because of this manages to overcome its three-hour running time, delivering a work of unique insight for those with an interest in geopolitical affairs.

Beginning in 2011, director Jill Li moved to the rural village of Wukan, in southern China, and turned on a camera. There, she would bear witness to an unprecedented experiment in local democracy, where angry villagers decided to fight back against corrupt officials who had illegally seized and sold their farmland. Li’s documentary is divided into two halves: the first, “Protests,” depicts the grassroots activities of Wukan residents as they work to reverse the land sales and gain a substantial measure of control over their local territory. We see how the villagers themselves learn to organize elections, vote (even if they’re illiterate), form alliances, and win support. Part two, “After Protests,” confronts the collapse of idealism as the newly elected village government finds itself in short order mired in the same type of dishonest and unprincipled dealings they had originally condemned.

Lost Course is Li’s first documentary, and at times her unfamiliarity with narrative threading reveals itself. But her lack of experience also comes with a mindset freed from the shackles of conventional editing, and the aforementioned impulses currently gripping so much of nonfiction filmmaking. The engrossing result is a deceptively simple yet intimate movie which, through its up-close presentation of the complexities, triumphs and setbacks of its subjects, lights a natural fuse of empathetic connection, without need or attempt of any gimmickry or guile. Icarus Films’ DVD presentation, in a 1.78:1 widescreen presentation with a straightforward stereo audio track, unfolds in Mandarin with English subtitles, and includes an additional video interview with Li. 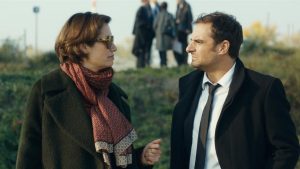 A romantic dramedy which puts a distinctly French spin, in all the best ways for Francophile intellectuals seeking out easygoing adult fare, on its familiar story, Perfumes serves up ample feel-good vibes. The film tells the story of a Parisian fragrance master, Anne (Emmanuelle Devos), whose well-ordered life and perfectionist instincts receive quite a shake-up when she finds herself falling for her rumpled new chauffeur Guillaume (Gregory Montel), who desperately needs his job to keep custody of his daughter. The chemistry of the leads is everything for a movie like this, and Perfumes delivers on that front — the actors are both very appealing — but the additionally pleasant surprise is just how layered the script is, providing further material for the performers to dig down into. “Opposites attract” is of course a romantic sub-genre to itself (and one can easily imagine Diane Lane starring in a sanded-down English language remake of this), and the comfortableness of its formula usually means lots of cut corners, narratively and technically. Perfumes, though, feels alive, and totally lived in — it’s a breath of fresh air. The DVD presentation, from Icarus Films, spotlights the movie in 2.35:1 widescreen, with a French stereo audio track, and English subtitles.

A pre-Code adventure from legendary director Cecil B. DeMille, Four Frightened People was, upon its initial release in 1934, a rare flop for the most commercially successful director-producer in film history. A revisitation shows in large part why. Based upon a novel by E. Arnot Robertson, but adapted in only the thinnest, two-dimensional strokes, the movie tells the story of two men and two women who flee a plague-ridden ship and end up hopelessly lost in a Malayan jungle. The acting here (with Claudette Colbert and Herbert Marshall as the headliners, and William Gargan and Mary Boland in ostensibly equal roles) is uneven, and the staging often uninspired. Most problematic, though, is the fact that the material just lags, and doesn’t offer much in the form intrigue; it’s well into its second half before the film develops any sense of propulsive energy or momentum. Kino’s new Blu-ray presentation, licensed from Universal, at least serves up a surprisingly strong transfer in a 1.37:1 aspect ratio, with a DTS-HD mono master audio track, and optional English subtitles.