The employees of a stylish clothing store are dying to unload the latest trendy pair of jeans in the upcoming horror comedy, ‘Slaxx.’ While the workers are eager to part with the titular pants, making a killing in sales is ultimately proving to be harder than they initially expected.

RLJE Films is set to release the feature on VOD, Digital HD and DVD on Tuesday, September 7. The DVD will be sold for an SRP of $27.97, and will include several bonus featurettes, including ‘The Story Behind Slaxx,’ ‘The Pants Are Alive, ‘Producing A Killer Pants Movie, ‘Call In The Death Consultant’ and ‘Casting Slaxx,’ as well as a behind-the-Scenes photo gallery.

In honor of ‘Slaxx’s DVD distribution, ShockYa is offering two lucky winners a DVD of the movie. To enter, email us at ShockyaGiveaway@aol.com. Let us know that you’re entering to win the ‘Slaxx’ DVD giveaway in the email’s subject line, and include your mailing address in the message. You have until Tuesday, September 7, the day of the comedy’s release, to enter, and you can enter the contest once daily. On September 7, we’ll pick the winners at random, and notify them through email. Good luck!

In ‘Slaxx,’ a possessed pair of jeans is brought to life to punish the unscrupulous practices of a trendy clothing company. Shipped to the company’s flagship store, the killer jeans proceed to wreak carnage on staff who are locked in overnight to set up the new collection. 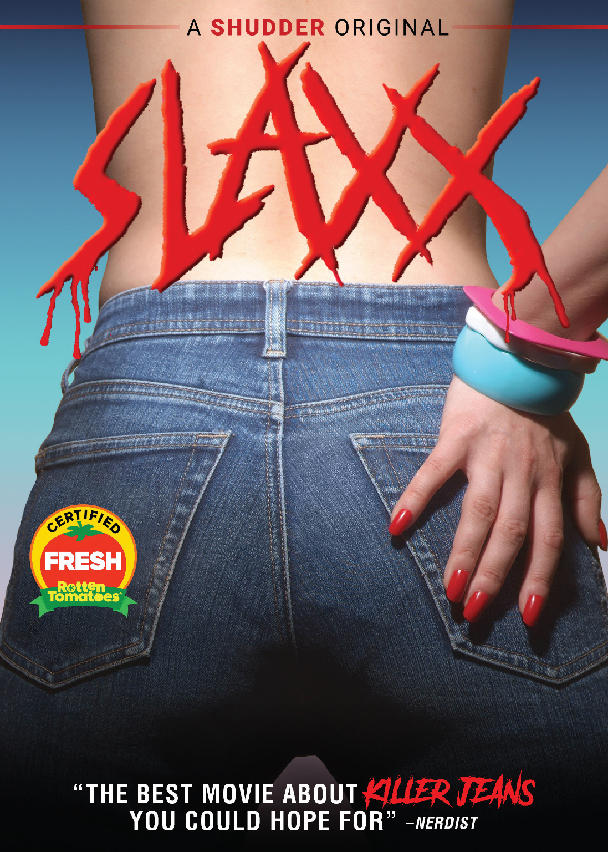