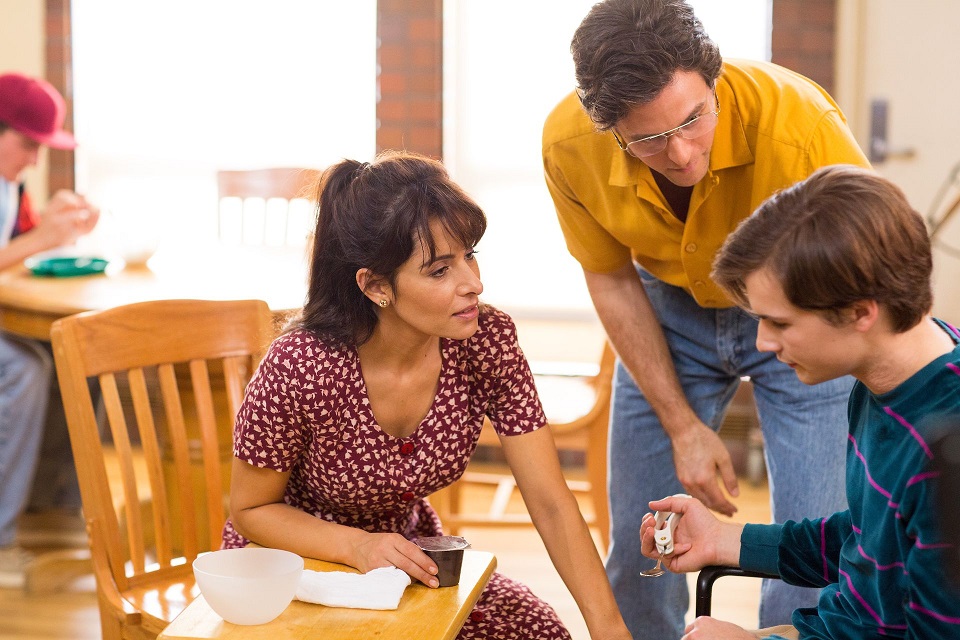 It’s horrifying to look back at history and see how those who were perceived as different have been treated. While there still is considerable discrimination in the world, there now exist many programs designed to provide special accommodations for those with learning disabilities or other particular needs. The expectation that everyone should be able to perform at the same level is problematic for many reasons, and efforts to push people through mainstream environments can be extremely detrimental. It can unfortunately be all too rare for those who see someone who doesn’t act like them to express kindness, and being a part of or witnessing those interactions can be highly influential on how a person goes about their life.

Language Arts begins in 1993, with Charles (Ashley Zukerman), a teacher, supervising programs designed to highlight those with special needs through art projects. This work has particular resonance for Charles, whose son Cody (Kieran Walton) is autistic. Raising Cody together with his ex-wife Allison (Sarah Shahi) proved to be too difficult for their marriage to sustain, and as Charles begins to understand how he might be able to bond with and relate to his son, he is haunted by memories of his childhood, where, as a star student (Elliott Smith), he had a close relationship with Dana (Lincoln Lambert), a classmate with special needs.

This film takes an interesting vantage point, spending most of its time with a character who is in many ways its least expressive. When the adult Charles first meets Allison, the attraction is clear, and he is at his most energetic, enchanted by her and eager to present his best self to her. Their courtship is idyllic, and it’s only after they marry and have a son who requires extra attention that cracks begin to show in the way that they relate to each other and to the world. Allison dotes on Cody and gives him what she either senses or knows that he needs, while Charles doesn’t apply nearly as much effort, as if doing nothing would somehow ultimately be effective given enough time.

The young Charles, on the other hand, is full of promise, a capable and intelligent boy admired by his teacher for his excellent handwriting. He watches Dana in class as he is prone to repetition and what the teacher deems outbursts that must be interrupted immediately since she believes they can somehow be controlled. Charles sits with Dana at lunch each day and shows a genuine affinity for his friend, a connection that is sharply affected by the awful tendencies of cruel classmates who see Dana as an easy target.

There are many themes present throughout this film, one that attempts to link the promising child to the older academic who hasn’t found much fulfillment since his pursuit of academia has left him otherwise alone. Understanding and acceptance are paramount, notions that should be obvious and universal but which this film shows can be elusive even for those with sincere intentions who don’t comprehend that a different way of thinking and an abundance of patience can be required to properly relate to someone else.

Zukerman, seen recently in a far different role in A Teacher, competently conveys the withdrawn attitude that Charles has as someone who has grown up not fully appreciating the value of human contact and social interaction, doubting his own ability. Shahi, a veteran of TV fare like The L Word, Person of Interest, and Sex/Life, is typically strong, capturing extraordinary emotion in a complicated situation of love and support. The film overall has its poignant moments but circumvents its ultimate conclusion a few times before eventually reaching it.