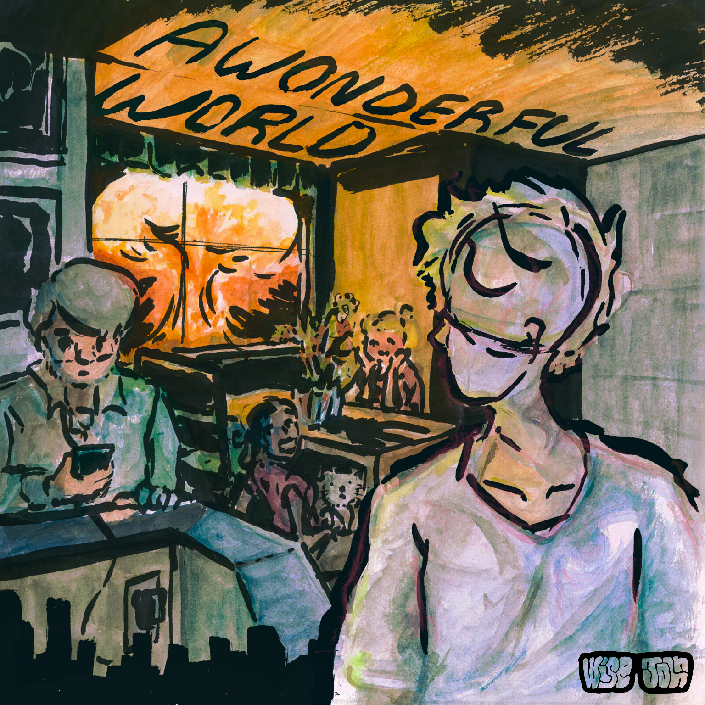 Many people’s life plans have fallen through, which led them to face a total lack of direction and purpose, during the past year-and-a-half, as a result of COVID-19. Versatile psychedelic rock singer-songwriter-instrumentalist, Wise John is sharing his wide range of despondent and discouraging emotions after a series of hardships since the start of the pandemic on his newly released 10-track debut album, ‘A Wonderful World.’

The musician, who has lived in such diverse places as New York City, Oregon and Los Angeles, wrote most of his first record while he was living in Orange County during the gloomy state of the mid-pandemic world last summer, during which time he’d also been facing his own personal demons; he’d become bedridden for months with a chronic illness at the end of 2019 and was contending with the ending of his latest romantic relationship. As a result of his despair from his traumatic experiences, Wise John created a fiery album that reflects on how it feel to see the end of times coming, while everyone around him tried to ignores it.

The autobiographical, jazz, dreampop and alternative rock-inspired ‘A Wonderful World,’ which features the artist’s signature folk rock sound, is also inspired by such musicians and groups as David Bowie, Elton John, The Beatles and Radiohead. A passionate lyricist and songwriter since childhood, Wise John’s music and storytelling draws upon his love of fantasy and politics, as well as his own stranger-than-fiction life. Currently based out of Brooklyn, he’s started penning songs to make sense of his life, including his illness and failed relationships, with the aid of electronic instruments and the jazz piano.

‘A Wonderful World’ begins with the atmospheric entry, ‘Won’t Somebody Let This Caged Bird Fly?,’ which introduces listeners to the singer’s soothing, soulful perfectly pitched vocals that are reminiscent of John Lennon and driven by stellar jazzy piano lines. The introductory song is an emotional introduction into his feelings of freedom and the meaning behind it. The wistful piano ballad features a vulnerable plea from Wise John to be given the freedom he so long desires, while also wanting to be included and accepted by the people he cares about. The enthralling opening track offers an introspective look into what it means to be set free.

‘Won’t Somebody Let This Caged Bird Fly?’ is followed by the pulsating sophomore tune, ‘Leaving LA,’ which features a more layered sound with its booming drums and smooth, charming synths. Driven by a stunning mix of ’70s pop and contemporary indie alt-rock sounds in the musician’s vocals and instrumentals, including a bright chorus and hypnotic piano chords that would fit right in at a late-night lounge, the ballad is an emotional tribute to the love/hate relationship he has with the City of Angels. The song, which is reminiscent of the Beatles’s rock sound, is one of the highlights on the record, as Wise John croons in lush vocals about his desire to leave the title city, despite the fond memories he’s created there.

Another noteworthy entry on the artist’s debut album is its fifth-and title-track. ‘Wonderful World,’ which also features his captivating, signature lounge vibe as he ponders whether the life of luxury is a cardinal sin or merely the reward for the deserving. The gentle piano ballad is the perfect contemplation on the highs and lows of a privileged world. The track’s lyrics also ponder how fortune is something that not everyone is able to experience, which leaves the masses who aren’t able to partake in it wondering if the exclusive world is so truly wonderful.

The ‘A Wonderful World’ record begins to wind down with its penultimate entry, ‘Me & My Piano,’ which features Wise John crooning his latest nostalgic lyrics with tender tones. The sentimental jazz tune is a stripped-back ballad that’s filled with sorrow and emotion, as he ponders why he has lost love, and how music can help him heal. Inspired by the pop-rock songs of fellow singer-songwriter-piano player, Billy Joel, Wise John passionately croons about the instant connection he felt with a woman he just met, but was unable to maintain a relationship with after their first meeting. He adds in poignant vocals that he’s now playing music to reflect on the pain of not being accepted by the woman he felt drawn to, as he tries to contend with his feelings of loneliness.

The musician’s debut album ends with the stellar, falsetto-driven entry, ‘Borderline,’ which features folk-driven rhythms and strong melodies that won’t soon be forgotten. Through the pulsating beat of the guitar and elegant vibe of the piano, Wise John proves one last time what a versatile, stellar artist he is, and how his relatable struggles in life effortlessly resonate with fans of the pop, rock and jazz genres.

Wise John proves what a versatile singer, songwriter and instrumentalist he is by sharing his wide range of despondent and discouraging emotions after a series of hardships since the start of COVID-19 on his newly released autobiographical debut record, ‘A Wonderful World.’ The passionate musical storyteller fearlessly reflected on, and shared, the pain of his chronic illness and several failed romantic relationships to create an array of relatable, passionate songs. From ‘Won’t Somebody Let This Caged Bird Fly?,’ the emotional introduction into his feelings of freedom and the meaning behind it, to ‘Me & My Piano,’ which features nostalgic lyrics that ponder why the artist has lost love, the collection of powerful tracks perfectly highlights how music can help everyone heal during their most difficult times.