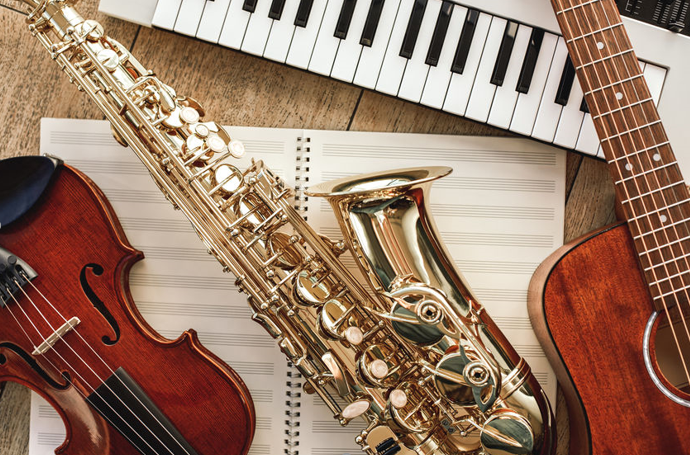 There are several ways to sip in the joy music gives. Yes, we all love music – although our tastes may vary. While most of us like to simply listen to good music, others become part of music by playing a musical instrument or the other.

This article covers the various types of musical instruments played by popular artists. Enjoy the ride.

Musicians and producers around the world are fond of using the piano for making inspiring music, the best ears would ever listen to. This powerful instrument can be used to entertain people as well as be enjoyed by individuals who pay for it.

This instrument oozes a peculiar sound that can’t be found in other band instruments. It’s a unique musical instrument. The cello has that distinguished tone that is good to go with almost all other instruments when combined.

If you enjoy some solo music, the cello offers great performance. The sound brings relief to the soul. A closer unique instrument that provides beauty is the violin. Kids love the cello too. Parents can make their kids learn this instrument from age five.

The electric guitar has recently been making waves among some of the well-played musical instruments among artists. Those strings hypnotize the soul into good and positive feelings. Good food for the soul.

Thanks to the increase in popularity of music and artists that celebrate rock and roll, plus the pop genre. That’s not all, countless movies and videos featuring artists playing with those melodious strings have wooed millions of fans.

We now have several video games where people can play the guitar, think the very popular Guitar Hero.

Today, there are massive sales of materials promoting electric guitar lessons as well as the sales of the instrument itself.

Here are some of the popular artists who play the Electric Guitar so well: Jimi Hendrix, Brian May, Eric Clapton, Alex Lifeson and Dand Gilmour.

Even though most people have underrated this instrument, it remains one of the most popular musical instruments played by popular artists. The bass guitar is a key instrument in so many music genres – some can’t do without it.

When you look at this musical instrument keenly, it is way easier to learn than other instruments in the same class.

Probably one of the cheapest music instruments, the flute is another peculiar tool that delivers good sound. It can be played for fun as well as used for making nice music. Snakes love its gracious sound.

Portable and easy to learn, you can’t go wrong if you engage your kids with flute after a long working week. The flute can be the very first for your kids to learn how to play.

Some of the popular artists who play the Flute include James Galway, Emmanuel Pahad and Matt Molloy.

Ever wonder what musical instrument produces some of the most unique sounds in the world? The violin must be on top of the list. This instrument has been used for making good music for centuries. It is as old as man.

Also, if you need an instrument that perfectly blends with deft music genres, you won’t go wrong by integrating this powerful tool.

A few of the most popular violin players include Hilary Hahn, Itzhak Perlman and Jascha Heifetz.

It also include a great amount of electronic musicians, on whatgear you will find their production tips and the digital equipment they use to produce their music, including the best sample packs for electronic music, audio softwares, and paid or free audio plugins and softsynths.

Music heals the soul. What complements good music is mostly the sounds that go with it. Many popular artists love to blend these instruments into their works. Some artists are also exceptional players. Visit Whatgear Music to learn more about top music artists.