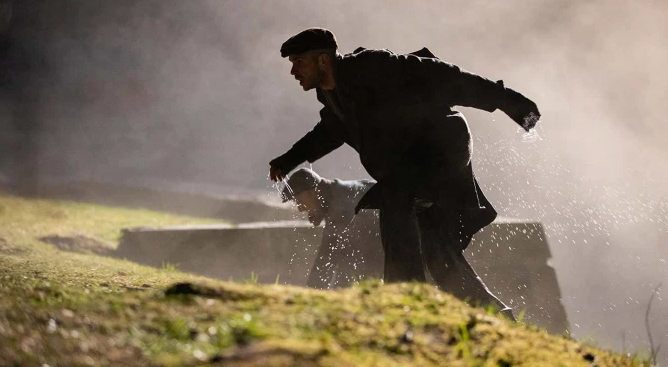 There are countless stories of atrocities committed during the Holocaust, and to many living in relative comfort and safety then and now, they may be completely unimaginable. There is little other explanation for the failure of the world to intervene in time to save the lives of millions killed in concentration camps. But the scope of the Nazi conquering and decimation of Europe was so tremendous that every country has its own specific story of national efforts to resist and the large populations wiped out during that time. The Auschwitz Report, which served as Slovakia’s official Oscar entry for Best International Feature last year, is a harrowing tale of courage and perseverance in an unthinkable and seemingly inescapable situation.

Rudolf Vrba (Peter Ondreji?ka) and Alfréd Wetzler (Noel Czuczor) were deported from Slovakia in 1942 and sent to the Auschwitz concentration camp. Their work as scribes enabled them to pay close attention to who was coming into the camp and the horrifyingly high numbers of Jews and other prisoners who were exterminated. Determined to get the information they had carefully written down to Slovak authorities so that they could send planes to bomb the camps, Vrba and Wetzler staged a daring escape, uncertain of whether they would make it out alive and fully aware of the unfortunate implications for those they left behind.

This film begins in Auschwitz and then splits into two different narratives, one of the two men as they hide out and wait for the right moment to get as far away as they can and the other of those imprisoned within their barracks who are forced to contend with the fury of the vindictive Nazi guards. Knowing how important and transformative their successful transmission of damning data to Allied authorities with the proper reach could be motivates Vrba and Wetzler to continue on, even as they face an entirely unknown fate, one that, as one Nazi guard boasts, could easily result in townspeople turning them in.

Like many other Holocaust narratives in film and literature, this film does an extraordinary job of showcasing the unending torment of those rounded up and targeted by the Nazis. It is truly an ordeal to watch as emaciated, frightened men are forced to stand outside in freezing temperatures as they are taunted and told that their desire to eat or to survive is somehow selfish or unreasonable. This cannot possibly be viewed as anything like a prison or prisoner-of-war camp: cruelty and dehumanization are key parts of the Nazi philisophy toward what they deem the undesirable. As was surely the case for the millions who lived through it, there is no break from it, and a camera edit or cut to where Vrba and Wetzler are is a welcome moment of respite from the misery.

This film is based on a true story, which does mean that it can’t modify history and save the many who might have died if their report had been published in its full form and acted upon by forces who realized the extent of what was being done. The most grievous offense highlighted is the denial harbored by those who sought to minimize or explain away what the Nazis were doing as not all that terrible or somehow defensible since Nazi doctors were the ones treating patients for typhus, which could in some manner make them not responsible for herding people into situations where contracting it was inevitable.

This cinematic realization of a Slovakian story is, like so many other films and books about the Holocaust, vitally important. Anyone who claims that they have heard or seen a version of this before should understand the problematic and contradictory nature of that statement, since injustices are still committed today on national and international levels that should be prevented but are all too often not because of the passive inaction of governments and armies with the power to do something about it. Vrba and Wetzler were extraordinary people who risked everything to help others, and their heroism can teach future generations a great deal about doing the right and difficult thing when it feels like there is no hope.