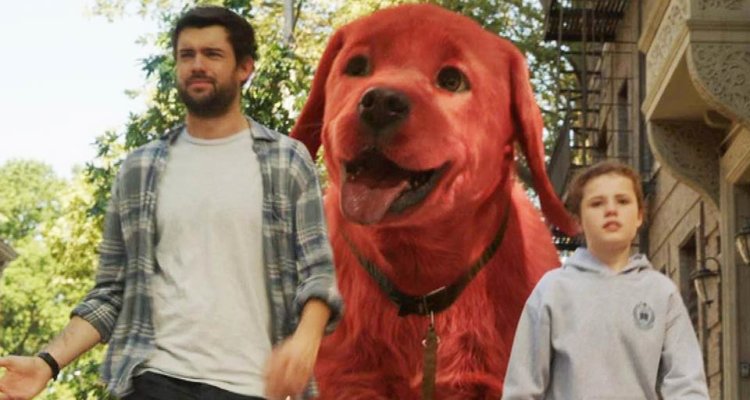 The unconditional love between humans and their pets can ultimately help people overcome the differences in the way they view each other and the overall world around them. That’s certainly the case with the human – and animal – characters in the upcoming adventure film, ‘Clifford the Big Red Dog.’

Based on the Scholastic book series of the same name that was created by author Norman Bridwell, ‘Clifford the Big Red Dog’ was scribed by screenwriters Jay Scherick, David Ronn and Blaise Hemingway. Walt Becker directs the family comedy, which Paramount Pictures will release in theaters and on Paramount+ this Wednesday, November 10.

‘Clifford the Big Red Dog’ follows genuine, relatable sixth-grader, Emily Elizabeth (Darby Camp), as she’s trying to cope with her recent move to New York City with her single mom, Maggie (Sienna Guillory). Emily is struggling to fit in at her new private middle school, where the popular girls tease her for attending on a scholarship. Maggie, a paralegal, tries to cheer her daughter up before she has to fly to Chicago for a work trip, during which time her brother, Casey (Jack Whitehall) watches Emily.

While Casey accompanies Emily to school one day, they stop at the magical rescue shelter that’s set up near her school and run by the mysterious Mr. Bridwell (John Cleese). While there, Emily happily discovers Clifford, who’s a small puppy, but much to her dismay, her uncle doesn’t allow her to adapt the animal.

After the rest of the day turns out to be difficult for Emily at school with her pretentious classmates, she’s surprised to find that the title dog hid in her backpack. After some pleading on Emily’s part, her Uncle Casey reluctantly agrees to allow Clifford to spend the night in the apartment. But after she wishes that the puppy was big and strong enough to protect her before going to sleep, she wakes shocked to find that Clifford has mysteriously grown to be 10-feet tall overnight.

Casey and Emily then decide to track down Mr. Bridwell for help with Clifford, during which time the dog’s spotted by their fellow city residents and reported about on social media and the news. While watching the news reports, a tech entrepreneur, Tieran (Tony Hale), sets out to kidnap Clifford for his own greedy purposes, as his company in part cultivates genetically modified animals. In protest, Emily and Casey garner the support of her classmates, neighbors and the city to protect her dog from Tieran’s sinister intentions. Along the way, she learns the true meaning of friendship and the importance of people believing in themselves.

‘Clifford the Big Red Dog’ is an epic family adventure movie that enthrallingly combines important, sentimental life lessons with stunning visual effects. Scherick, Ronn and Hemingway wrote a script that perfectly combines Emily’s loyal and kind nature with her relatable desire to find unconditional love in a friend while having some fun.

Camp was perfectly cast as the young protagonist in the adventure film, as she effortlessly brought the close rapport that develops between her character and her new dog front and center throughout the story. The actress naturally highlighted Emily and Clifford’s acceptance of each other as they both strive to navigate the new life they find themselves in.

While the tween is contending with a somewhat more mature set of problems in modern society in the franchise’s new movie than in its source material, the screen adaptation is also driven in part by memorable humor. From Emily’s witty jokes about her developing friendships with Clifford and her classmates and neighbors to the quips that Casey gives about the unique situation he’s found himself in with his niece and her new dog, there’s humor that appeals to all generations throughout the story.

‘Clifford the Big Red Dog’ also stands out as a noteworthy family adventure comedy through the help of one of its most important elements-the photorealistic CG animation that brought the title character to life and its supporting state-of-the-art visual effects. Becker worked with puppeteers Rowan Magee, a member of Phantom Limb Company, and Jon Riddleberger, who has performed around the world with Handspring Puppet Company, to create and operate a puppet of the extraordinarily large title animal that interacts with Emily and the other humans in her life.

The enormous Clifford puppet was operated on the set to not only serve as a reference point for Camp and her co-stars during their interactions with the dog, but also the animators at MPC, the visual effects house that brought the CG dog to life during the film’s post-production. While the CG animation is robotic and mechanical-looking in occasional moments of the feature, the overall resulting image of Clifford on screen is as realistic as can be for a 10-foot dog.

Camp’s stellar acting, combined with the comedy’s vital and universally relatable life lessons, amusing humor and stellar photorealistic CG animation, make the movie an instant family classic that appeals to both children and the adults in their lives. Becker stunningly adapted ‘Clifford the Big Red Dog’ for the screen, as the feature reminds its audience that no matter what hardships they endure, they can overcome their difficulties through absolute faith in themselves and the love of their family and friends.